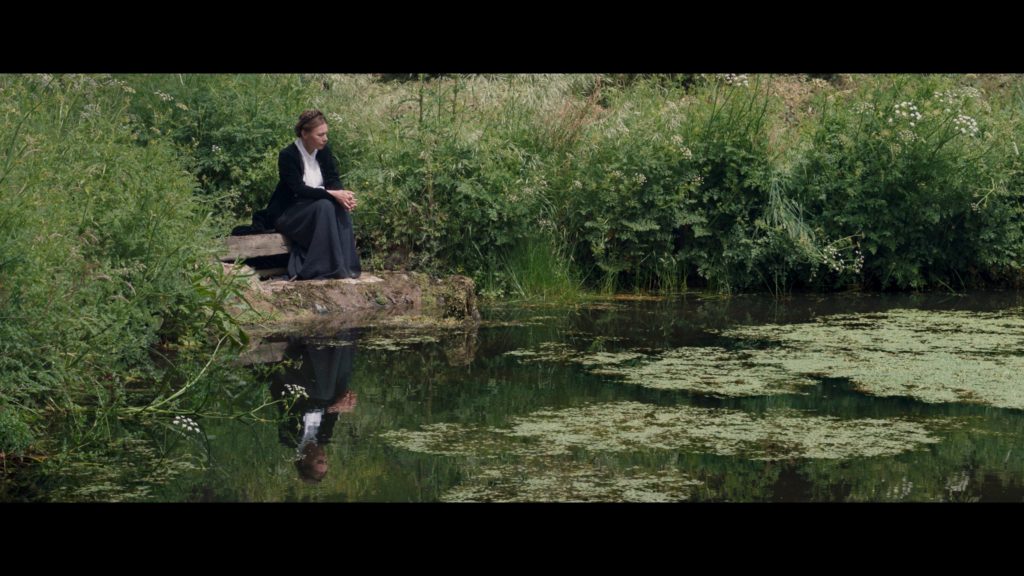 If there was a silver lining to our long, semi-enduring stint in quarantine, it’s that it spurred many of us to pick up new hobbies or artistic pursuits. Some took up baking (how many of us first heard the phrase “sourdough starter” for the first time during the pandemic?), while others picked up a musical instrument or learned a new craft. And Frederick Wiseman– the Cambridge-based, nonagenarian filmmaker behind such epochal documentaries as Titticut Follies and City Hall– made the first narrative feature of his 47-film career*.

Actually, “narrative” might not be quite the correct word for A Couple; it does not contain a “plot,” in the conventional sense, and its cast consists of a single member. That would be French actress Nathalie Boutefeu (a frequent collaborator on Wiseman’s stage productions), reading from the diaries and letters from Sophia Tolstoy to her husband, the esteemed writer Leo Tolstoy. In the film’s opening scene, Sophia sits down at her writing table, addressing the camera: “The first thing I feel like doing today is to write to you, Leo.” But as she dictates, she gets up from her desk, wandering through her gardens and down to the seashore, all the while ruminating on her life with, and tempestuous marriage to, the certified Great Man. Leo, for his part, does not appear, but does get the occasional word in edgewise; Sophia occasionally recites his words, either off the page or as if recalling a prior conversation. Even then, though, she can’t help but add her own interjections, or perhaps just a withering eyeroll. Make no mistake: though Tolstoy is the name, this is Sophia’s side of the story.

On paper, A Couple sounds like as much an academic exercise as a movie, and to a certain extent I suppose it is; I imagine I would have a much more nuanced reaction if I had a greater familiarity with Tolstoy (both of them). But the portrait that Wiseman and Boutefeu (who collaborated on the screenplay) paint through Sophia’s words is universal. Sophia Tolstoy died over a hundred years ago, but her perspective feels startlingly modern: she’s every brilliant, talented young woman constantly overlooked in favor of her (male) better half. Understandably, her words course with bitterness. “Your power crushed my life,” she bemoans, “and my personality as well.” Yet that bitterness is mixed with all of those messy human emotions: affection, self-doubt, the instinct to preserve what one has. A Couple is a film built entirely on centuries-old writings, but Wiseman and Boutefeu make Sophia Tolstoy seem as alive as anyone. One can see what drew one of our preeminent documentarians to tell this story; it is a narrative, but it’s also an account of a true and remarkable life.

Of course, all films, in a certain light, can be viewed as documentaries about their own production, and pandemic films doubly so. A Couple was shot in early 2021– when vaccines were being administered, but reopening was still in its tentative early stages– and its outdoor setting can’t help but recall the picnics and walks through the park which served as the extent of COVID-era socialization. Even filming staged action, Wiseman’s camera can’t help but take a fly-on-the-wall interest in Boutefeu’s surroundings: flowers, waves crashing on rocks, the ducks on the pond, a dew-dappled spiderweb. And viewers in the know (will there be any casual viewers of this film?) will scarcely be able to consider it outside the lens of its place in Wiseman’s extraordinary career. In this way, A Couple takes on a meta quality, as much an objet d’art as a film unto itself.

A Couple is a curiosity, to be sure, and will inevitably be of most interest to Tolstoy scholars and Wiseman completists. But, taken on its own terms, it is far from inessential. Its sumptuous photography and well-mapped sense of place make it a mesmerizing, entirely captivating way to spend an hour (its lush, verdant setting particularly welcome as this Massachusetts winter seems to be beginning in earnest). And Boutefeu’s performance is a work in its own right, urgent, masterful, and heartbreaking from beginning to end. Wiseman’s work has always been interested in human nature, and the framework of A Couple simply provides him with an alternate means through which to view it. Taken as part of the Wiseman oeuvre, it is a quietly revolutionary work, one which secures his status as one of film’s most vital voices. Would that we all took this cultural moment as an opportunity for such betterment.

* – Give or take 2002’s The Last Letter, a filmed version of a Wiseman-directed stage play.