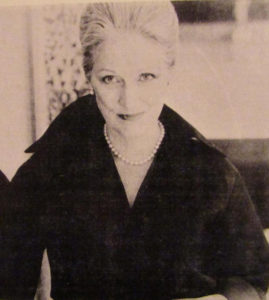 In celebration of her 108th Birthday, we remember Peggy Stuart Coolidge. Peggy was a composer, conductor, and pianist who later used her talents to be a music therapist for a mental hospital in New York. Peggy was born on July 19, 1913, in Swampscott. Her musical journey began at the age of five when she started piano lessons; at age nine, she began composing.

While she attended the New England Conservatory, Peggy studied piano with Heinrich Gebhard—a pupil of Theodor Leschetizky—and later Raymond Robinson. During World War II, she was part of a housing bureau of servicemen stationed in Boston and often would play for hospitalized soldiers. Later, she became the pianist for the Women’s Symphony of Boston.

Peggy made waves as an accomplished conductor of the time, leading an all-woman ensemble in Boston and later becoming the assistant conductor for the Women’s Symphony of Boston. She also founded the Boston Junior League Orchestra.

As for her composition, Peggy studied with Quincy Porter in Boston. At just 24 years old she had composed what is thought to be one of the first ice ballets, Cracked, which premiered at Madison Square Garden. While she saw herself as more of a performer, there is no denying that Peggy was one of the leaders in the Boston women’s music scene. However, she wasn’t limited to one style of composition; in the late 1950s, Peggy started writing music for Hollywood and Broadway productions. She was also known internationally for her compositions In 1963, she visited Austria and Hungary, where she established ties to Eastern Europeans. She also became good friends with the Khachaturians, allowing her to become, at the time, the only one-composer concert presented in Moscow by an American.

Just when Peggy seemed to be lost to time, Boston’s own Boston Landmarks Orchestra played her piece “The Blue Planet” for narrator and orchestra on July 14, 2017. As the call to remember and perform more works for women becomes louder  we see great composers and musicians like Peggy Stuart Coolidge come to light.

Liked it? Take a second to support Monica Lange on Patreon!