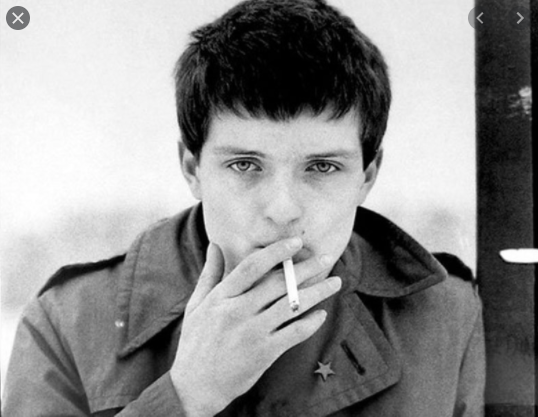 Prior to his death, Ian Curtis was both the lead singer and lyricist for the Mancunian band Joy Division. Upon its inception, the band was actually called Warsaw after the Bowie track, “Warszawa’, however after learning that another punk band had called themselves Warsaw Part, the foursome decided to change their Name to Joy Division, a term used to describe a select group of Jewish women used for the sexual gratification of the Nazis during the Second World War. This rather questionable name choice paired with the Hitler youth artwork on the band’s first album cover led the members to constantly insist that they weren’t Nazis themselves. Merely, it was the punk thing to rile people up, and it was Ian’s MO to explore these darker subjects.

According to his bandmates, if Ian wasn’t writing or piecing together lyrics from his magical “box of words” then he was reading. Kafka, Sartre, Burroughs. The stories he read greatly influenced his lyrics as did the events in his life. “She’s Lost Control” was written about a young woman he helped during his time at the Macclesfield Employment Exchange, assisting young adults with disabilities in finding jobs. He called her on the telephone one day to check in as he cared deeply for those he worked with and he was shocked deeply to find that she had passed away from an epileptic fit, this shortly before Ian himself would have his first seizure and receive his epilepsy diagnosis. In a case of heinous timing, his diagnosis came just as the band started to play more gigs and become more popular, and the seizure coming at the heels of their first ill-attended London performance.

Despite the epilepsy diagnosis and his doctor’s insistence that Ian avoid late nights, recreational drugs, and alcohol, Curtis continued gigging with the rest of Joy Division as the band gained popularity under Rob Gretton’s direction. Despite his seizures increasing in severity, to the point of him often seizing mid-performance with the remaining members having to drag him offstage, Ian continued to put all he had into his music and his performances, especially with his trademark, trance-like, dancing.

Joy Division’s iconic first album was recorded in 1979 by Martin Hannett. The full-length debut includes some of the band’s most well-known tracks and the sleeve is emblazoned with Peter Saville’s artwork of a pulsar, a dying star, which can still be seen plastered across t-shirts and posters found in mall shops and online stores. Many who do not know Joy Division purchase their merchandise for this image. This dying star, the sole album recorded, produced, and released during Curtis’s lifetime has been going 40 years strong.

Despite the band’s ever-increasing popularity and success, which grew to include performances across the UK as well as Europe (where it was said that he met his infamous music journalist girlfriend, Annie Honore) as well as a televised performance on Tony Wilson’s popular nightly program, “And so it goes…”, and ultimately being signed to Factory Records, the pressure balancing fame as well as having a family, trying to choose which woman he wanted to devote his time to, the guilt of cheating, and the weight of pleasing his audience began to severely affect his mental state. The final blow was when Curtis’ wife, Debbie discovered his affair with Honore and asked for a divorce.

His bandmates were justifiably shattered. They all felt that they should have seen the signs in his writing. Bernard Sumner himself says that they didn’t really listen to any of his lyrics, that they all seemed too personal, so they didn’t notice Ian’s inner turmoil. To shake matters, they were expected to still pack up and head to America to tour. How? They were undefined now, lost without the head of the band, their lead singer. According to Joy Division lore it was posed (supposedly by Ian himself) that if one member “left” the band for any reason the remaining members would continue on and re-form into a separate band called New Order. Essentially, it seems like he had been preparing them for his absence.

New Order was formed in the wake of death. The death of a bandmate and friend. The death of an artist and singer. The death of a phenomenal band. The death of an icon still worshipped by so many of those who were born well after he had died. New Order took their pain and merged what they learned from Ian and formed their own synth saturated, dark, dance music birthed from their lives, their experiences, and their first tour without their dear friend. They became the forefathers of New Wave, a genre truly for the 1980’s. The band has lasted well beyond it’s formation and is still touring today, with their most recent string of US performances with The Pet Shop Boys delayed until 2021 due to the coronavirus pandemic.

Ian Curtis has been…a patron saint to me. I discovered Joy Division in late 2007 during my senior year of high school. I sat on the floor of my bedroom with headphones plugged into my boombox. I hated my parents, wore only black, never smiled. I had taken four years of AP English and was headed to a tiny New England art school to be a poet and music journalist. I had a history of self harm. Music was the single thing I clung to during the most turbulent times in by life. As I listened and re-listened to Unknown Pleasures I realized how much of it applied to my life as my life changed. During the 5-hour move to New Hampshire, during my first poem workshops and edits, during the four years that would be the happiest of my life, Ian’s voice was a beacon, understanding, empathizing, and carrying me through the most difficult, the funniest, the highest times. I felt him so deeply that my senior thesis was a poetry collection based on him, based on Manchester, based on Joy Division. I spent hours, days, during 2010-2011 studying the band, reading anything I could get my hands on, listening upon listening and then listening again on my record player in my dorm room. Ian’s voice is still a comfort in my darkest times, and even now through some of my worst heartache. For my 30th birthday I bought myself a “Love Will Tear Us Apart” tattoo. Cliche, maybe but I needed it there to remind myself that I had survived, I guess.

Ever more recently the hum of underground Joy Division fans has been growing ever louder. We’ve been coming out of the cracks. I don’t what is forcing us above ground. Joy Division’s music has been present in more Netflix produced, binge-worthy TV shows such as Stranger Things and Thirteen Reasons why Why. The band march can be easily acquired offline or in mall stores such as Hot topic. We wear the clothes like armor and we use the music in lieu of therapy sessions. That’s what I’ve done. That’s what I will always do I’m sure.

The onset of recent events and our collective rage/surge to act/while still being unaffected forms a new breed, the breed that craves Ian’s words. The Coronavirus pandemic has us screaming into our pillows at night and we need the faith of a band like Joy Division. The underlying understanding and the magnetism that says, “I am here and I feel you.” A band that is literally “touching from a distance.”

Local cultural developer and Harlem-transplant, Billy Dean Thomas has been hyper-focused on expanding the quality and reach of Boston’s hip hop scene. …