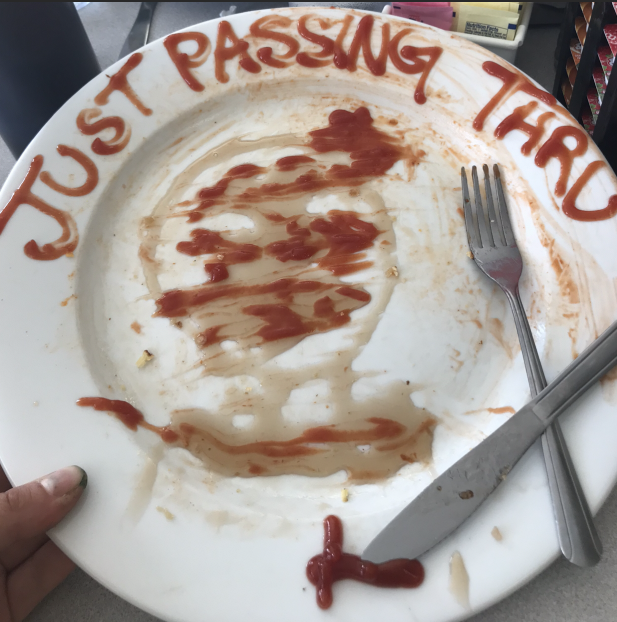 Why, yes, the rumors are true.  Allston is indeed a shitty, stinky rat town.  But it’s got an undeniable spark that people are catching onto, and I, for one, have commenced nail-biting. Our garbage legacy has more to contend with in December of ’19 than it did the previous year.  On one side, certain institutions that rhyme with Shmarvard and NB Shmevelopment threaten to powerwash the grime off of every brick.  On the other, folks with misplaced senses of sentimentality will cry foul at the lack of grossness while missing the larger point of gentrification and how it targets familiar, deeply-ingrained character and ways-of-life.  Y’know.  The stuff that makes Boston Boston.

I hope not to sound too precious about all the T inaccessibility, public drunkenness, and rodentia that goes down in Allston town.  It’s true that it grows on you, and that the BH pastime of reveling in our city’s shittiness  can turn any bad night into a hilarious one.  But it’s not the ugliness of Allston that I love so much.

I’m drawn to the balance of old and new; in truth, the people and institutions of Allston are perfectly regenerative.  My folks used to shoot pool at The Silhouette.  My oldhead neighbors (you’ll meet them again) have sat on their front stoop for decades and watched as students moved in and out of the building.  People at bus stops or behind counters will show up again at shows or in line for coffee.  Allston is a place of infinite transience mingled with total familiarity and comfort.  It’s a peaceful ecosystem where occasionally you’ll find a rat in your shower.  It’s worth documenting, and sometimes celebrating.  Happy New Year to Allston, and to us all.

Discover secret window in apartment that looks out onto three-story air shaft.  Is it an air shaft? There’s a roof over the top. Light doesn’t reach the bottom.  Emits a murky, swirling, chaotic energy. Spent an hour dropping down glow sticks, watching them disappear.  Hard to hear them hit the bottom. Think they do.

Attempt to have a party.  Invite 70 people across city and inner suburbs so that ideally fifteen people attend.  Seven people show up, drink all the booze, and eat all the pizza. Success! 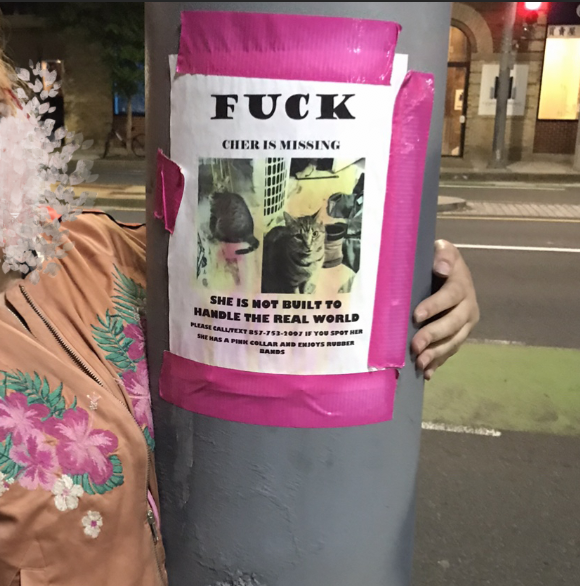 Stuck in apartment for 30 min while building management hauls a toilet out of neighbor’s place.  After they successfully remove it, they leave it in the stairwell.

“So you think it’s referring to you?”

“Does it make you feel unsafe or anything?”

Toilet in stairwell for one week. Start to look forward to seeing it every day.  Name it Albert. 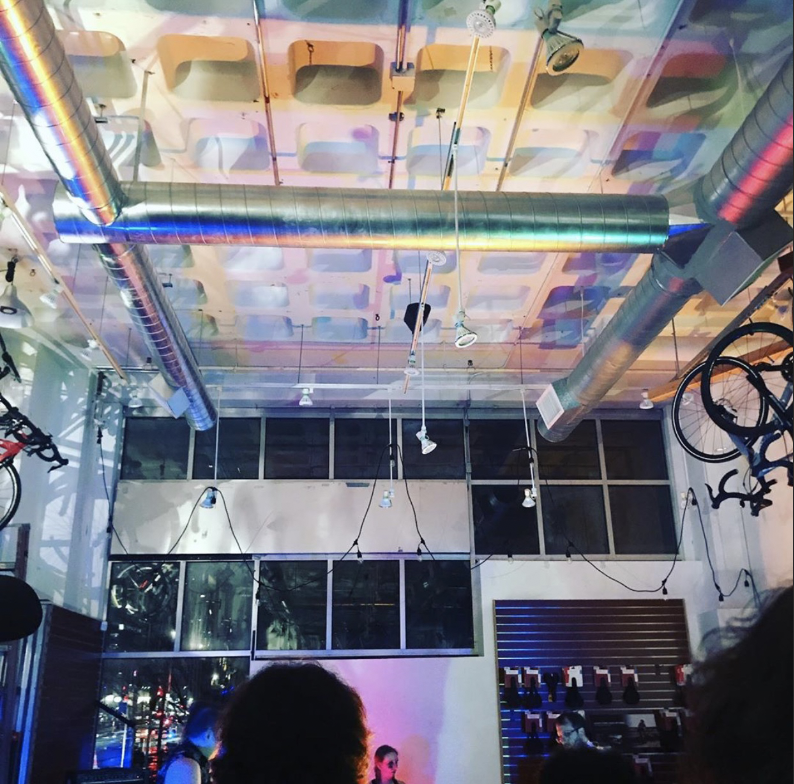 Service EP release ft. Dust From 1000 Years and Dim-Lit at bike shop on Comm Ave.  Group of hardcore noise fans clustered between racks of bicycles listening to Luca & co. scream, spit, grind, and get primal.  On top of all the grit and snarl, the colored lights look really beautiful reflected off all the metal spokes and handlebars. Not a lot of dancing, but that’s okay.  Our people don’t really dance aboveground in Allston.

Basement show in Lower Allston.  Forget venue name, location, and most of the bands by the morning.  Think the Bin Men might have been there? Spend last half hour @ the gig convincing everyone to take a field trip to The Model.  Finally get about four takers. Confidently and drunkenly run across the bridge, past the intersection, and up Cambridge St. Bouncer says they’re not letting anyone else in.  Strongly suggests we all go fuck ourselves.

Neighbor knocks on door, asks if she can drop something down the creepy air-shaft.

“What’s that in your hand?”

Manage to convince her the dumpster out back is just as good. 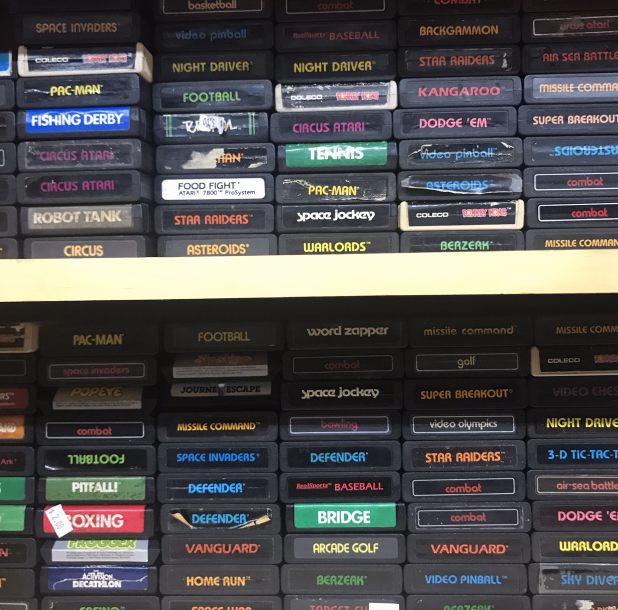 Celebrate one-month anniversary of Albert the Toilet in the stairwell.

Run into old professor on the street.  Attempt to say hi; ignored. Ten minutes later, get an email from him on university account.

“If you’re taking the 57 bus, use the Gordon St. stop instead of Barrows St. You’re almost 90% more likely to get a seat.  Don’t know why it works, but it does.”

Switch to using the Gordon St. stop when taking the 57 bus.  Get a seat almost every time. Don’t know why it works, but it does. 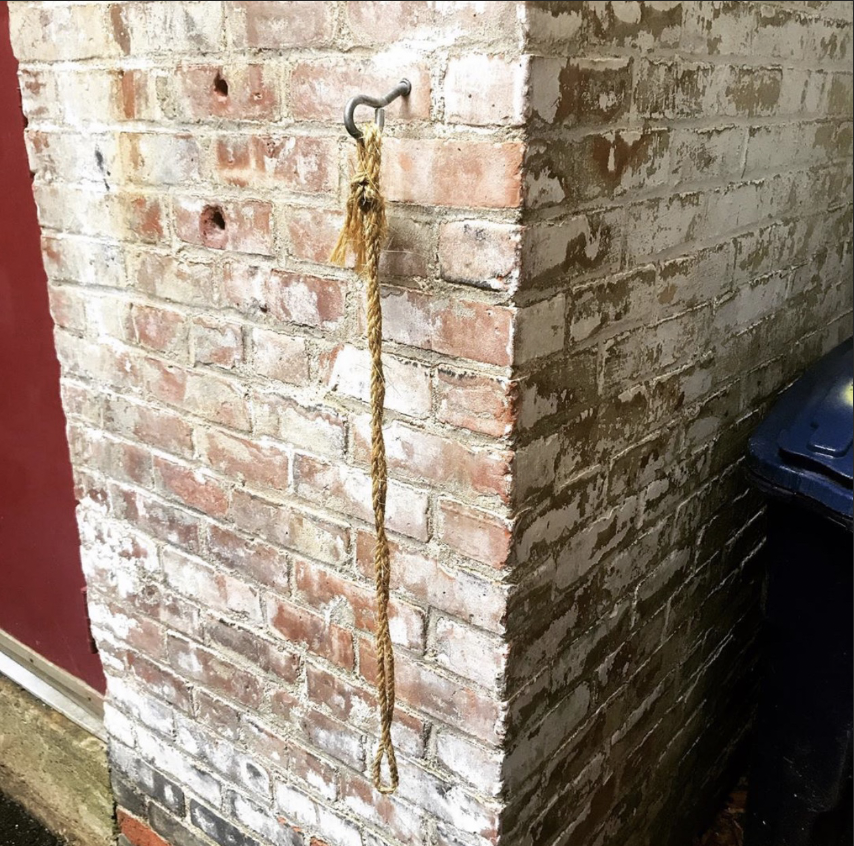 Friend visits from Brooklyn and refuses to jaywalk.  Try to convince them that it’s actually safer to jaywalk here than anywhere else in the country.  They don’t buy it. Takes 20 extra minutes to get to Kupel’s. The line is ridiculous. Techno and electronic show at Out Of The Blue.  Mark Lamp, FEN, J Bagist, and LIMBC.  Remember FEN on a blanket on the floor with all her gear spread around her like picnic food, sampling from this and that.  Projected blue and purple visuals in everyone’s eyes. Dreamy glitch underwater love. Spill out onto the street afterwards and the warm air infects everyone’s air-conditioned skin.  Asleep but awake.

Get voicemail from friend tipping off about a position opening up at Mr. Music.  Friend’s mom knows the owner or something. Total shoo-in? Maybe? Gotta act fast.  Have to hoof it from housekeeping gig in Harvard Square. Take the 66 back with cart of cleaning supplies balanced against hip like a baby.  Arrive at Mr. Music in a pool of sweat. Position filled earlier that morning, but they’ll definitely keep my number on file. Go home and immediately get heat stroke.

Get job at a vegan place on Cambridge St, nestled between two other vegan places.  General manager has a tattoo of Nietzsche on forearm. Find self staring at it a lot – it stares back. 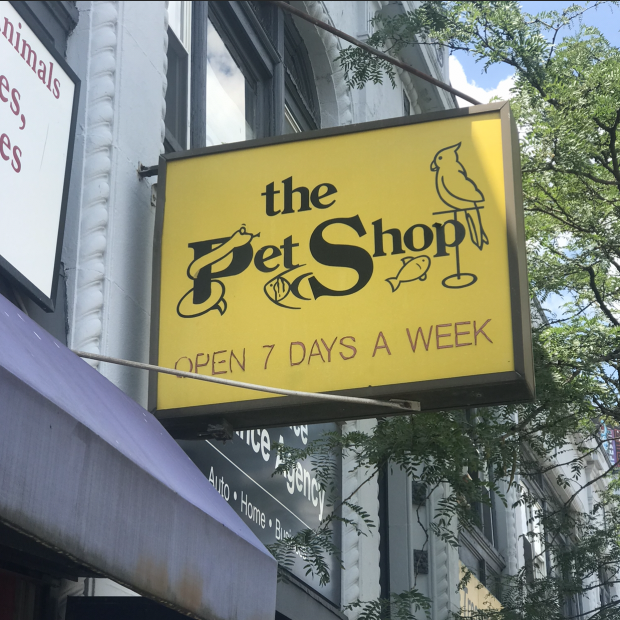 Spend 4th of July in Ringer Park.  A few feet away, group of BU kids throwing empty prosecco bottles down the hill, watching them shatter on the concrete below.  A man comes up, towing dog on a leash. Yells at each group of revelers, one by one.

He stalks past the BU kids, and one of them calls out:

“We’re so sorry!  We have no idea who would do something like that to a defenseless animal.  We’ll find out who did it. So awful.”

Waiting at 66 stop.  Shirtless guy in pajama pants on roller skates asks what I’m “doing after this.”

Albert the Toilet is gone. 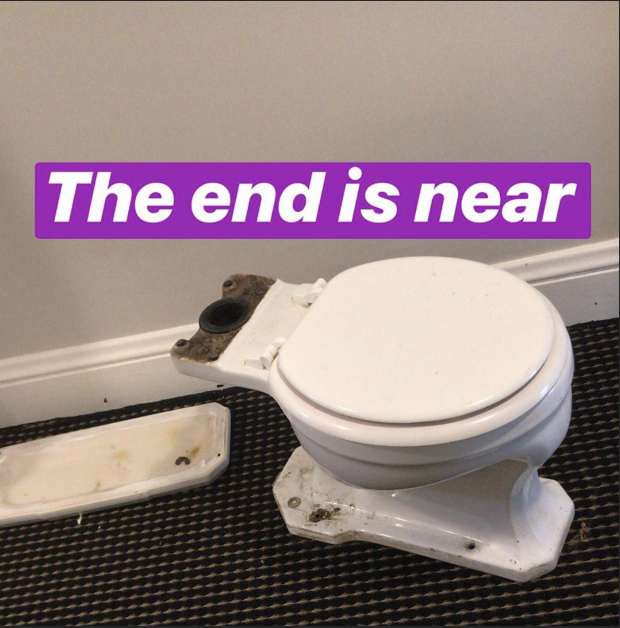 Albert the Toilet is not gone.  Building management just moved him to the back stairwell. 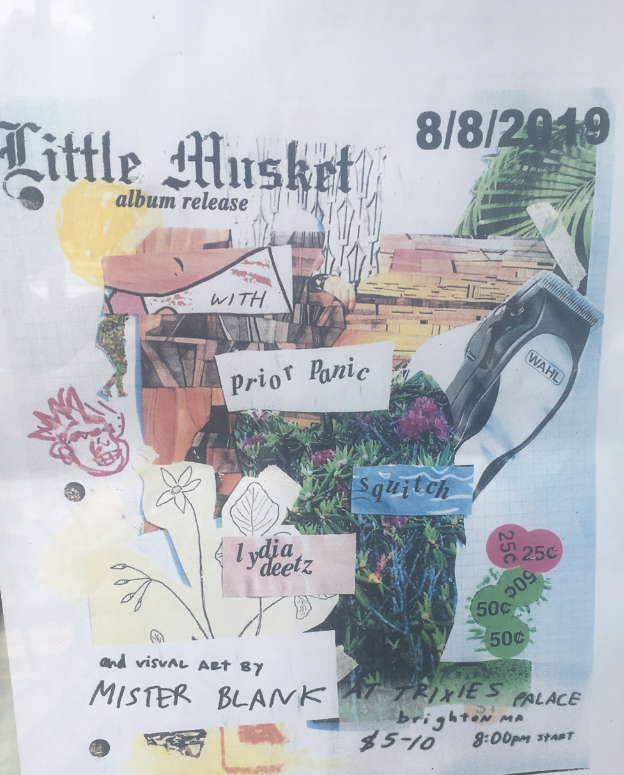 Folks in a house near Ringer Park are having a party.  As we walk by, we start dancing and hollering along to the music.  Someone from the party asks us if we’d like to come join. We debate, then decide what the hell.  Immediately, the host descends upon us.

We decide to leave together.

“I think that guy thought I was a girl from a distance.”

“So that’s why he kicked you out?”

Live local wrestling before the Camp Blood show at Great Scott.  Two enormous bald guys who look like adult babies grapple around on the bare floor.  A crowd of about 25 people hover close by, parting every time one of the babies gets thrown from the makeshift ring.  Three different people yell, “twist his dick off!” Unclear who wins. Everybody?

The Camp Blood guys prowl the stage, stirring up a heavy industrial, PA-destroying fury.  It’s a short show but each track off their new EP gets the kids more and more riled. It’s a nuthouse by the time “HOGWEED” gets going, and that’s just the first song.  Leave feeling like I got kicked in the head, in the best way possible.

Oldhead neighbors smoking joints and sharing boxed wine on the front stoop.  Stop by and shoot the shit. Turns out most of these guys are buskers and sometimes they collaborate and throw impromptu “reunion shows.”  Someone plays the trombone. A guy named Bill runs back inside and comes out with a small metal toolbox, which he fiddles with for the next half hour.

He takes the lid off the toolbox to reveal three hotdogs grilling over a tiny grate.  Smoke rises from the briquettes inside. 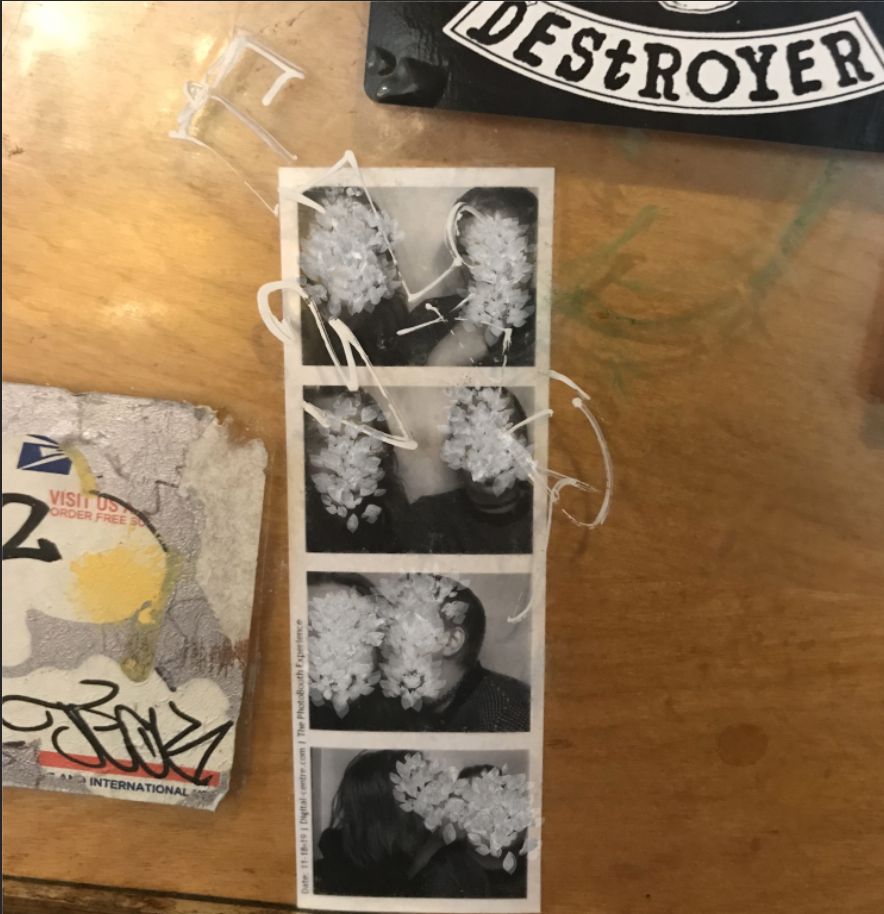 Find a French press on top of a trash can, and a loofah in an abandoned(?) shower caddy on the sidewalk.  The loofah is good–it still has tags. French press could use a wash or two. Two ladies fight over what looks like a wicker model of a ferris wheel.  Truly the most wonderful time of the year. 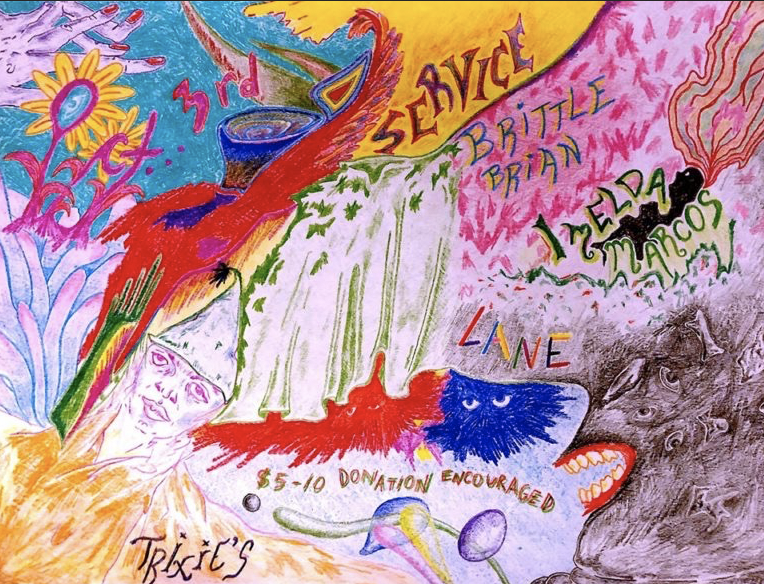 Service again–this time at Trixie’s–with Lane, Imelda Marcos, and Brittle Brian.  Imelda Marcos comes from Chicago and they do these polyrhythmic odysseys of bass and percussion, working in virtuoso overtime.  It’s almost too intricate to follow. Everyone completely loses their shit as the rhythms weave in and out of linearity. Some people tap their feet, others shake their whole bodies, and some just stare in total amazement.  Time is an illusion. Faces are melting. I buy a t-shirt. Chained To The Bottom Of The Ocean, Mountain Man, and Non- at O’Brien’s.  Good, tooth-grinding, brain-melting hardcore, but something’s wrong with the sound during the second set.

“SOMETHING’S WRONG WITH THE SOUND, YEAH?”

Onstage, the lead singer is red-faced and sweaty, straining to be heard.  Suddenly, a single high-hat crash pierces the air, sending a shockwave through the room.  Feels like the Universe turned the volume down. Stay through the show even though ears are ringing louder than the music.  Regain normal hearing in three days.

Allston Diner is still here (for now) but Urban Renewals has closed. 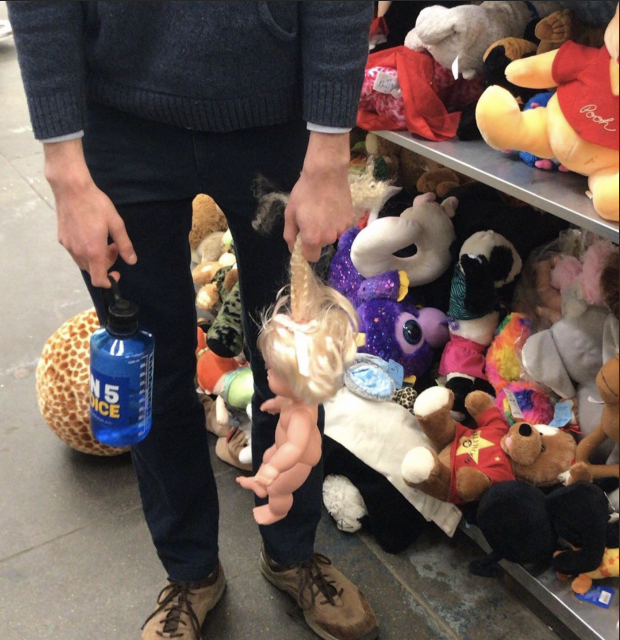 Finally make it to an Allston rave.  It’s vape-themed, but nobody is vaping.  Instead, everybody walks around wearing name-tags adorned with fake vape names.  What is a fake vape name? What distinguishes it from a real vape name?

Downstairs, the DJ churns out trance music for a devoted crew of d&b heads.  Spot an old electric Wurlitzer in the corner. Start hitting keys at random intervals.  Can swear that the music is responding somehow… hit a key, key of the music changes. Hit another key, it changes again.  Mash fingers around the keyboard, everyone goes insane. Someone is behind me.

“Y’know that thing is unplugged, right?”

The line for The Model is too long.  Employing some kind of “the food will come while we’re in the bathroom” logic, convince three strangers to go across the street to my apartment and do shots.  Shots are done. We crash back out onto the street and I tell them I’ll catch up. Vomit in the alley.

The stars are beautiful tonight and rats squeak a Hallelujah chorus. Wander back across the street to The Model.  Bouncer says they’re not letting anyone else in. Strongly suggests I go fuck myself. 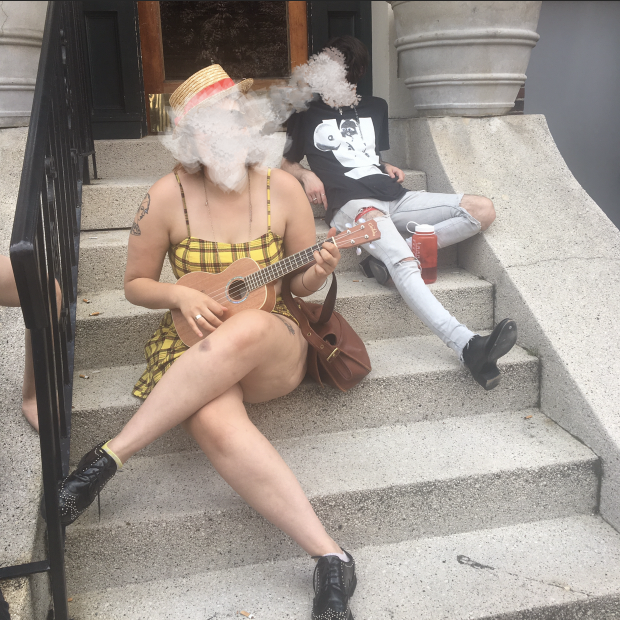