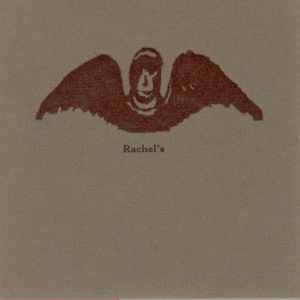 I’ve been retracing the history of post-rock, its richness, and the degrees of heavy experimentation that have occurred, and I’ve found myself on a wild ride. From the New Romantic, to the early ’90s when Rodan’s guitarist began tinkering with tunes for Rachel’s (which was a solo project under the name Rachel’s Halo but was shortened to Rachel’s once they released their debut album Handwriting).

This is one of the most intriguing albums I’ve ever heard and read about. Not only because I have a crush on Rachel Grimes, but also because the album’s instrumentation is fantastic. They aren’t renowned as “the first indie classical band to emerge from the post-rock movement.” for no reason.  It’s difficult to say who was first really, but it doesn’t matter because these musicians’ working in the 1990s were so experimental. Still, Rachel’s excelled at fusing indie and classical music to create something new in the post-rock era. I’m getting off track here, but this post-rock band created something hypnotic. You may argue that Godspeed You! Black Emperor should be included when we mention the merge of rock and classical, but they haven’t formed yet by that time. So, was there a smidgeon of influence? We’ll never know, I suppose.

You’d be astonished too if you put yourself in the mid-’80s to mid-’90s, when people used rock instruments and intertwined elements of diverse music together. I believe post-rock’s main influences were somewhere between classical and jazz, and it’s a beautiful thing to aurally experience.

Rachel’s Handwriting is one-of-a-kind. Everything matters, everything coalesces beautifully. It feels like a deliberate composition where every aspect is studied, be it of life or music. I kind of wish “M. Daguerre” had opened the album, but I think it would have set the tone for this jazz café with orchestral Pink Panther tunes floating through the track. What the record does to you is titillating: it makes you fall in love. Rachel’s gave birth to something totally original, as seen by the melancholy opening “Southbound to Marion”, which offers a different experience: the labour of two worlds of music, the delivery process, the widening of the cervix that encompassed a whole being; moments of pleasure and pain. The transition between the first two tracks is almost startling; the way we’ve gone from grief to flirtatiousness makes my heart skip a beat. Then, we start to see how much effort they’ve taken in building up from nothing to an emotional explosion of harmonic density. The most fascinating aspect of it all, however, is that it wasn’t planned. Rachel’s didn’t even know they were developing something entirely new. It was just the product of musical autonomy; no one was dictating anything to anyone. It just took flight from them all in that direction.

“Full on Night,” in my opinion, was the most beautiful and ambitious track in Handwriting. The way it transforms is breathtaking, almost amphibious in nature, treading on the land of gliding guitars and then plunging into the waters of reality: noises, trains, or possibly another commuting vessel-humanness. Everything about this pours itself into you and you can make of it what you will. I think this is the most beautiful thing about such works: they are like emotional clay only your ears can mould.

It’s incredible what rock and classical music can achieve when given full reign. It’s one of the most beautiful pieces of music I’ve ever heard.