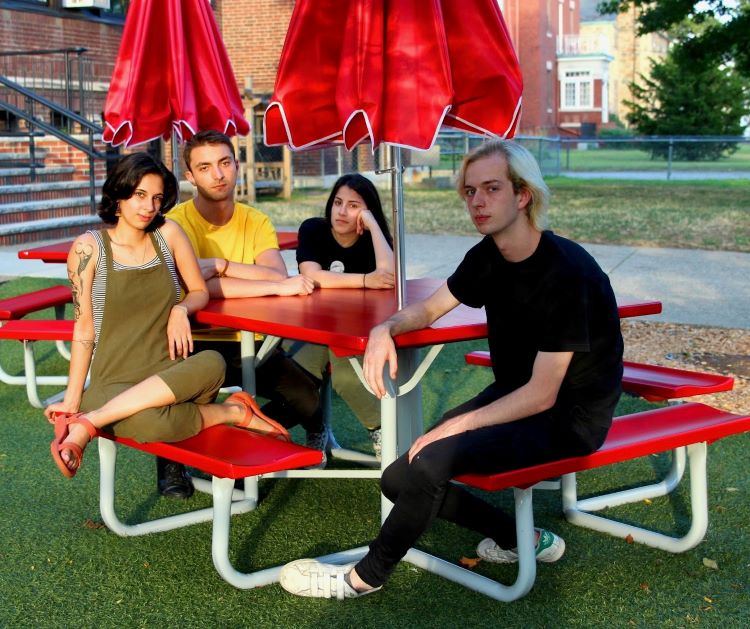 Raavi and the Houseplants debut album, Don’t Hit Me Up, bubbles up from the depths like seafoam. The sound is smooth yet heartfelt; it’s clean, balancing perfectly on the edge of minimalist emo-lounge, never too empty yet never over done. Raavi’s vocals glide on each track, smoothly layered over the stark, highly polished bass lines, accenting the dueling guitars that fill up every inch empty space without clawing for attention. Each piece fits together, tributaries rejoining to flow once more into the sea. The whole record flows like liquid, bass and drums setting a clear path forward– the drums feel especially powerful, setting the tone with crisp beats, never overly punchy, they crunch like fresh snow under warm winter boots. The intertwining guitars embellish this, after all it’s the guitar that provides the driving force of the album, constantly drifting over each other to create dynamic waves of sound and warmth. They slip between each other and provide an interplay of ocean and undertow.

Every instrument fills out the soundscape while never stepping on each others toes, never muddying the track. This alone makes the record feel clean. Polished. Raavi and the Houseplants maintain a full, interesting soundscape without ever overdoing it, there’s not even one second that feels over-cluttered. The tones are smooth, from Raavi’s airtight vocal performance to the immaculate guitar, this record is oozing with polish. It’s cohesive, tight, and a force to be reckoned with, straight out of Boston. An absolute kicker of a debut, I can’t wait to hear what they do next.

I was able to ask Raavi a few questions in anticipation of the release of Don’t Hit Me Up.

Boston Hassle: What’s changed for you and the Houseplants in the few months since we last talked?

Raavi: We had a really amazing two week long tour in August right after “Shoulder” came out. We went down the Northeast, and dipped our toes in the South, we went to Richmond and D.C. and some places like that. It was super validating and reassuring that people were still digging our music outside of Boston! It felt like every show was one-upping the show before it. Since then we’ve been playing a couple shows, but mostly focused on getting this album finished. Sound-wise I’ve been playing around a lot more with open tunings, which are fun.

BH: What has you excited right now? (Beyond just the album release)

R: I’m really excited to get back into arranging new songs. The album has definitely been our priority for the past seven months and we haven’t gotten the chance to arrange the new songs I’ve been working on… Apart from the album, indie music seems to be going in a good direction. The albums that have come out this year have just been so genre-towing and well rounded. The DIY scene as well is having a bit of a revival. The shows are popping right now, it’s insane how quickly house venues have been capping these days. It’s cool to see how people are supporting local music.

R: This record has a much stronger direction than our EP. The main driving force for and i miss you already was to get some tunes out ASAP so we had something to show for ourselves. That was meaningful to some extent, but this album is definitely more of a meaningful project. I’m really proud of the arrangements we’ve come up with for Don’t Hit Me Up as well. It’s also cool that this album is a nice mix of very old songs and some very very new songs. Some of these songs I wrote in highschool, or 2016. The rest of them were specifically written for this project. I’m proud of the old songs of course, but it’s cool to hear these songs recorded for the first time. It feels so good. It’s like the oldest of the old and the newest of the new. Don’t Hit Me Up also has a more specific sound, even though we don’t fall into one genre. We definitely have a sound now.

BH: Talk to me about the recording process- I know when we last talked you mentioned how you and your bandmates had a groove/were all incredibly talented and helped create each song, so how does that translate to recording?

R: We had a super spread out recording process.  Drums and bass were recorded during one fifteen hour session at the studio, guitars were recorded at Josef and Justin’s apartment near downtown Boston, and the majority of the vocals were recorded in my bedroom. This gave us a lot of freedom because everyone could really take their time and focus on their own part. Recording vocal takes was definitely the most time consuming, and the most rewarding for me personally. Having the freedom to take our time with it and try out new things was really helpful.

BH: Is there something you’re trying to get to with this album? What does it mean to you?

R: It’s kind of weird to even think about having a full length record out. It’s something I’ve always wanted, and it’s validating to know that I have so much support behind me, from friends, family, and even strangers. I’m still wrapping my head around the fact that there are people who go to our shows just because they like our music. Some people reach out to tell me how much tracks like “Nora” or “Shoulder” mean to them, and I just hope that continues.

BH: What are you looking forward to after the release of this album?

R: There are some things that I wish I could talk about but I’m probably not supposed to. Uhhh the Spring is like, a better time for gigs I think. I want to book a lot of college shows and travel around a bit in the Spring. We want to be playing out of state more in general, as much as we love Boston.

BH: Is there anything you want to talk about that I didn’t ask here?

R: I definitely wanna thank all our friends for supporting us over the past two years. Not just Ruben, Justin and Zach for making this album sound pretty, but without our close friends coming out and supporting us time and time again, I don’t know how we would’ve gotten the confidence to put this album out. There are a lot of amazing people constantly reminding me that this is worth something and I don’t know what I’d do without them.

Raavi & the Houseplants’ debut LP Don’t Hit Me Up is out now, streaming above. Join them in celebrating their record release at ONCE Somerville tonight at 7PM with MAYA LUCIA,  Gapteeth, and DJ set by VHS SLUT 1997.