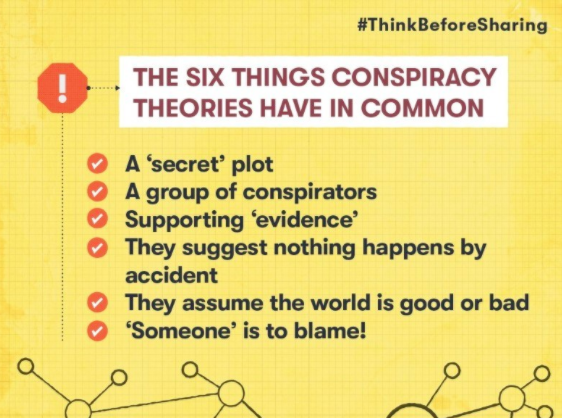 Last night, a family member emailed me a link and told me to ‘watch and listen’. The link was a piece of Q|ANON conspiracy claiming that, in essence, the Rothschild family fixed the elections so that Trump couldn’t save America.

There is a lot more to what I was sent but first, I just want to clarify some things. I am not sharing the link in this text. And second, as a Jew, this issue hits close to home for me so I take great pleasure in unpacking this paranoid conspiracy theory.

First, here are some quotes that stuck out to me from the article and continue to make me laugh.

“… The Trump presidency is a de facto military presidency that was established… to bring down the globalist Rothschild-London-central banking enterprise that completely controls every country on the planet.”

(and the very next sentence)

“Since the assassination of JFK… every US President, with the exception of Ronald Reagan(!!!!) has been a “Deep state criminal.” (exclamation marks mine)

“…The NSA… also did one thing: it put every single one of these bad guys, all these criminals in government, In DC, Big Tech, multinational corporations, military industrial complex, the monarchies around the world, the Vatican….”

“The purpose for selling him [Putin] that uranium was, they skimmed the uranium off the top of that stockpile. If you ever seen the movie ‘The Sum of All Fears’ with Ben Affleck and Morgan Freeman, you’ll understand this.”

Now, aside from some basic copy-editing let us see where some of these arguments tend to go awry. I threw in the last three quotes to demonstrate just how absurd the article actually is. But it is important to note, once you buy into the first quote, the Rothschild theory of world control, a lot of these other arguments tend to go down easy. This is the scary part which is why this anti-semitic conspiracy theory has been so popular for the last two hundred years.

For folks who do not know, Q|ANON is a theory that Donald Trump is going to save the planet from an evil cannibalistic, pedophiliac cabal of democrats and other ‘deep state’ cretins. These deep state cretins are including but not limited to, The Vatican, The London Central Bank, the CIA, the list goes on. All of these institutions are controlled by the Rothschild family (who are Jewish) for the aims of global control and destruction. These folks believe that, essentially, over the course of 200 years, the United States has been bought out and taken over by the British Central Bank which is controlled by the Rothschild family. Trump has been sent by god (I’m guessing) to magically save the planet and in doing so turn the US into a fascist military dictatorship.

Now the part about the Democratic Party being an ‘evil cannibalistic, pedophiliac cabal’– I’d buy that, I wouldn’t base my personality around it, but I wouldn’t dismiss it out of hand either.

However, problem number one: you expect the guy who told everyone to inject bleach into themselves to stop the virus to bring down the entirety of the Deep State and prevent the CIA from destroying the planet? Wishful thinking to say the least. Two, to say that The Vatican is involved in this ‘cabal’ is a severe over-estimation of The Vatican’s capabilities. Have you ever been to Vatican City? You can see all of it at once, their soldiers are dressed like theater kids, and folks there are far more concerned over not allowing tourists to take pictures of Michelangelo’s Sistine Chapel than they are about pretty much anything else.

Three, if at this point you are still fixated on the Rothschild’s, believe that there are many other shadowy corporations and families that actually do control massive segments of the US and global economy. Take for example, the Koch Brothers (not jewish) progenitors of ALEC, famed actual earth destroyers, and major Republican donors.

Or take perhaps, The Sinclair Broadcast Group (Julian Sinclair Smith is also not Jewish). The Sinclair group controls massive swaths of US media (294 stations in 89 markets) and infamously planned to run (then pulled amid criticism) “The Plandemic” on all of their channels a few months previous that blamed the COVID pandemic on Bill Gates (another non-semitic monopolistic billionaire) and the WHO. And then there is Rupert Murdoch, the non-jewish anti-semitic owner of Fox Corp and News Corp and I don’t even need links to prove how toxic Murdoch’s chokehold is on the American imagination.

‘BuT wHaT aBoUt MaRk ZucKeRbErG?!?!’

I’ll grant you that he is Jewish. But, really, the person who has allowed alt-right, Q|Anon, anti-semitic, anti-science misinformation to flourish and thrive on his platform? That guy? I hold him largely accountable for allowing this theory to flourish for so long.

The top 3 wealthiest Americans in 2018 according to Forbes, are not even remotely Jewish, and those folks are Jeff Bezos (who uses slave labor), Bill Gates, and Warren Buffet of Berkshire Hathaway.

My point is that the global economy and the modern world are so utterly dispersed (Baudrillard cites this as one of the foremost features of post-modern society) that one entity controlling the world is so utterly unrealistic and naive.

So by using thinly-veiled antisemitic tropes and dogwhistles, whoever the creators of Q|ANON are, these folks have remade the face of antisemitism into something more palatable and mainstream worthy, hence the theories stronghold on the American popular imagination.

Q|ANON is just repackaged, repurposed antisemitism for the modern era loaded with dog-whistles and unproven assumptions. Perhaps, if you haven’t guessed by now that Q|ANON is at best a distraction to have the public focus on a crack-pot conspiracy theory, opposed to the actual people who are destroying the planet and global democracy such as the Koch brothers and Rupert Murdoch (to name just a few).

Perhaps you fancy yourself a ‘Rothschild truther’ and you may say ‘yeah they don’t control the world, but they did once, they bankrolled Hitler.’ I am not so sure what the Rothschild involvement in WWII was. But you know who did actually bankroll Hitler? Standard Oil subsidiaries, initially owned by famous oil baron, non-Semite John Rockefeller. Or, look no further than the hood of your car. Henry Ford (and other American auto-manufacturers of the time) reportedly collaborated with the Nazi regime (despite their best efforts to hide this fact.)

Before you want to blame the Rothschild’s or THE JEWS! or THE CABAL! try on for size some perfectly fact-based criticism of blue-blooded Americans (or Australians or South Africans) who are actually destroying the world and are actually bigots. There is no denying that.

This Week In Experimental: Volume 55

Hello Experimenters!   What a truly strange time to be alive. I’m admittedly distracted today by the attacks on Palestinians and Colombians,…