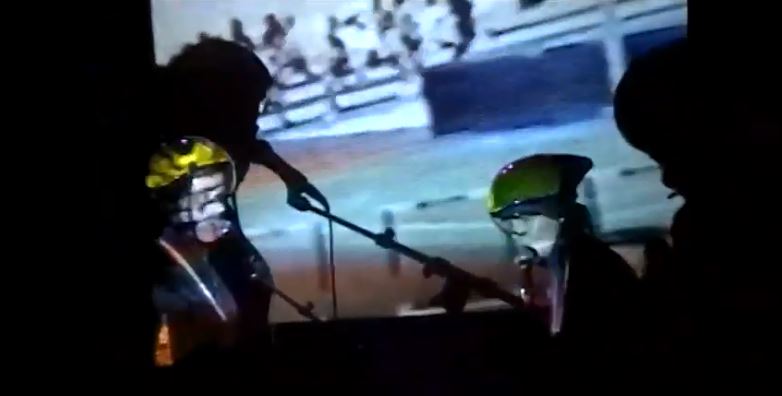 still from the video of UV Protection live @ Great Scott

Ben Sisto was a powerhouse experimental and underground showbooker and event organizer in the Boston music scene and community in the early and mid-2000s. These video archives that he is gifting to the world are some of the proof of that. I was lucky enough to get to go to many of these shows and to collaborate and be inspired by Ben and others during this time. An interesting artist, and a curious individual, be on the look out for the movie they made about his curious pursuits!? – DS

Dan Shea: So… there are these 100 miniDV tapes?

DS: I haven’t found myself among the moving pictures yet, but it’s only a matter of time. I’ll keep watching. I don’t remember you always having a video camera in your hands back then. Were you purposely, constantly, attempting to chronicle what you were doing (and I just don’t remember)?? Knowing you I assume so. If so, did you have an end goal in mind for the footage at the time?

BS: Maybe I saw you in the crowd at a USAISAMONSTER show? Even if you can’t find yourself in the clip, I’d wager you’re there.

My time at Mass Art was focused on conceptual art and time-based media, both of which rely heavily on documentation as a form of both truth-telling and myth making. We learned about Chris Burden being shot in the arm, Abramović and Ulay’s Rest Energy, those sorts. They are actions but really, it’s the tape that lives on. Like how many people were really there watching Beuys talk to a dead rabbit in 1965? 20? But thousands saw the photos.

Punk and indie scenes are even more into artifacts and nostalgia—old flyers, 7” test pressings, original shirts, etc—and that was a big influence on me. In a lot of ways a box of old music-scene ephemera and a Fluxus box are the same thing. Anyhow, growing up a relative owned a record store and we’d buy bootleg Nirvana and Pearl Jam CDs from him; it’s where I first heard songs like Sonic Reducer. I loved bootlegs; they always had liner notes that were stories about that night. That show. So when I got the chance to make my own tapes, it just seemed like something I should be doing.

DS: These videos are like a drawn curtain being pulled back open both in my own history, and that of the Boston rock underground. Thank you for this. What do you see, hear and feel as you let these videos and past times wash over you?

BS: They make me think about what’s there, and what’s missing. Boston felt very segregated, by musical sub-genres and by racism, homophobia, classism, sexism, etc. There’s mostly white dudes in these tapes; mostly from suburban middle-class backgrounds. Back then I would have argued this was a function of Boston’s … being Boston. In reality, as part of Boston I could have done a better job building bridges, doing more direct action and community organizing. There are also whole scenes missing —I never organized a Converge show, when I see the Refuseniks tape I wish I’d done more w/ that punk scene. When I look at the archive on Return to the Pit or the East Coast Punk Archives on instagram I feel like despite my best efforts, what I did up in Boston was insular. What can ya do? Limited time.

On a positive note, I also see a super wide range of artists, most of whom I also remember being good, kind people. Tunnel of Love, American Nightmare, USAISAMONSTER, Jason Lescalleet, Squids, Helms, There Were Wires, Night Rally —these were some really fun shows that crossed over with dance nights like Start!, The Pill and my own, Dynasty. You’d see a kid who was just stage diving at a Bane show dancing to Ladytron on Lansdowne Street. I also remember getting a lot of support from local papers, venues, bands and friends. There was a whole summer where I essentially didn’t pay for lunch because I had a flyer-route that took me past all the bagel and burrito shops where folks in bands worked. Maybe that’s my favorite Boston memory; walking alone but like, with the city, for hours and hours putting up posters.

DS: So the 143 videos uploaded so far represent only HALF of the content (50 or so of the tapes) from your archive?! What’s going on with the rest of the tapes?

BS: I just had the second half picked up to get digitized by some professionals, and in about a month they’re going to give me back 56 hour-long video files to watch, chop up, add fade-ins and outs and upload. There’s also a kind of fun but tedious process of playing “Who’s this band?” because not all the tapes are labeled and I have to wait for the bassist to go “This next song’s called Blah Blah Blah” and Google that title, the approximate year, find some photos and match them to the people on the tape. It takes a while but its pretty fun.

DS: What kind of suggestions can you make to folks who might not be familiar with this era of Boston music, or this era of music in general? Where to start with these videos? How does one begin to digest this experience?

BS: This is really hard to narrow down so I just did a fast-pass and picked these 10 (below):

>> Note from Dan! Each of these tapes cost Ben $20 to have converted and about 2.5 hours to watch, edit,  process and upload. If you are at all interested in helping to donate toward this project which is costing thousands of dollars and which Ben is wholly funding himself,you can venmo him here: @bensisto <<