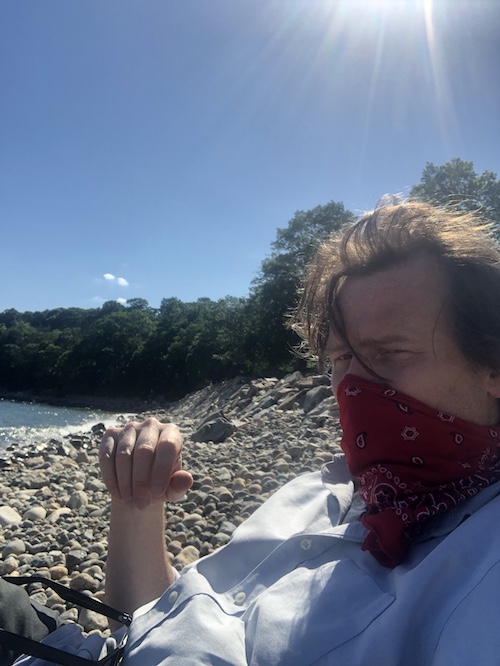 According to the great Louis Jordan, “You don’t have to pay the usual admission/ If you’re a cook, or a waiter, or a good musician.” But that’s only at the Saturday Night Fish Fry. On Tuesday mornings during the pandemic, everybody still has to pay for everything. Restaurants will be limping along through the summer after a few crowbars to the knees as if fallen behind in payments to the linen supply and trash removal services of the universe, and if restaurants will stay open or face more closures in a few months is hard to call.

Maybe people will be too scared to go to downtown. Look what happened to the Uggs store on Newbury Street. The whole look of potential customers on the street looks less than promising. So often one half of a couple has a facemask on. It’s like watching Aladdin on Ice at the Garden, these young should-be lovers going around Somerville. Looking at these sad sacks, it seems like nobody can get their attitudes in sync, except at a righteous demonstration. This is where poetry also sometimes comes in.

Like a lot of writers and poets who had new books come out in late winter and early spring, I had to cancel readings for my new book Barbarian Seasons throughout March and April and into the summer. It was okay. As a writer, I’m basically a non-profit in it for freedom, and my other vocation, teaching, pays the bills. The main thing for me as things slowed down was that I was lucky to have my classes, my students, things to do every day, and of course my paychecks from the various schools where I work. Any former waiter appreciates the regular arrival of paychecks.

Around the end of March, I got a message from Steph Durwin, a musician and songwriter who had taken creative writing with me and gone onto a life as a solo artist, producer and trans musical activist and helping promote the work of other musicians as well. Suddenly unemployed, Steph decided to create a streaming series of morning concerts to raise a few bucks for musicians through Venmo, and she thought I could use a slot to raise some money with my book. Musicians who want to gig online, look Steph Durwin up.

But instead of passing the virtual hat around for my poetry, I decided to dedicate my reading to Restaurant Strong, a group of statewide funds set up by Sam Adams and the Greg Hill Foundation to provide grants to full-time restaurant employees who are suddenly not making it. I hope that they are also doing a fund—or that somebody is—for all of the people who work under the counter, some of them probably fearing ICE, at a lot of places.

I think it’s appropriate that a poet would read for people who work in the food business. We are near of kin in our mentality. I worked in restaurants until I was almost thirty. More oddballs, more meritocracy and diversity and exploitation, more feeling, more chanciness, more wit, more realism, more enduring toughness with attendant sensitivity, more wayward imagination, more solidarity of every kind in kitchens and front-of-the-house crews than in poetry. Poets, don’t have a boozer competition with the restaurant business, or get a ringer or two. But we likewise, most of us, have front row seats to late capitalism/service/gig economies and longtime knowledge of the chow chain, the socially Darwinist one with everybody on it.

We sleep late and work into the night, or we wake up very early and prep the kitchen. We’re there for the celebration, and we’re there for the dates and the necessary conversations, and we’re there after a lot of funerals, too, and even Christmas parties, with public teachers acting wild, you name it. Sometimes, we get up early and work late, too. Except for becoming more metaphorical and less literal, the move from one pursuit to another was not that big a deal.

We like to make things and to move around rather than to follow a pattern, or we love the formality and the process and theater of it all. The arts and the restaurant business alike have a lot of uncertainty and instability in good times, and they have the habit of taking everything a person has, and so a lot of people move on. The stubborn remain. “Lie la lie, lie la la lie lie lie” (Paul Simon).

When the English Metaphysical poet George Herbert imagines God throws a dinner party with himself on the menu in the seventeenth century, or when Walt Whitman imagines himself as “a cosmos, one of the roughs,” as somebody who wants you to “relish well” some steak, then we are on the trail of how poets think like restaurant people. “Come on to my house,” Rosemary Clooney sings. “Everybody easts when they come to my house,” Cab Calloway responds. Saucy? You bet.

When the great haiku poet Bashō says to eat vegetable step instead of duck stew, he is strictly back of the house and knows all about the shift meal. William Carlos Williams, who was also a doctor, claimed that without poetry he “would have died/ or been a thief,” but he was wrong. He probably would have ended up working restaurants, one way or another, maybe as a daemonic banquet manager with an electric silver suit and fine merino sweaters. The Zen poet Han Shan always pals around with the great Zen dishwasher, Shih Te, on the outskirts of the monastic institution. Let’s face it: monks are a drag. You see these two grinning by the dumpster at closing time, getting into some stuff, liminal, but doing what?

Who knows? In the fall, if the education business doesn’t come back, we might be needing Restaurant Strong to start an Contingent Academic Labor Strong fund. And if you go out for socially distant tapas, make sure to tip at least twenty per cent because waiters like poets have their weird mojo, though poets won’t put something in your soup. You have to spend yourself and your money in life. And as for the bartenders, don’t forget the wood.

David Blair is the author of four books of poetry and a collection of essays. His latest book ‘Barbarian Seasons’ was published in February by MadHat Press. He teaches expository writing at Bentley University and Framingham State University, and he also teaches in the online masters degree program in creative writing at Southern New Hampshire University.

Letter to Harper’s Magazine Re: “On Justice and Open Debate”

Barring prohibitive discussions about art, I see ‘art’ as a protest or resistance against ‘something’. Personally, I make art to enter into…