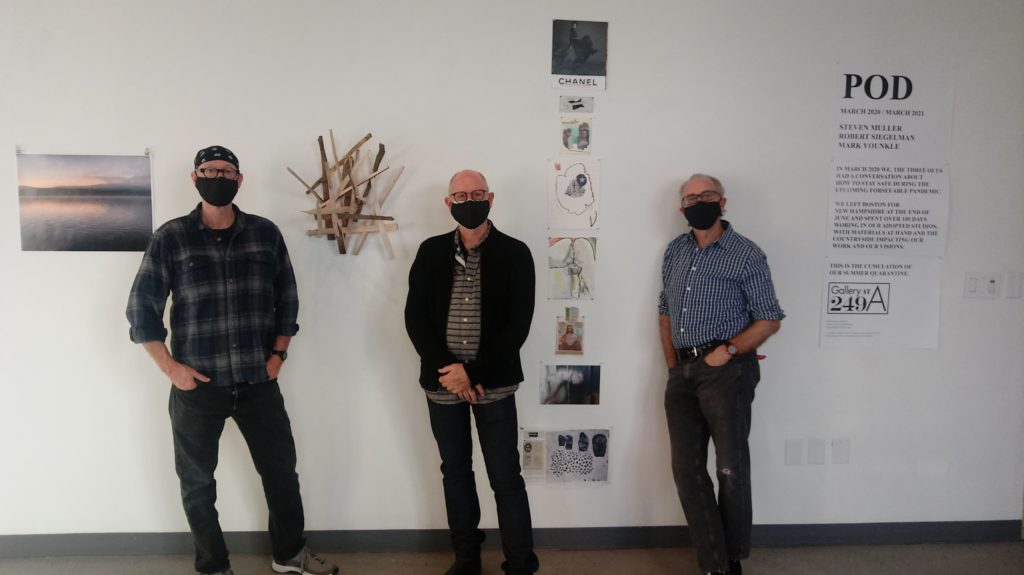 A trio since I met them over 10 years ago, and long before that, veteran Boston artists Steven Muller, Robert Siegelman, and Mark Younkle have a new show up in the gallery at 249 A Street in Fort Point that conceptualizes the social- distancing and safety precautions most of us have grown accustomed to over the last year. “Pod” is a selection of work the three artists made while quarantining together in New Hampshire in 2020. It was at the end of June, when the “reopened economy” was recklessly in full swing, that the three artists decided a retreat to rural New Hampshire would be a safer bet than staying in the city. For 100 days, the three men lived and worked in their safety pod, seeing only one another, influenced by their rural surroundings and each other, using only materials at hand. 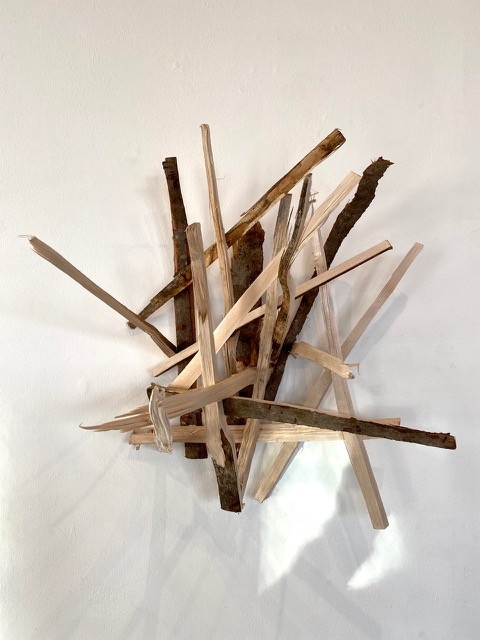 This experience led to some entirely new directions as well deeper inspections of familiar themes. I had the pleasure of meeting up with Steven, Robert, and Mark at the gallery to talk with them about the work in the show. The exhibit’s cohesiveness is striking. The eye moves along the walls, following an open-ended, abstract narrative that ends up being a visual representation of these men’s relationship. Gay and queer chosen families are gaining more public visibility and acceptance, so that the show would push the concept into a Covid-19 context is timely, especially since all the customary ways of connecting with one another safely are being reconsidered. What a perfect time to ponder the idea of the pod, which would have seemed silly little more than a year ago. 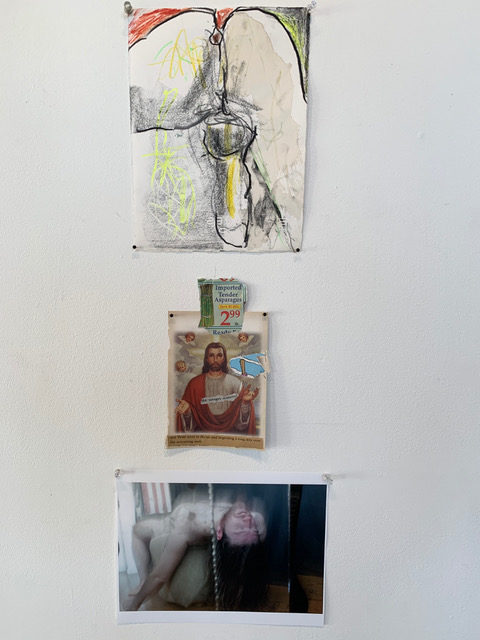 Steven Muller, who curated the exhibit, is primarily known for his hand-manipulated photographic prints. Using source imagery that ranges from the mundane to the homoerotic, Muller scratches, chemically treats, and layers grids of Scotch Tape onto large digital prints. His work in “Pod” represents a total departure from his usual practice, and a complete embrace of the rural environment where he spent quarantine. Using a chisel to split firewood up into thin strips, Muller then pieced the wood together to create sculptural works he considers line drawings, most of which are wall pieces. While the works initially resist being labeled as drawings, as they stick out in all directions and aren’t imprinted on any surface other than the wall they’re mounted on, what he means becomes obvious after staring at them for a while. Split pieces of wood intersect one another, their shadows on the wall creating more lines, enabling the viewer to feel the gestures of the marks as they move with you around the space, shifting shadows like sun dials. 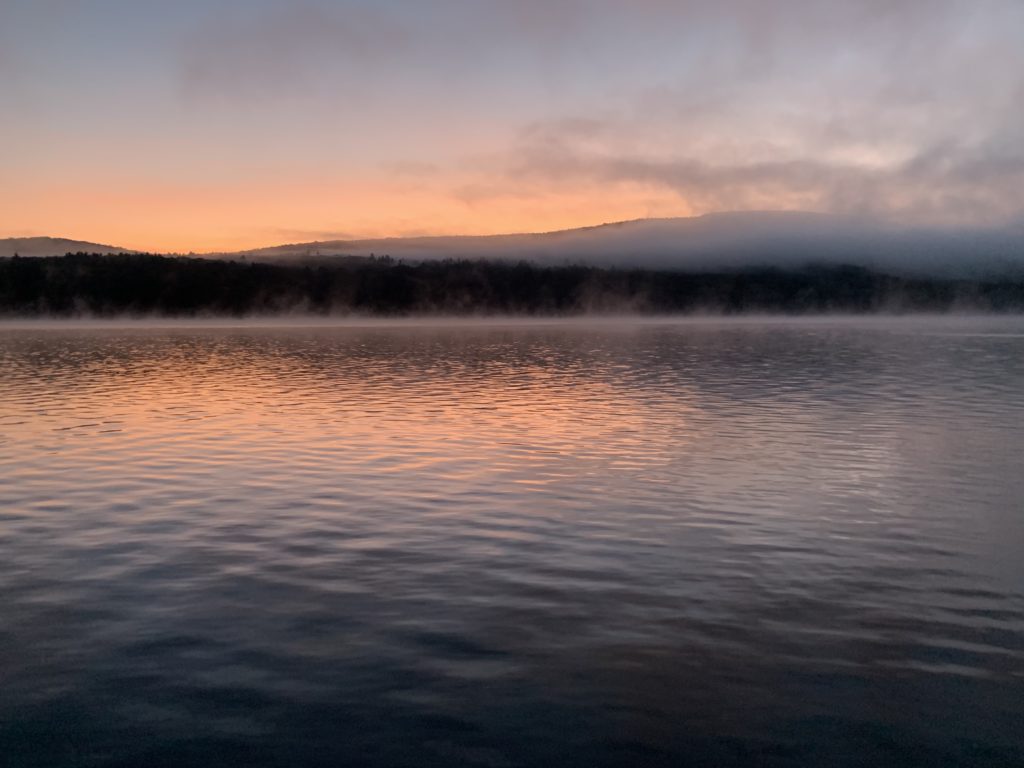 Robert Siegelman, a multimedia artist working in drawing, collage, installation, and photography, makes all sorts of standalone pieces that could, at any moment, be incorporated into something larger. A collage displayed all by itself on a wall in a corner one day could be a tiny detail in a huge installation the next. A practice Siegelman has developed over the last few years which is specific to the time he spends in New Hampshire is creating installations in found spaces, like the middle of the woods or in an abandoned building. A lucky hiker might be on a nature walk and suddenly come across several rows of trees covered in weathered photos, book pages, and various ephemera. In “Pod” there are no trees(not whole ones, anyhow) in the gallery, but the form is hinted at by Siegelman’s vertical arrangements. Colorful pastel figure drawings, erotic photographs, collages, and hybrids of the three make their way up from the gallery floor to create installations that are something like 9 feet high. The way they tower above Muller’s deconstructed tree pieces and Mark Younkle’s lake photographs solidifies the loose narrative of three gay men quarantining in the New Hampshire woods. 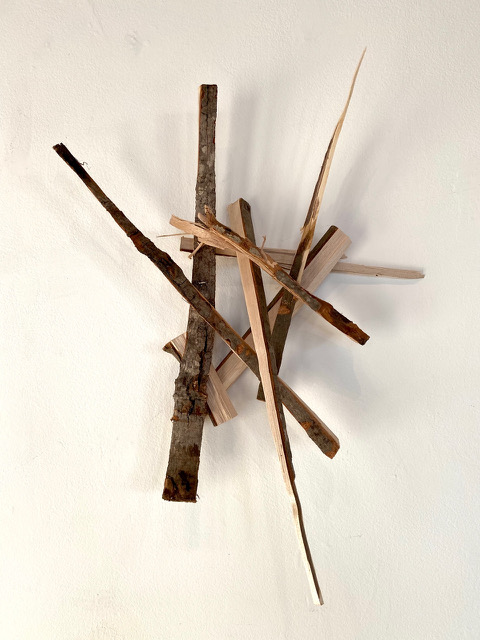 The exhibit itself becomes a sort of staging of the idyllic location the artists shared. The trees are experiments, deconstructions and reconstructions. The passage of time is enacted by the light on the lake and the clarity of the sky. Each day of quarantine, Mark Younkle would go for a long swim right before the sun rose. Before every swim, he’d take a photo of the lake from the same spot. The prints selected for the show range from still water beneath a crystalline sky, to ripples reflecting purple clouds, to a brownish orange hue caused by wild fires in California. Just a few of the lake’s many personalities are on display, beckoning the viewer to wonder about the other 95 or so days and how they impressed themselves upon it. 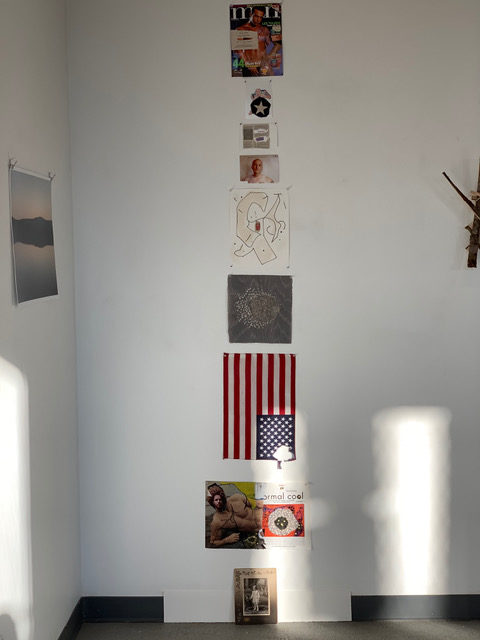 Younkle is a dynamic artist who is as comfortable making photo-realistic graphite drawings as he is making bright, abstract modernist collages. The photos in “Pod” aren’t a departure for Younkle, but a new project in a series of projects depicting bodies of water. In his studio are several framed arrangements of small Polaroids depicting water and sky horizon lines across the middle of the frames. Purples and blues hint at non-representational color field paintings. Younkle’s relationship with the water, which he immerses himself in and steps away from, seems like a cathartic dive into nature’s indifferent embrace. 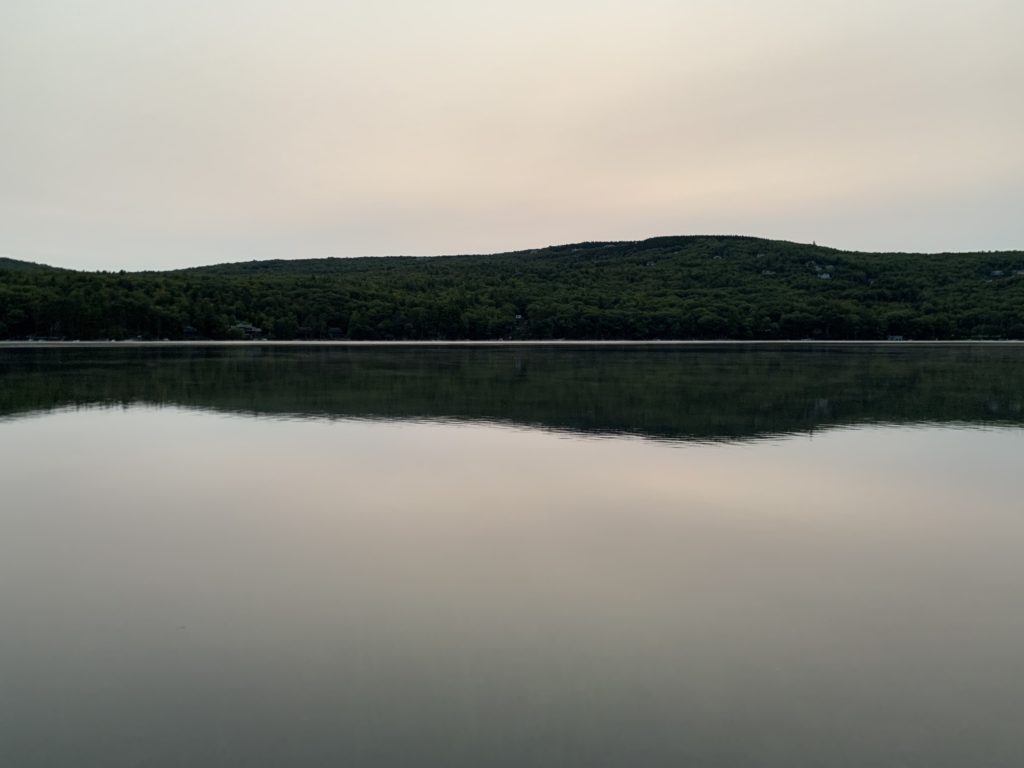 Steven Muller and Robert Siegelman have been working in the Fort Point area long before it was named “The Innovation District” by our late Mayor Mumbles, for whom art was apparently not innovative enough. Mark Younkle has kept a studio in the SoWa district of the South End for the better part of two decades. Boston has a reputation for being a city artists pass through, spend time in, and eventually leave. Those who actually stay are underrepresented by local institutions. But there are plenty of artists making interesting work who have been here for years, and I’m glad to have been able to write about 3 of them and what they’ve been able to turn their Coronavirus experience into. Check out “Pod” at 249 A Street, on view until April 22nd. 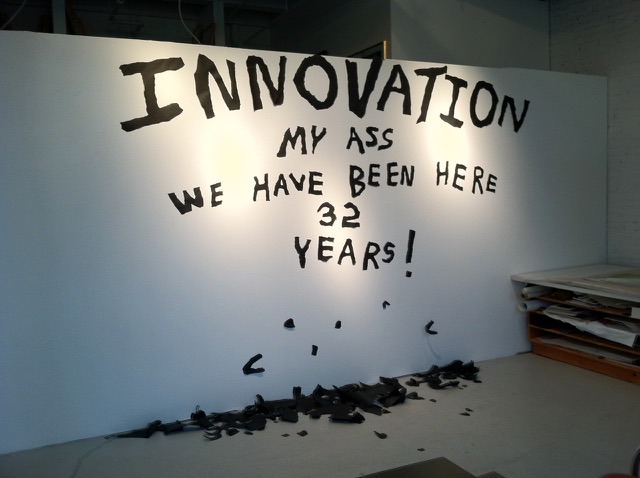 for more info on the show and the artists, follow these links: