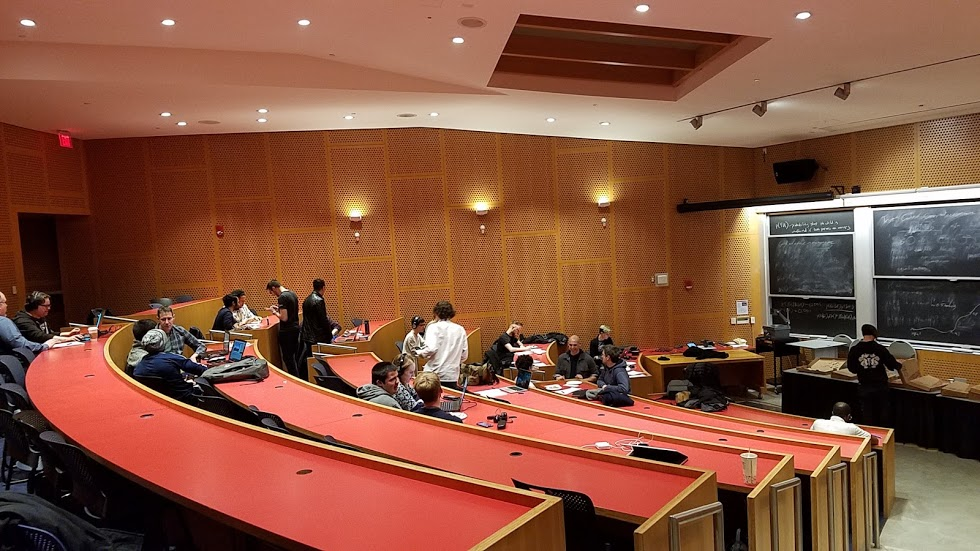 “If you have games to demo, raise your hand!” Caroline Murphy throws up her arms with a smile, and hands go up around the room. It’s a snowy Monday night and we’re here in an MIT lecture hall for Boston Indies, a monthly meetup where independent game makers come to chit chat and share their creations. The format of the event rotates every 3 months, and tonight is demo night, where attendees bring their experiments and in-progress games rather than sitting back and listening to talks. When I arrived Caroline handed me a set of puzzles she’s testing for an upcoming game. “Just imagine you have morse code and semaphore charts over here,” she taps to the left of the puzzle, assuming I’m familiar with semaphore’s flag-based alphabet for ship-to-ship communication. I look up a pair of charts and kick my evening off by sorting potion bottles and encoding dots and dashes.

The official start to the night comes with announcements at 7, with community members lining up at the front of the classroom to call out local jobs and events. First up is Seth Alter, one of the three co-organizers of Boston Indies (alongside Caroline, who’s running things tonight). He’s currently doing some contract work for MIT and his team is hiring a 3D artist. He’s been working with MIT and Boston Indies for a few years now, but Seth is best known for his games like Neocolonialism (2014), where you play as a wealthy banker manipulating international policy to fatten your wallet, and Hexadecimate (2018), a cooperative card game where players take the role of millenial witches defending themselves against an occult alt-right.

Mitchel from Game Audio Boston is up next, inviting us to come out to their meeting next week. In most cities game audio would be a pretty niche community but our proximity to Berklee College of Music’s game audio programs, and Harmonix Music Systems (creators of Rock Band) makes for a lively scene. GAB is one of the newest meetups in town, but it’s also one of the most active. “Maybe you need some audio for your game?” Mitchel shrugs, “We exist!”

The penultimate announcement is quite a reveal: it turns out Boston Indies is celebrating its 10th birthday. And doing so with a characteristically laid back event…so laid back, that virtually no one has realized the date. Most people find out when Eitan, a long-time attendee who runs Firehose Games in Inman Square, shouts out the anniversary announcement from the crowd. “We should call up [Boston Indies founder] Scott!” he jokes, as the cheering subsides. “I totally have his number. He’ll be so confused if we call him.”

The first official meeting of Boston Indies was in a bar on February 18, 2009, with Scott and just two others in attendance. In the decade since, it’s gone through a half dozen organizers and almost as many venues, but the cozy, community vibe it’s had since I started attending in 2011 hasn’t wavered. Though, changes like the move to MIT (meaning it can no longer be BYOB), overall growth of the game industry, and the many meetups that have popped up in years since have undoubtedly had an effect. “The community feels a little less spunky than it used to, but that was as much of the members and the times of their lives as it was a reflection on the landscape of game development.” says the third co-organizer, Michael Carriere (who runs small Cambridge-based studio Zapdot as well as our local coworking space, the Indie Game Collective). “Indie Development was nowhere near as mainstream (relatively) a decade ago compared to where it is today. The difficulty bar continues to drop precipitously daily, which make the ‘average’ attendee a different type of person, and as such: the event itself changes how it feels.”

Despite a lack of resources (BI is free to attend, and has no cash reserves) the organizers have made some intentional course adjustments to differentiate from other events and give Indies a more distinct identity. “Over the past few years, we’ve put a lot of effort in bringing a diverse group of voices in for lectures to inspire and educate the community.” says Michael. “Our lectures focus on history, diversity, accessibility, anthropology, and design that may not be an immediate correlation to digital development, but absolutely has a place in shaping and informing our projects.”

As announcements wrap up, Caroline suddenly remembers one more thing.

“I have a carnival coming up! A dark carnival!” she beams. 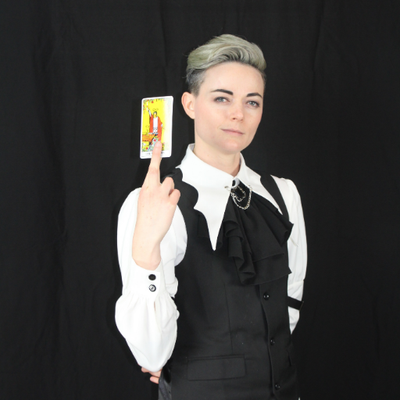 Caroline’s not kidding, she really does have a carnival coming up: the Carnevale di Oscurità, an immersive theater production put on by her company Incantrix Productions runs March 7th at the Oberon in Harvard Square. The show reflects Caroline’s range of interests and skills, mixing live music, burlesque, stage magic, and, of course, puzzling into a Tarot themed “night of intrigue, mystery, and exploration that invites audiences to revel in the darkness.” But what most interests her about making games is the experience of physically putting people in a room together. “The kinds of games I design that I’m the most proud of are the games that really call people’s own understanding of themselves into question. You have to take a hard look at yourself,” she nods, “I think the medium I’m using is the best possible medium for that. Having that live, in-person, looking people in the eye experience is powerful, in a way that I haven’t found in any other gaming medium. And I’ve designed for ’em all.”

Caroline also runs a less dark carnival in the fall: the Boston Festival of Indie Games, a huge annual showcase of video and board games that’s now in its 8th year. The fest is what she’s most known for in the game development scene here, though she doesn’t want it to overshadow her work making games. “At Indies people are like, ‘Oh, Caroline, she’s a community organizer.’ Nah dude, I’m actually a fucking really good game designer.” Design talents aside, you can’t deny BFIG’s success: the show has now outgrown its previous venue, and is moving to the Harvard athletic center in 2019. The organization has also started running a developer-focused conference (FIG Talks) and Caroline’s currently developing a program to teach game development skills in underserved communities. “I want everyone to be able to tell their stories, and I don’t think that happens unintentionally.” 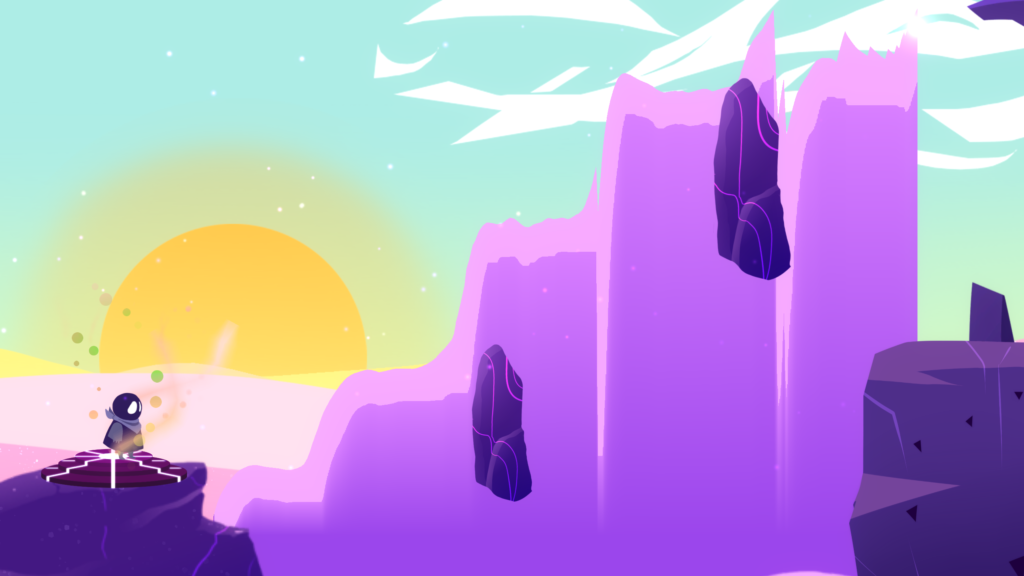 A sonic landscape in ‘One Hand Clapping’

Announcements over, I return to checking out games. It takes almost an hour to notice the singing. It’s not immediately obvious over the chatter, but it’s present throughout the evening, starting deep, ascending an octave, and falling. I make the connection when I glance down and spot a light on a laptop screen, rising with the singers pitch, drawing a wave form across the monitor. A purple blob with wet eyes hops up onto the wave drawn by the singer, walks up the now-solid waveform, and progresses by running off the screen to the right, “Sing, hum, or whistle to affect the world” is the tagline for the extremely cool One Hand Clapping, a game about using your voice to solve puzzles and traverse obstacles. The member of its University of Southern California based team who’s showing the game tonight just moved here, and this is his first time attending. “I moved for love,” he says when I ask him what brings him to Boston.

As the night rolls on, I take some time to play a computer generated slot machine and an augmented reality version of poker, where I toss digital cards at a table projected into a camera feed of the room. I catch up with old friends, offer career advice to a newcomer looking for her path into making games, and ramble about the virtues of virtual fishing in World of Warcraft to anyone who’ll listen. It is, aside from the abnormally lavish pizza (Bertuccis; a gift from Firehose Games. Eitan claims it’s a coincidence, unrelated to the anniversary) a pretty typical evening of playing weird games with the crew of game creators who call Boston home. Interested in making games? Come hang out. We exist.

Boston Indies meets on the third Monday of every month at MIT.

Funds, Resources and Information for Artists and Art Communities

COVID-19 Relief for Everybody in the Art Community

An Abridged History of Renters’ Movements in Boston