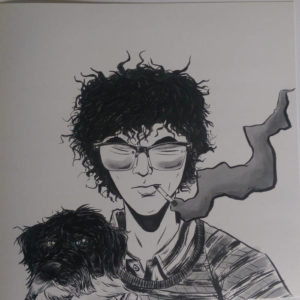 It was a kindly port. A place of cool breezes
and dense sails. Bustling with life. I obser-
ve strange enchanted scents curling over mos-
s covered stones that wind up ancient paths
of black soil. Orange trees bearing their b-
ulbous fruits sway in currents of air.

I sit reading a book. It depicts scenes of a
similarly entwined fabric full of obscure ma-
gic. Tones of lightly burning lamps casting
distilled shadows onto burning stucco leave-
s folded in time. I have a purpose in this p-
lace but presently I am resolved to an into-
xicated, blazing, fortune.

A crone walks up a hill carrying a basket. A
young lady accompanies her. The girl stops a-
nd stares into the sea at orangey reflective
sails. She crouches to pluck and flower from
the earth and eats it. Laughing she addresss-
es the old woman with indiscernable tones wh-
ich echo against the walls of an alley way s-
tretching off into obscurity.

A sound projects from the port. Many voices
clamoring with metallic bursts and thundero-
us might. Birds caw and wing through air. A
great iron whistle sets off in brazen atona-
l churns. An explosion. Fire streams from a
hidden ground accosting azure skies. It’s b-
lack smoke chokes the scene of vitality and
soon I hear the screaming.

A group of black clad men rush past me curs-
ing in alien words. One looks me in the eye-
s, scowls, and continues up the path. He tr-
ips on a rock and falls. When he looks back
to see the damned thing we reconnect eyes. H-
e spits, standing, and rejoins the blasphem-
ous parade escaping into the horizon.

The people on the streets disappear though,
like phantoms, I can feel their eyes looki-
ng out from occult recesses at the calamity.

A child with a black bag over her head and
an automatic rifle hisses to my left. I lo-
ok over and I’m greeted by the gun’s barrel
pointed to my forehead. A phrase pours fr-
om the child’s mouth. I hear a deafening n-
oise and I am consumed by darkness.

Set out on an adventure against a fuzzy space rock collage with Phenomena 256 on Bandcamp.