SELF TITLED DEMO by PERMANENT DISFIGUREMENT 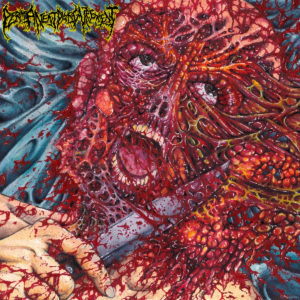 “I have better things to do than patch
your lame, rinky-dink, Windows server.
I was hired to find the mole in this o-
rganization and you’re really starting
to piss me off with your bullshit, pet-
ty, hassles!”

“What?!?” The disgruntled man yells.”L-
isten, I’ll call you back. Some FUCKIN-
G PEASANT is talking to me.” He glares
at the woman, taking the cell phone fr-
om his disgusting, oily and pox-ridden,
face. He puts the phone to his chest.

The woman takes a step back. “Uh… Co-
uld you keep it down… You’re frighte-
nning the children.” She points behind
him at the family standing in line at
the drug store. About 7 other custome-
rs are standing still, looking at him.

The man is infuriated. “Oh… The POOR
children. It’s always the children wit-
h you people!” At this point the secur-
ity guard has appeared beside him.

“Sir…” The security guard deadpans,
his hand resting on a pepper spray ho-
lster. He tilts his head to one side
and raises an eyebrow.

“Don’t sir me, you fucking monkey.” The
disgruntled man steps into his face. Th-
e guard takes out his can pepper spray
and unloads its contents onto man’s face.
He screams. The children cry. The younge-
st one begins to scream. Our madman fall-
s to his knees, and screams. The girl’s
father screams, too, “You dumb shit! You
got it in her eyes!”

The last thing I saw was the man writhi-
ng on the floor as the guard dragged hi-
m out of the pharmacy. “You’ll lose you-
r job for this, you fuck!” The guard pl-
aces the substantial blob of a man aga-
inst the wall outside and kicks him mer-
cilessly with his steel-toed black leat-
her boots in his now bloodied face.

I watch the scene through the windshield
of my hearse as I take a few dozen bottl-
es of 5HTP, multivitamins, and Congizen –
the entire stock – from my sleeves and p-
ant legs stacking them beside the coffin
of someone’s dead grandmother.

“The perfect crime,” I think as I pull o-
ut of the parking lot. A number of cruis-
ers arrive and I hear a great deal of ye-
lling through mindbending sirens. I crac-
k open a bottle of contraband kombucha. I-
t explodes in my face from all the jostli-
ng and I jerk the wheel violently. Oncomi-
ng traffic barrels at me and I bounce off
an abuttment. The hearse spins madly into
space as I reflect on the inevitability o-
f my own wacky death. The last thing I se-
e is the embalmed grandmother’s deathly s-
mile as she slips out of the passenger’s
side window.

I swear to god I saw her wink.

You can download Permanent Disfigurement’s vicious and violent demo on Bandcamp.