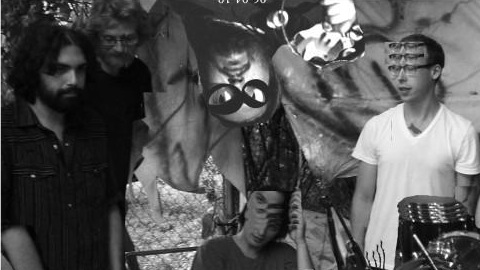 When folks asked me who I planned to see at this year’s Hassle Fest, my mind – surprisingly – did not gravitate towards the acclaimed giants who were to grace the stage (or, I suppose, stages) of the Brighton Music Hall that weekend. No, the one band I had decided was far-and-away the freshest shrimp to see this year was the Brooklyn-based noise rock outfit PC WORSHIP.

Don’t get me wrong, I spent as much time on my college radio station spinning Flipper and Scratch Acid as the next kid (which is to say the DJ after my show quite literally played both sides of “Generic” every week). But beyond giving legendary headliners their dues, Hassle Fest is also about sharing such a legacy with local favorites and New England bands deemed “up-and-coming”. I last saw PC Worship perform (or something to that effect) when they were on tour with Thurston Moore and Parquet Courts last October. Actually they played as a motley supergroup with Parquet Courts because certain members from both bands could not make the show…thus breeding an ephemeral beast of sludgy bedlam, known as PCPC.

Seeing PC Worship perform and hearing them live are two completely disparate experiences, and in fact, I found myself unable to do both at the same time. The majesty of one trumps the majesty of the other, and as I stood in Out of the Blue on the first night of Hassle Fest I dithered between the two – without distraction – indulging my less refined senses with a cacophonous symphony of minimalist noise rock and synthesized free jazz improvisation. While PC Worship is primarily the solo project of New York eclectic Justin Frye, it has developed into a greatly admired collective of Bushwick weirdos, generally performing as a quartet out of that chic DIY space known as “The Wallet”. Their fourth full-length record Social Rust (released on Andrew Savage’s own label, Dull Tools) displayed considerable kinship with the most disturbing Butthole Surfer records and even my copy of White Light/White Heat after my cat scratched the f**k out of it. They recently put out a new EP called Basement Hysteria which adheres more strongly to their sludgier sensibilities than say “Baby In The Bedroom”, the sole acoustic track off of Social Rust (though it sounds more in line with Beck’s Mellow Gold days), which plays to the height of their conventionality.

Following the silky conduction of Shannon Sigley’s hair flips as she beats furiously into her drum kit, the group (most of whom are part of another Brooklyn band, The Dreebs) followed a loosely structured medley of material written by Frye, who seemingly embraces improvisation and spontaneous gestures of musical expression within each performance. Most of the set was comprised of Basement Hysteria tracks, at least one of which made good use of the band’s homely looking one-stringed device dubbed – I believe – “the shitar”. Michael Etten switched between bass guitar and saxophone periodically though both hung off his shoulders at the ready, and Adam Markiewicz bowed frantically at his violin, which bled out of the amplifier assertively. And though the latter was subdued by the clamorous bass tones of the guitars, the meandering screeches of the instrument still cut through.

Within this synchronized expression of a maddening tumult, there was no groove. There was no dancing. There was only the gradual sway of the crowd to an inconspicuous and ill-defined sense of rhythm and the nauseating realization of knowing it would soon be over.

If you missed them at Hassle Fest 7, you can hear and buy the band’s digital material on their bandcamp or at Dull Tools.