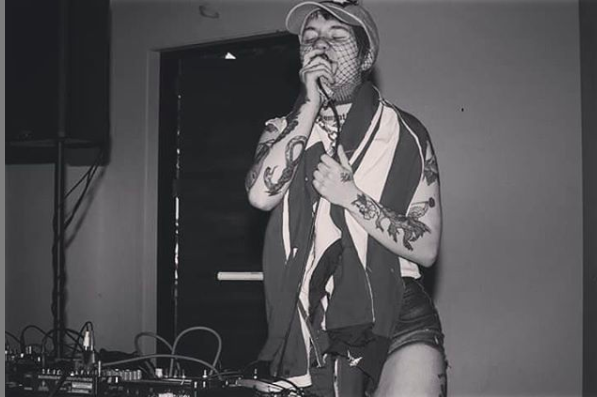 When I think of summer, I think of powerful, all-encompassing noise music. Well not always, but with Pain Chain’s new June AND July releases the tradition has been cemented in me that summer time is now the time for noise. Following the hard-to-top releases of some dangerously strong works like “Stained Aura” and C.U.M.’s “Ethical Consumption”, “Nightmare Silhouettes” opens with the sound and feeling of every horror movie ever made beginning all at once. The song carries on with equal power; not leaning on distortion and effects or on instrumental talent alone to complete the track. Instead, creating that perfect blend of signature input that makes Pain Chain a staple of the Greater Boston noise scene.

Pain Chain’s bandcamp page states: “Words cannot express the true chaos of the mind.” Their discography instead utilizes immense soundscapes to give a portrait of our inner selves. “It is all that I am through sound”, says Pain Chain in an Instagram DM interview about the relationship between art and identity. “Nightmare Silhouettes” is unnerving, but there is that undeniable truth in its ominous style.

I have always been a high believer that the instruments in music should be creating the emotions themselves, not just supporting the vocals. Anybody practicing this style in their own work should listen to the fluid way this song does just that, pulling more than only sound out of the giant black void of possibilities that noise and experimental musicians work within. The noises that are yanked out of this pit are powerful. Just as the song’s beginning starts to grow, I’m hit with the force of a bit-crushed, beat up synth that feels like something that was once a piano, but has been hammered in and stretched out until it is a whole new terrifying machine with a smoking habit. The song as a whole is sick, one of my favorites, but I won’t ever be able to forget that one sound.

“..but when I discovered noise I realized that I didn’t have to know an instrument. I could make anything I wanted into one.” – Pain Chain

And their discography is covered with detailed and individual sounds and effects that sets their music apart from the general noise crowd. It is good to see that the energy in their music has not changed. I was able to catch one of Pain Chain’s shows at Dorchester Art Project a little over a year ago and that intense feeling of discomfort and need to question hit me then and still translates into the recent summer releases.

Instead of standing on the stage for their show, they placed a table with their gear in front of it (you have no idea how much I love that power move) and began to screech into a microphone while surrounded by a scape of harsh crunches and groans that came from the synths and pedals that covered the table. Draped over the table was an American Flag, the words “Jeb Bush signed the death warrant for Aileen Wournos who was on death row for killing 8 men who raped/hurt her.” written prophetically onto it. You cannot hide from that.

If it was not obvious, a lot of their work is politically charged. Cutting up an American flag live with full ’90’s Manson passion and wearing a large chain with a “bloody” coat hanger attached to the other end as a reminder of Gerri Santoro and victims like her are part of Pain Chain’s impactful performance resume. Scrolling through their Facebook and Instagram will also immediately inform you how they fuse music and activism together. Pain Chain is a large advocate for prison abolition, utilizing their follower count to post about ending prison slave labor. Their beliefs are addressed in a powerful and upfront manner (i.e. songs like “Abortion On Demand (I’m Not Ashamed)”) that leave no room for confusion and no room to ignore. The relationship between art and activism is strong in both their live performance and online presence, and are both delivered with immense passion.

Nothing in their act is merely for shock value. Pain Chain explained that after some shows, the torn up reminents of the flag would be handed out to the audience. The pieces with written messages on them, “so they could take it with them and process it, think about what it means to them.” Along with creating a statement, their live performances become immersive and involve those who experience them. 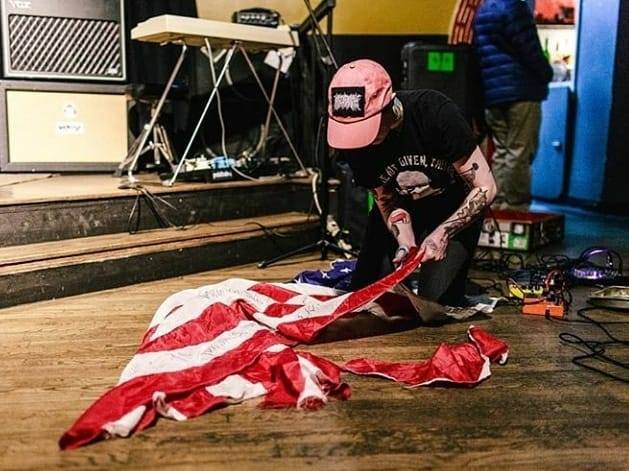 “Art is a form of rebellion. I absolutely think the two are connected and always will be for me.” – Pain Chain. The more I reflect on this quote the more I am reminded of Marcuse’s writing on art. Whether intentional or unnoticed, Pain Chain’s views of a growing and evolving society have roots in centuries of upset people.

Their art and activism entwines again in their dedication to queer rights/protection and the obliteration of gender norms. They even title themselves an “Androgynous Life Force.” This title stands true during their shows as well as their powerful recordings. It is a rare thing today to find a performance that uses strong messages, hard noise, and heavy performances to design an open-minded and inviting scene for people to feel welcome to attend.

And when Pain Chain performs, another thing you can count on is the merch. Along with some quality tracks, the tape came with some interesting and unique art work. In a way that would make even Baudrillard proud, the collage creations that surround this work come to life and give off the same energy as the music it is physically wrapped around. This is entirely my opinion, but the merch, collage, and music itself give off the same vibe as what early punk in the 60’s and 70’s did before the audiences began to dress the same as the performers and adopted words like “punk-rock”. An energy that is entirely personal and self-created.

Pain Chain also runs Mutual Aid Records together with Chuck Steak. Artists like Burnt Feathers, Scrape Tenshi and Visibilities are all supported on this label. Their bandcamp is a hub for new forms of music and a perfect place to find some more noise performers.

Check out the dates listed below for some Pain Chain performances. The shows are inclusive, open-minded, and foster an audience of inclusion.