TJ Edson is the sainted madman behind the booking @ Central Square’s amazing OUT OF THE BLUE TOO GALLERY. Here’s some words he gave us about 2015.

Last night I fell asleep in my computer chair in the dead of the night as I typed away a litany of emails dealing with booking requests for Out of the Blue Too Art Gallery & More.  I was hoping as the gallery’s manager to plug in some more music shows and events into the few remaining January dates. It’s something that, at the beginning of 2015, I had zero experience with.  This, amongst many other responsibilities of managing a cooperative art gallery, event space, and performance venue, quickly became a regular thing for me this past year, though.  It is all very surreal how it has played out.  To think it was precisely a year ago that we hosted our first music show for our Grand Opening simply blows my mind.

2015 was a giant year for Out of the Blue Art Gallery. By the end of 2014, we had planted new roots on Mass Ave across the street from the Middle East and rebranded it Out of the Blue Too Art Gallery & More.  To state the obvious, the location can’t be beat.  We all hoped we could take the philosophies that the owner and founder, Tom Tipton, had established at the Prospect Street location to all sorts of new levels.  For years, Out of the Blue hung the artwork of local artists and hosted events of all kinds in a very funky, intimate, and sort of magical place.  Now, there is 6,000 square feet to play around with.  Twelve of the old galleries could fit into Out of the Blue Too!  We have played with so many fun ways to hang artwork and represent artists of all types within the new space.

We opened the doors in October of 2014, but the city of Cambridge was adamant that the gallery be legitimately licensed before hosting any sort of events.  It wasn’t until January that we finally managed to acquire an entertainment license from the city and began hosting music again.  But instead of being limited to acoustic music and quiet electric sets, like at the former location around the corner, the new gallery could now handle any type of music.

It all began with a quiet roar amidst the barely punctuated onslaught of snowstorms. Remember last January and February?  The frigid misery of “Snowmageddon” really crippled the beginning arc of Out of the Blue Too’s initial push as a music venue.  Many of the bills for shows at the onset were being pulled together on our end without the time, energy and resources to promote beyond Facebook event pages and hindered by the endless snow.

Let me flash back to the the first Black Market in October of 2014, which was held 9 days after Out of the Blue Too opened up for business for the first time.  Out of the Blue Too had a table at the Black Market and I met Sam Potrykus and Dan Shea of the Boston Hassle.  They were aware of the new space that Out of the Blue Too was in and looking for a host for one of the Hassle Fest 6 extension parties.  We all tried to figure out a way how we could host it at the gallery, which hadn’t gotten its entertainment license yet.  It didn’t end up happening, but when the snow melted away in April, the gallery hosted its first Boston Hassle event with music by Muddy Wires, Fake Sick, Jacob and Jimmy, Audrey Harrer, and O. Jelly.  It was a beautiful night of avant-garde noise and composition. More importantly, this began to open the gates up for other promoters besides the Boston Hassle to be interested in booking at Out of the Blue Too. 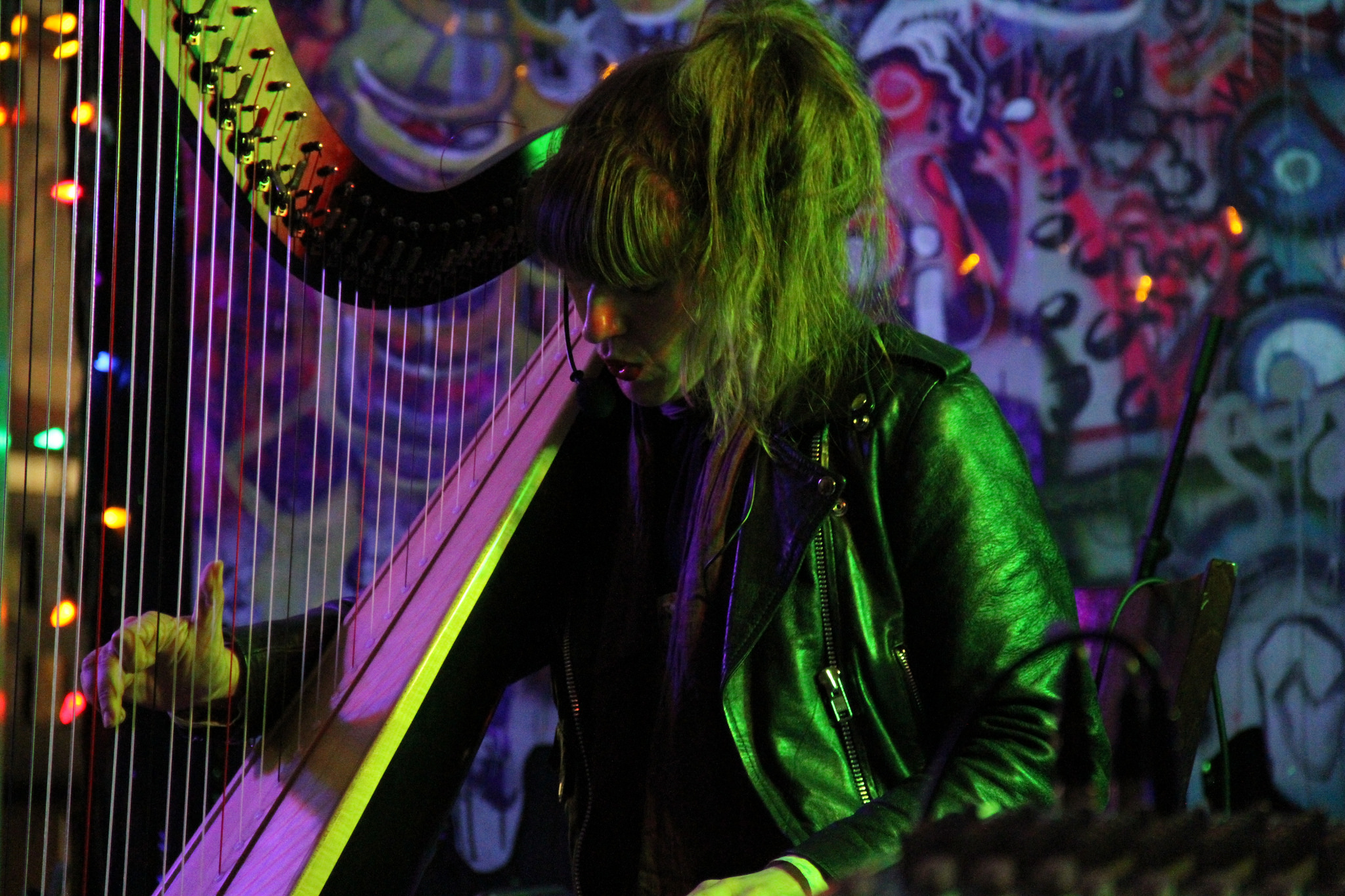 Audrey Harrer performing at Out of the Blue Too, Photography by Sarah Silbiger 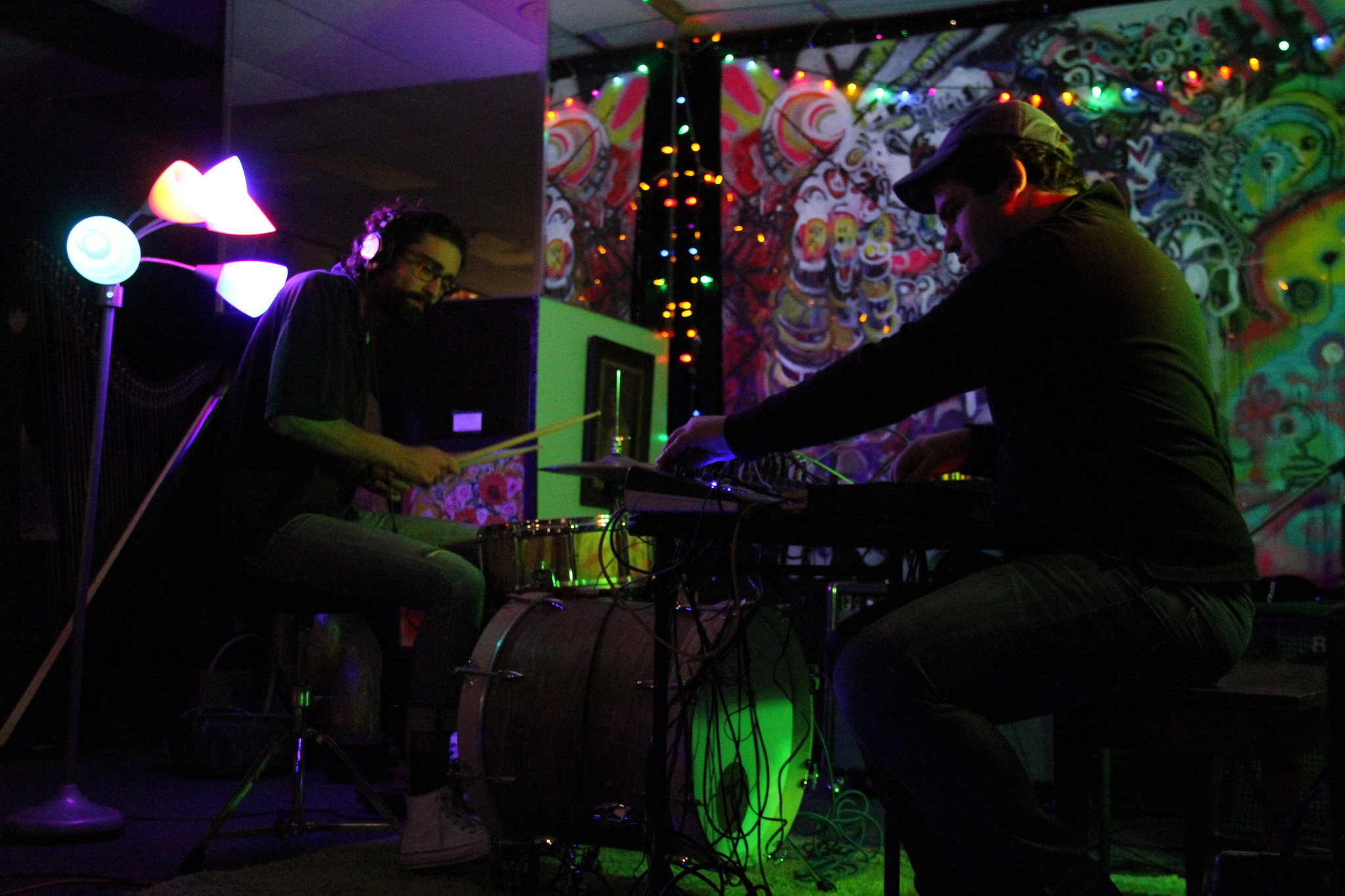 Jacob and Jimmy performing at Out of the Blue Too, Photography by Sarah Silbiger

With help from huge shows like the Pile show presented by Boston Hassle in May, by the time June rolled around, the gallery was booked for music pretty much every single night.  It seems like it can still keep growing the more and more people discover the gallery on a day to day basis.

September was an exciting month for the gallery.  We hosted our first music festival, dubbed Out of the Blue Back to School Fest that featured 11 bands.  I put the lineup together with my friend Travis Long of the band Jarva Land.  There was an additional stage setup for back to back sets through the whole night.  Wicked Mess Fest presented by Boston Hassle a few weeks later was another highlight for us.  The Festival was a marathon of 17 bands, again on two stages.  We also ran a successful Kickstarter campaign in September to raise money to fund the process of becoming a non-profit organization.

Beware the Dangers of a Ghost Scorpion! at Wicked Mess Fest

After so many successful shows, it feels like an evolution to be considered a venue for small festivals that help define our music scene locally and beyond.  These festivals help us host favorite local, national and sometimes international performers all in the same night or weekend.  It’s really an honor to be providing the community with this resource.  In late November, Out of the Blue Too hosted another festival presented by Show Mom Collective, Show Mom Fest II, which included out of town bands like Palm, Banned Books, Beth Israel and a bunch of awesome local talent. Stay tuned for more festivals to come.

It’s absolutely overwhelming to think about the amount of amazing music I have seen working the shows at Out of the Blue Too this past year and how much amazing artwork has come through the doors.  The growth I have experienced in the gallery over the course of a year convinces me that we need more places like it.  It doesn’t seem like it should be in the location it is in, but luckily for all of us, it is.  We need to embrace the beauty of there being a space like Out of the Blue Too in the middle of Central Square on Mass Ave.  It is something quite special and life-altering for me to be in and experience the space on a daily basis.

There is a lot of warmth and positivity from the community at large about Out of the Blue Too. People really dig the atmosphere, the eclectic art, its comfortable setup, amazing acoustics, and the wide range of music it has been hosting.  Just this December, we have completed applying for non-profit status and are awaiting Federal approval.  This will help keep this dream alive.  People need a place like this.  I know, as a crazy artist, I do.  I am going to keep fighting for it.

Coalescing the Chaos Continuum that is 2020