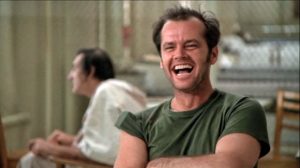 “Jesus, I mean, you guys do nothing but complain about how you can’t stand it in this place here, and then you haven’t got the guts just to walk out? What do you think you are for Christ’s sake, crazy or something?” Jack Nicholson’s McMurphy shouts pleadingly at the men during group therapy. He is met with wide eyes and mouths agape. McMurphy shakes his head. “Well, you’re not! You’re not! You’re no crazier than the average asshole out walking around on the streets!”

Miloš Forman’s One Flew Over the Cuckoo’s Nest (based on the equally brilliant novel by Ken Kesey) spins the story of Randle Patrick “R.P.” McMurphy, a biting, smug, but charming criminal who—after repeat offenses—is committed to a mental hospital in Oregon. McMurphy is not mentally ill, but pretends to be in order to avoid labor and the discomfort of the gritty prison life. He believes staying at a psychiatric institution will be a calming experience and much better than prison.

He soon finds out that he may have underestimated what it’s truly like to be there, and what it means to be committed.

Upon arriving at the hospital, McMurphy instantly becomes enemies with Mildred Ratched, the infuriating nurse (no, really, I get angry writing this when I think about her) who runs the ward and uses cruel, manipulative tactics in order to keep each patient fearful of her so that she can control them. The men are so henpecked and beaten down from her tactics that it baffles McMurphy: their cigarettes are controlled, their TV privileges are controlled, and they are not allowed to speak out when they think something is unfair. All of the men, to McMurphy’s shock, are there of their own free will.

Among the men are Chief Bromden (a tall, silent Native American man), Billy Bibbit (a young twenty-something with a controlling mother who is friends with Ratched, an anxiety disorder, and a stutter), and others. McMurphy, with his outgoing nature and lively personality, shortly becomes well-liked by the men and becomes the ringleader in the ward, pushing them to do more than they think they can do. He wants them to believe in themselves, and have confidence: speak up to Ratched when bullied, talk to women, go outside (one of the best scenes is when McMurphy steals the entire ward and a bus and takes the men fishing), and understand that there’s a whole world out there for them and they mean something to it. 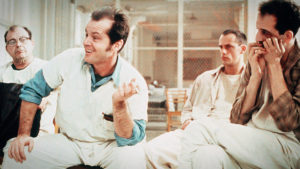 His encouragement, confident attitude, and belief in the men (who have seemingly never been believed in their entire lives) create a positive outcome when they begin stepping outside their comfort zone. Billy loses his stutter and gets the confidence to get with a girl. Chief Bromden speaks and smiles. The other men begin to stand up for themselves when they’re being pushed around by hospital staff.

Ratched, who sees McMurphy’s encouragement as a threat to take away her power, begins to fight against him as she feels her control slipping through her fingertips. Tensions begin to rise, and Ratched begins to try to take McMurphy down, whether it be through passive-aggressive comments and subtle threats during group therapy, or electroshock treatments to try and beat McMurphy into submission. Try as she may, Ratched’s barbaric punishments fail. McMurphy holds true, brighter than ever, and continues to stand up for himself and his friends in the ward, urging them to understand that they aren’t crazy, they deserve a good, normal life, and need to go out and catch it before it’s gone.

One Flew Over The Cuckoo’s Nest is considered one of the greatest films of all time—and for good reason. The film won five Academy Awards, including Best Picture. The cast is brilliant, consisting of Jack Nicholson and Louise Fletcher (who both won Academy Awards for their performances). It also features Brad Dourif, Christopher Lloyd, and Danny DeVito, all in top form as McMurphy’s fellow inpatients at Oregon State Hospital. You empathize with these men, grow attached to them, and—like McMurphy—you want to see them leave the depressing, manipulative environment of Oregon State Hospital, and succeed.

The progression of McMurphy’s realization that these men are normal and deserve better than what they’ve got is the heart of the film. His character arc, from first being uncaring and thinking that a stay in an institution is a joke, to understanding and empathizing with his fellow patients, is a raw, touching sequence in film. During one of the group therapy sessions, when McMurphy calls them all out on how they’re not any crazier than “some asshole on the streets,” is one of my favorite moments in movie history. McMurphy’s aggressive nature, paired with his softness and empathy for the men, is what makes him one of my all-time favorite film characters. He’s likable, he’s funny, and he cares. He changes, for the better, and through that, is able to change the men that surround him at the hospital—making them feel happy, included, and believed in, if just for a little while.