Curbside, it is quiet. Traffic rolls by, but it is still early and the cars are few and far between. Discarded I await life’s next offering to me, its next prodding in the right direction (any direction really). I wait, moist. It rained last night. In the distance I can hear hear a rumbling. Whether or not it is a return of the thunder that accompanied last night’s rain I am unsure, at first. Soon though I realize it is something else. The sound I hear is the sound of cleansing approaching. The sound of the machinery of man put to the task of eradicating the likes of me from its neighborhood. I await the end. The rumbling grows nearer. Louder. There are delays as smaller machines are carried away by yet more machines so that this heaving, cleansing monstrosity can make its way to my slice of curb and get rid of me for good. As the hulking beast sets upon me all is calm. My eyes closed, I await oblivion.

I am thrown into the air. Chemicals sprayed upon me, I settle back into the curb. The beast roars away. I am no longer simply trash, discarded, I am now a street sweeper resilient material. 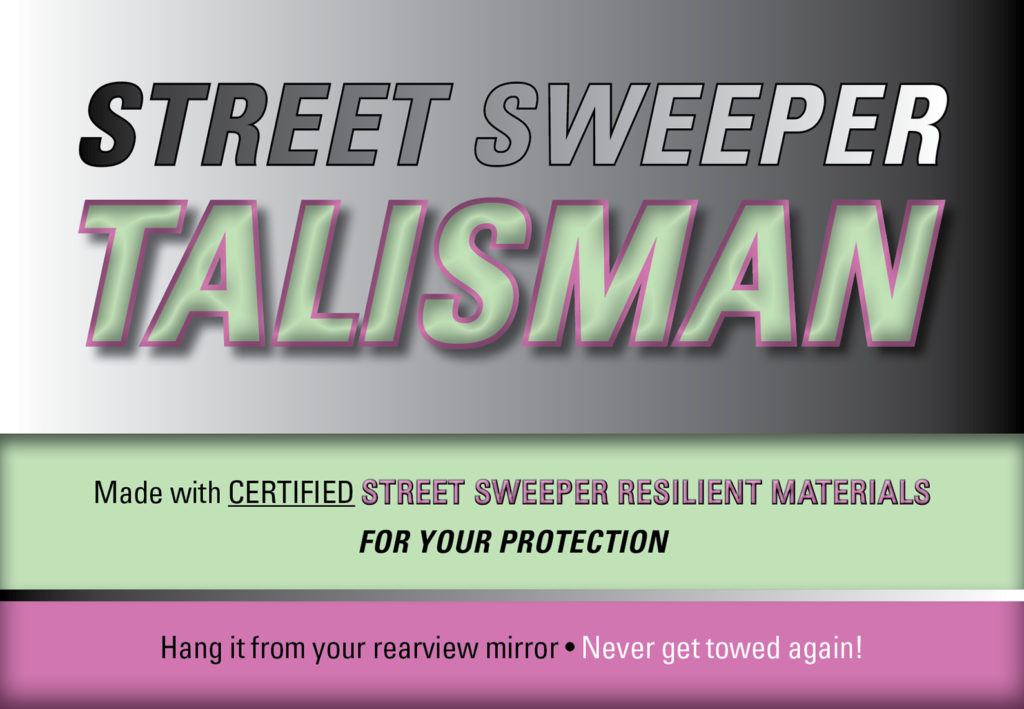 JP based artist/musician/malcontent Neil Horsky has a strange brain. The kind of brain that comes up with an idea like this:

making TALISMANS (as art)/ ART (as talismans) out of street sweeper resilient materials to NOT ONLY shine a light on what a bad job street sweepers do, BUT ALSO to serve as a force of good in reminding all of us sad sacks to move our goddamn cars so that the city does not tow us during street cleaning (I have been a victim of this city game far too many times I must admit)! I sat down with Neil, and also asked him some questions through email about this endeavor. At one point he even commented that street sweepers were “cute.” I’m not sure if that was supposed to be on or off the record, but there it is. No punches pulled here.

Dan Shea (DS): What is your relationship to street sweepers?

Neil Horsky (NH): Like many of my fellow Bostonians, my car was ticketed and towed for a street cleaning violation. It’s a traumatic experience but borne of this trauma is the Street Sweeper Talisman project. A way for me to heal, and you too, friend.

Plus as an art project it is a nice way for me to combine two of my major influences:  Fluxus and Mythogeography. 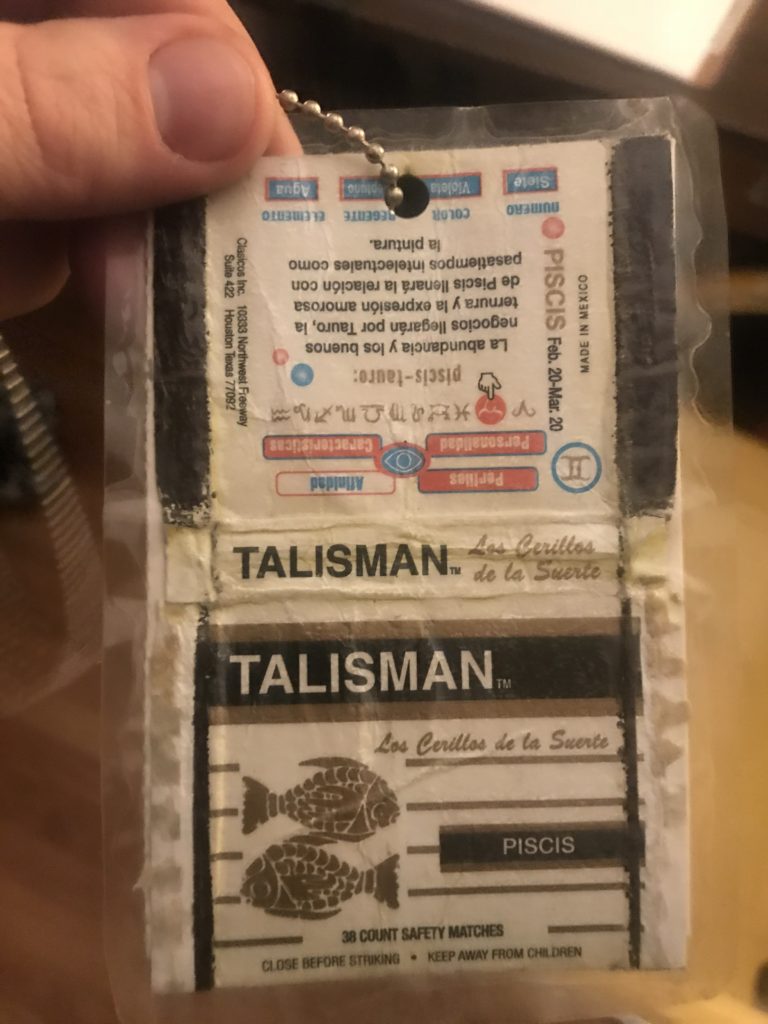 DS: What’s the problem with street sweepers?
NH: A system that cleans the streets at the expense of ruining people’s day, or conceivably they’re entire life if you consider the domino effects of your car being towed, is not an equitable or efficient system.

Plus street sweepers don’t even clean the streets all that well, as the abundance of Street Sweeper Resilient Materials attests to.

It’s not about cleaning the streets – it’s about lining the coffers of City Hall, the tow companies, and the street sweeper manufacturing companies. It’s a big money-making scheme preying on everyday people, like many other realities today.

The scam is so transparently obvious. I’ve noticed sometimes they don’t even sweep in no-parking zones. As soon as the parking area stops, the unswept street begins. Plus street cleaning starts oftentimes at 8am – why not 9am? By 9am more than half the cars parked on my street would be gone commuting, making it easier to sweep but less profitable!

Street cleaning also targets poorer neighborhoods, folks with less influence. Take Chestnut Ave in JP: up on the hill between Green and Boylston Streets with the historic victorian homes on large wooded lots, there is no street cleaning. Cross Boylston heading towards Jackson Square amidst the triple-deckers, and lo and behold, there’s street cleaning. On the same street, a class-based double-standard.

Another world is possible! We need a system where our city can have the clean streets we deserve without screwing our citizens.

A song as old as time… Horsky is clearly a man of the people. He claimed that he had only been towed because of street cleaning ONCE in his time living in Boston! And that emotional and financial trauma was enough to set this project into motion. I think that Neil is a very empathetic guy though, so perhaps he is hypersensitive to the regular ongoing trauma of all of the towings that are surely going on all around him. Though an overhaul of the street sweeping system seems a little out of reach, it was a discussion of exactly this issue that he and his roommate PJ were having when this Talisman idea began to sprout. The night we met Neil continued on the subject, “a person with a broom is a better option.” 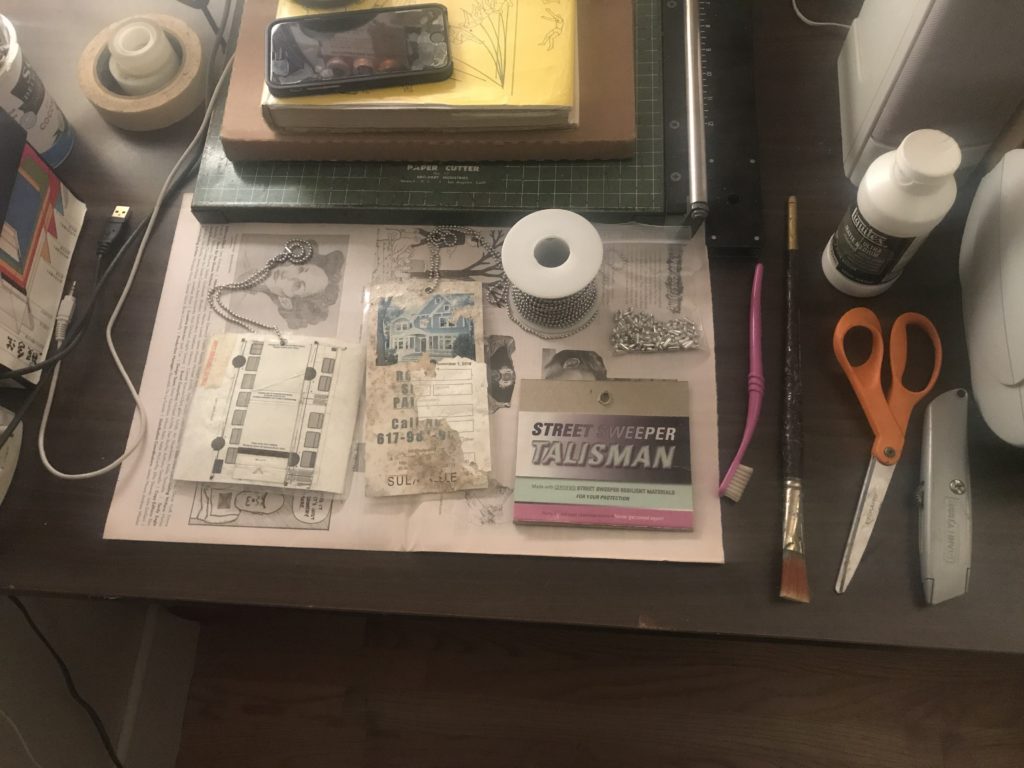 DS: Explain your talisman making process if you would?
NH: Street cleaning is Monday morning in my neighborhood. After the street sweeper wheezes past, I make my rounds. It’s a weekly ritual, unless it’s raining.

I walk around my block and neighboring streets, on the odd or even side depending on the week, scouring the curbside for remaining detritus. I select from these Street Sweeper Resilient Materials items with aesthetic value, that are non-perishable, not too gross to pickup, and thin enough to roll through my laminator.

When I get home I brush off excess dirt and grime, and group the materials thematically by image or word content, or by their formal elements (color/texture/shape). From these groups I choose at least one to craft into a double-sided collage, which I then laminate, hole-punch, and string from a ball chain to hang from your rearview mirror.

Narratives emerge while gathering, brushing, grouping, and composing the collages – within each bit of trash is a story about Boston, being of and from this city. Through an attentiveness to these narratives, I assign social and spiritual meanings to each talisman to guide my process. 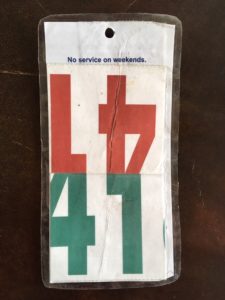 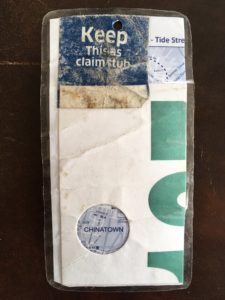 Your talisman, Dan, is about navigating adventure and bureaucracy, being both a subject of the State and an outsider. Angel Rose’s talisman (Citrusphere, Ruby Luna) is about gratitude, the pang of mortality, and Carpe Diem. Others are about luck, chance, superstition, and insanity; the desperate self-loathing of succumbing to vices; the erosion of the middle class; America’s paternalistic and domineering relationship with the Global South; the sterilizing homogenization of gentrification cruelly smothering an undying firelight of multicultural authenticity…

One man’s trash… I have to say that “navigating adventure and bureaucracy, being both a subject of the State and an outsider” does seem to suit me pretty well, and I didn’t know any of this before receiving my talisman. So, it’s kind of like the talisman chose me, right? Neil must be lauded for putting so much thought into trash art. The kinds of artists that work with trash and continue to live in the Boston area (not to mention anyone fool enough to write about such a thing) are in a manner themselves street sweeper resilient materials. The sweeper comes by time and time again trying to get rid of us, but it’s inefficient, so we linger and fester, get moved around a bit from time to time and in the end ideal BECOME ART. 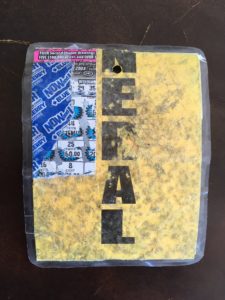 DS: Are your talismans guaranteed to ward off street sweepers?

NH: Street Sweeper Talismans offer spiritual protection for your car. They are imbued with resiliency and we need all the resiliency we can get.

I’m telling the truth when I say my car has never been towed while toting a talisman. More than once I’ve woken up in a start at 7:55am, suddenly realizing I need to move my car. I go outside and see other bleary-eyed pajama-wearing Bostonians last-minute saving their transportation. I have a musician’s schedule though, so – what woke me up?

Also talismans are a practical reminder dangling in front of your face to not park when/where you’re not suppose to. 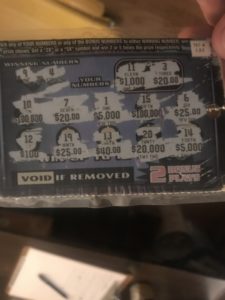 DS: What’s next Neil Horsky?
NH: It’s the off-season for street cleaning but I have a cache of resilient materials to craft in time for spring. That’s when most folks, having been lulled into a lazy state of winter reprieve, are easy pickens for Stanley and his kettle of vultures.

If you would care to purchase a talisman for yourself or a loved one, a selection are available at Dorchester Art Project’s Frugal Collective exhibition presented by the Institute of Affordable Art. Or you can contact me directly. My contact info is on my website, along with documentation of many other projects: horskyprojects.com.

They glow just slightly, in the right kind of light… I have now been toting my talisman for two months or so, and I am tow free. Sure, it’s a small sample size, but that shit’s dangling in my face all the time, how am I ever going to forget again that street cleaning is on wednesdays in my neck of Centre St.!? Street Sweeper Talismans are ONLY $12 @ DAP. Considering the money it will save you or your towing cursed loved one, it is money well spent!