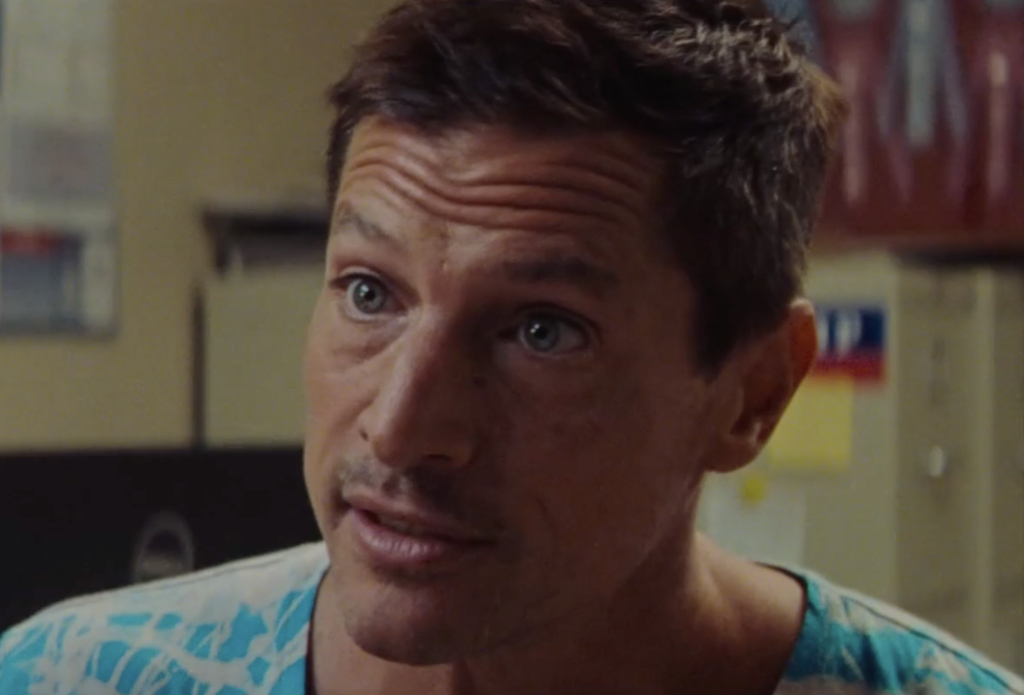 The movie, taking place in 2016, tastefully punctuates its small-town character study with the 2016 presidential election—Donald Trump’s voice is not only set dressing, setting the mood and time period, but also subtext to Red Rocket. Mikey is, of course, an archetype of a distinctly U.S. character, a subversion of the heroic cowboy, representing any number of grifters, pimps, or snake oil salesman that the U.S. seems explicitly designed to create and let flourish. Mikey is nothing but another rootless man with indeterminate ambitions of undefined glory, somehow full of unearned entitlement based purely on his ability to weaponize his conventionality into charm and charisma. And the Texas hometown in which Mikey Saber returns to is but one of any town in the U.S., left behind, left to gather dust.

Since Mikey is the throughline to the whole movie, so much of Red Rocket working depends on Simon Rex carrying his sumbitch persona all the way through to the finale. And everything you’ve heard is accurate: Simon Rex gives a masterpiece of a performance, completely lived-in and indelible. He crackles with compelling and endless energy, all sparks and flames, babbling and twitching. His performance simultaneously pulls you in until you begin to feel a sickening scald, and, quite intentionally, the soulless charisma isn’t so much stripped away in Rex’s performance as it takes on different tones depending on the scene or the scene partner. In one brutal scene, Mikey’s ex-wife, Lexi, (played by Bree Elrod) suggests that the money and stability Mikey is offering can help her get custody back of her son, who was fathered by another man. Mikey’s façade breaks, with Lexi—women in general, really—typically being the root of his annoyance and rage, and he shuts the idea down with a ruthless alteration of his normal charisma. Mikey’s already got his next plan taking shape, and it has nothing to do with Lexi or with Texas City. There’s a flatness to the his performance in this scene that is somehow more unnerving. The smooth talker is still there, but a pure hatred comes close to the surface and puts everything in a new light, one of the closest times the mask seems like it will fall off. The scene ends with Mikey saying, in monotone, “My heart goes out to you what a terrible thing.” Ever the politician, ever the cowboy.

There are a couple of unexpected turns in Red Rocket, which has a languid atmosphere overall that’s occasionally punctuated with dramatic sharpness in a distinctly Sean Baker way. Coupled with his expert composition of Americana, lit with fluorescence and neon in turn, the setting of the movie becomes another character in itself. And Baker is so laser focused on character in such a distinct way, perhaps most palpably in Red Rocket, finding room for everyone to take part in the greater portrait of this man who’ll stop at nothing to benefit himself. The movie builds quite spectacularly to its intensely satisfying conclusion, crafting a bit of wish fulfillment, in ways I found more organic and natural than in The Florida Project.

The thing about a “suitcase pimp” like Mikey Saber is they do get away with the con, some for a bit, some for longer. Maybe they won’t get away with it forever, but perhaps long enough to make it to the White House. Yet it’s not so much that these types of painfully boring and stock cowboys can charm so many, more so that a lot of folks stay away from the hurricane or they put up with the bullshit as long as they can get a part of the cut. But once one domino falls, hopefully all of them do and people find the courage to do the right thing and kick the conman to the curb.

Unfortunately, the thing about folks like Mikey Saber is that, just as quickly as they’re tossed out of town bruised and beaten, they’ll find themselves onto the next plan, onto the next town—they really don’t know how to do anything else because they can’t or refuse to try to do anything else, to do anything right. The movie is cyclical in this way, because no matter how much we try to get rid of this particular brand of U.S. asshole, the Mikey Saber archetype is part and parcel with the U.S. way of life. They’re everywhere and will continue to be until things radically change. But for now, it’ll be a long time before we can say to them, forever, “bye bye bye”.