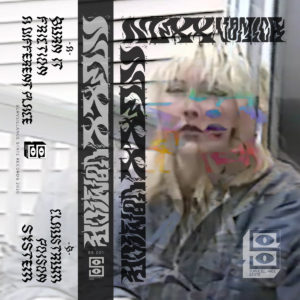 A Different Place is Nuxx Vomica’s first EP release out on Surveillance State records. An expansion on “Burn It,” (a single released earlier in 2020) “A Different Place” spans just over 20 minutes of low fidelity dark trance beats.

The EP features a variety of takes on electronic/darkwave with the inclusion of some elements of industrial and trance. For those familiar with the stylings of bands such as Boy Harsher, the sound isn’t too far off. The primary difference from such contemporaries is in the EP’s insistent drum beats that sound influenced just as much by the 90’s techno style as by any darkwave act. “Poison,” the fifth track on the EP, is perhaps the most obvious example of this. The synth sounds on the track are straight out of something that Paul Van Dyk or Energy 52 might have used back in the day.

The title track is where the artist in Nuxx Vomica stands out among other dark pulsers in the scene. The vocals are present, more dynamic—they allow the listener an intimate audience through the otherwise bumping mechanism of sounds in the mix. The style changes slightly with the introduction of trem-barred guitar chords and riffs done by Kyle Seely, guitarist of Philadelphia punk band Sheer Mag. Surprisingly, the tone of the guitar complements the mechanical sounding synths and drum machines. We end up with a very complete-sounding track more in the vein of post-punk or dark wave than other tracks on the release.

“System” features a more high-energy change from the trance-style beats that feature on the rest of the release. It freely binges into some of the darker elements of electronic music by syncopating rhythms over each other to anarchic effect. The introduction and outro feature a very organic sounding drum, a welcome timbre among a sea of electronics. The track provides a tangible stream of energy to jump into, with the intro/outro serving to resolve the tension of the heavy rhythms in-between.

Minimalist vocals and saturated rhythm lines decorate the space over the drone beat in other tracks such as “Friction.” The beat gets the listener moving with the usual addition and removal techniques that are staples of the genre. A drumbeat will drop out while a new synth fills the space, resolving when the beat again begins to pump. Smooth transitions keep this track fresh, providing new sonic backdrops to color the bass.

Beat-melding, lo-fi noise, rhythm mixing—Nuxx Vomica is working with a large set of tools. For a first EP, the sound and style are surprisingly developed with “A Different Place” showing us some of the more developed possibilities available to the musical artist. The question that keeps prodding me is how the solo act will develop in future iterations. Dance elements in the songs are unquestionable, but there is also an underlying source of anarchy that touches the music. The elements conflict on some level; it will be interesting to see if they continue to coalesce or have to become separate levels of the artist’s style.