This is how music happens. To the unfortunate masses (myself included) I don’t really know what a studio looks like, or can be. I figured in order to explore the term underground further, when invited to Basement Studios in Dorchester (which holds true to it’s name) it would be foolish to pass this opportunity up.

Boston electronic musician Guadaloop, a cornerstone of Basement Studios invited me to see how a musical community breathes together. Formerly ‘No Dude Studios’, and run by Pat Gillespie (singer of new-metal band Nandayo), Basement Studios is a hub for this community to make and spread their creative acts. Guadaloop or Mark Matyczyk’s, music is of particular interest in approach & sound. Matyczyk falls under the category of industrial electronic, if labels are your thing. Nandayo, created as the next separate project from Sounds of the Fallen, which disbanded after the passing of their previous drummer. Now with Guadaloop filling in on bass, Matt Maloney on drums & Javier Martinez on guitar they are a metal outfit in a city with a shrinking scene. Places to play are harder to find, yet to be frank past cultures of outright hatred & anger are changing into one’s more accommodating to diverse artists, which includes the members of the bands being discussed here, the musicians who need to reach new audiences. Though there is tension here, hardcore & metal scenes prevail in the northern & southern suburbs of the city. Guadaloop hails from Milton, Sammy Patio’s is located on Revere Beach & Salem is another story entirely.

Matyczyk, born after his parents emigrated to the United States as political refugees to get away from the Soviet Union makes his erratic, unpredictable music simply, as anyone can. His approach however is unique. He creates with an easy sameness and can become himself through the therapy of music. Never pretentious nor egoistic, he finds a way to order the chaos of the world through soundscapes as tangible as they are mysterious.

‘It seems like the metal scene is mostly dominated by Berklee kids and their affiliates, don’t get me wrong those guys and gals are immensely talented, but I feel like metal isn’t being made for the fans anymore… there’s a complete lack of rehearsal space & venues that can draw’ Pat urges when talking of finding gigs in the city, among other difficulties of being a Boston based musician.

From my humble perspective, interest in music is at a peak right now. There is so much music happening in the Boston area & speaking in terms of local music, there are many communities to join and create with.

Despite the lack of public avenues, musical communities continue to breathe and act much like this one, all asking the same questions without any answers and making music just for the pure joy and therapy of the act. 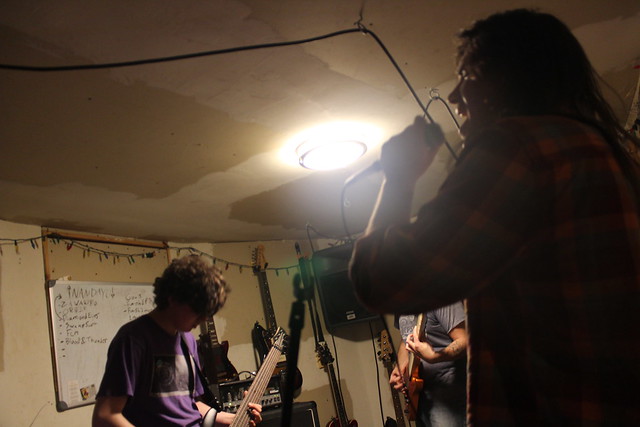 Chris Hughes is a writer, music journalist & music editor for bostonhassle.com. They can be reached at [email protected] or @crsjh_ via twitter & instagram.