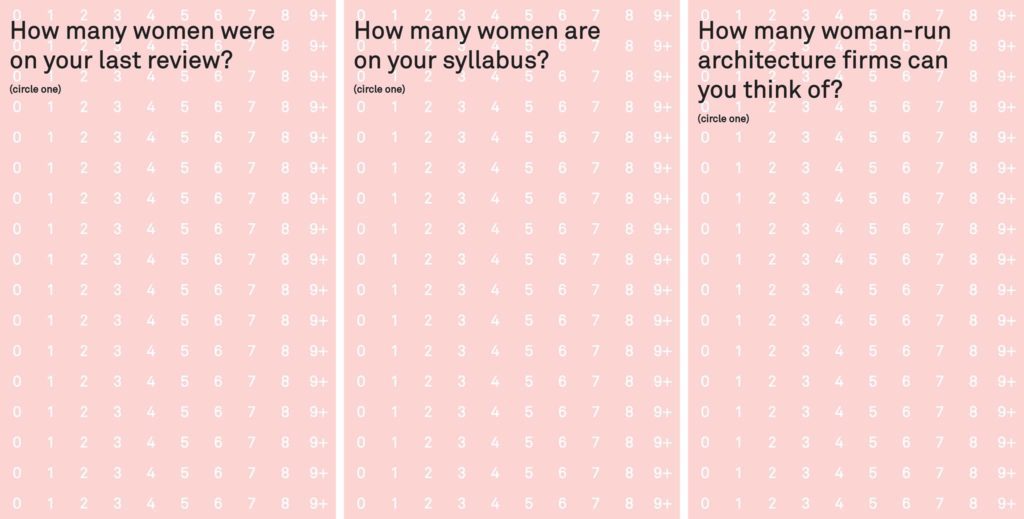 NOMAS Power Lunch: Women in Academia is a panel discussion that will be held at the MIT Department of Architecture tomorrow, Friday March 3, 2017 in Room 7-429.

The NOMAS Power Lunch: Women in Academia panel will be moderated by Emily Watlington, a current graduate student in the Master of Science in Architecture Studies (SMArchS) program at MIT. Watlington and Joyce Hwang, Lauren Jacobi, Caroline Jones, and Caitlin Mueller will discuss the unique struggles that women face in today’s male-dominated world of academia.

Watlington will ask the four panelists to share how they approach incorporating feminism into the courses they teach, and how they use feminist theories in beneficial ways in their own daily lives. She will also touch on areas of recurring frustration, such as the phenomenon of ‘mansplaining’ in the classroom setting:

Men, by and large, are socially conditioned to have a greater entitlement to airspace in seminars. They are often encouraged and rewarded when they speak with confidence—and that confidence may not necessarily correlate to how qualified they are to make the statement they are making.

Mansplainers make three privileged assumptions: one, that the mansplainer knows something the listener does not. Two, that the listener cares about what they have to say or respects their opinion. Three, that they are entitled to the listener’s time.

Of course, these types of frustrations go well beyond the walls of academia. The panelists will be asked about how they address the current patriarchal system that seems to favor and perpetuate the aggressive ‘mansplainer’ mindset, to the exclusion of all others. Yet, when a woman takes on this type of aggressive leadership style she is often resented as being a ‘bossy’ or ‘pushy’ person, paradoxically landing her in a lose-lose position. Watlington will ask the panelists to unpack this dichotomy, and to speak about the nuanced territory that lies in between the personal and political in a woman’s life.

Emily Watlington is a SMarchS candidate in HTC, where she focuses on contemporary art through the lenses of feminist theory and affect theory. She also serves as the curatorial research assistant at the MIT List Visual Arts Center. Prior to arriving at MIT, she received a BFA from MassArt and conducted research on video art in Croatia thanks to the Donis A. Dondis Fellowship. Her art criticism has appeared in periodicals such as Mousse Magazine and Art Papers, and her article on Ryan Trecartin’s high school art is forthcoming in the edited volume Analogue Living in a Digital World (Tasmeem Doha 2017). She has also contributed to exhibition catalogs Looking In/Looking Out: Contemporary Indian Photography from the Guar Collection (Bindu Modern, 2016), and An Inventory of Shimmers: Objects of Intimacy in Contemporary Art (DelMonico Prestel, 2017).

Liked it? Take a second to support Maryam Yoon on Patreon!