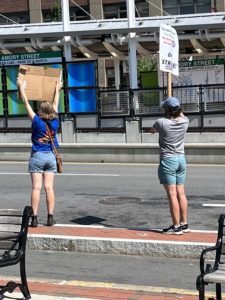 It’s the hottest day of a heat wave during one of the hottest summers on record. A crowd of 10 baristas and their friends stand around the entrance of the Starbucks at 874 Comm Ave. in Brookline. No one is going in today, neither customer nor employee. People wander up, looking for a cold drink, and find their access denied. They shrug or mutter in disappointment, while others look delighted and raise their fists in support. Passing cars occasionally honk in agreement. Each of them is on their way to air conditioning, breezy shade, cool relief. Not the employees. As the sun beats down like a blanket, they take sips of warm water and slick on sunscreen. Nobody’s going in. Nobody’s going anywhere.

According to Spencer Costigan, a 32-year-old shift manager at the Brookline location, strikers hover around the location “almost 24/7”–a strategy to keep delivery trucks away.

“Deliveries are done by teamsters who have a clause in their contract that says they can’t cross the picket line,” they explain. “We’re just keeping somebody there constantly. If they can’t deliver anything, the company can’t open the store with scabs.”

As of July 26, the strike is a little over a week old and Costigan has almost lost track of the support and attention from the media, local politicians, fellow unions, and civilians. The day before, Mayor Michelle Wu stopped by to share her support and to publicly denounce union busting. The Greater Boston Labor Council (GBLC) frequently comes by with water bottles and members of other locals to help man the picket line.

“They’ve been a lifesaver,” says Costigan.

The scene has become familiar in recent years, as young workers both local and national (and especially Starbucks employees) have turned to collective action to amplify their bargaining power. In fact, that’s how the saga of 874 Comm Ave. started; in March 2022 the store voted to join the ranks of the 12 other unionized Starbucks in the commonwealth. Their decision, according to Costigan, wasn’t exactly embraced by management–though a spokesperson did acknowledge the strike in a statement to the Boston Globe.

“About a week (after the store officially unionized on June 3), maybe less, they put a security camera right over our break table,” they say. “We started seeing a lot more corporate presence at the store.”

That corporate presence included the substitution of their former manager with an interim supervisor whom Starbucks had pulled from a store in Belmont. 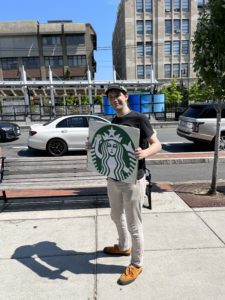 Spencer Costigan stands with a sign protesting managerial abuse at the Starbucks at 874 Comm Ave.

For the newly-unionized employees, it felt like an attack. According to Costigan, their reasons for organizing were standard and in good faith: they were hoping for better pay and more concrete grievance procedures–essentially, more of a voice. What they received for their efforts was someone whom they allege had an overt union-busting agenda, as well as homophobic and racist tendencies. The manager in question did not return a request for comment.

“A week (after unionizing), maybe less, they put a security camera right over our break table.”

Costigan believes that this manager’s position in his store was deliberate on the part of Starbucks, which they said was reinforced for them when they witnessed “classic union-busting tactics like flooding the place with new partners (employees), cutting our hours, and making it miserable there in the hopes that we’d quit.”

Based on the woman’s reputation in Belmont for overseeing a nonunionized store, Costigan further believes “she was explicitly put here because she’s good at beating people into submission.”

There was only a short time between the new manager’s arrival and the store’s decision to strike, as the employees began to feel the brunt of her policies immediately.

Costigan says that, as soon as she arrived, she began cutting hours for current employees while simultaneously looking to bring on new ones. Employees also found that schedule agreements made prior to her arrival were no longer being honored.

According to Costigan, one employee saw her requested 30 hours per week shrink to 10; they noted that employees like her were beginning to struggle financially as a result of the schedule changes. Yet while some were forced to take a cut in hours, others were forced to expand their availability on pain of retribution.

“She had a meeting with shift leaders on one of her first days in which she hinted that she wanted to fire partners with availability of less than two days a week,” writes employee Sarah Chan in an eight-page missive to Starbucks district manager Phil Mann that was signed by the workers. Costigan confirmed that they’d been asked by the new manager to “tell a number of partners to expand their availability or they would have to be let go.”

“Some of these people are some of the hardest working people that we have in the entire store,” they add. “Just because their summer availability is different from what they can do in the school year, they’re being told that there’s no place for them at this store–and that’s just not not true.”

Some of the new manager’s imposed policies, according to Chan’s letter, included not informing workers ahead of time if their shifts had been changed, and not allowing them time off “to move into their own new apartments” ahead of the upcoming school year.

Additionally, the letter alleges, some of the new manager’s behavior runs contrary to Starbucks’ own employee manual. When a barista experienced a death in the family, the manager told her that she should use her vacation time to cover the missed shifts. The company’s bereavement policy, quoted in the letter, “provides for time off for a partner who experiences the death of a family member” of “up to two consecutive days for grieving” and up to four days total if overnight travel is involved.

“Just because their summer availability is different from what they can do in the school year, they’re being told that there’s no place for them at this store–and that’s just not not true.”

Beyond concrete breaches of company policy, both Costigan and Chan have noted that the new manager has strayed from the broader company tenets such as “cultivating a culture of inclusion and diversity, with a focus on partner retention and development,” per the employee handbook. The letter alleges that, on her first day in the Brookline store, the new manager tore down an LGBTQ+ pride flag banner because it “was covering a mural,” but never put it back up elsewhere. Incidents of misgendering were also noted in the letter.

In one instance referenced by Costigan and Chan, a white employee was not made to wear a hat as part of a new, stricter, dress code, whereas a Black employee with textured hair was. According to the letter, the new manager said at the time of the incident that “(Black employee) would clearly need the visor more than (white employee.)”

To contrast this directive with Starbucks’ own literature, Chan quoted the employee manual in her letter as vowing to “(work) closely with our Partner Networks to better and support the experiences of our BIPOC partners.”

It only took a month before the newly-unionized employees at 874 Comm Ave. decided to strike. 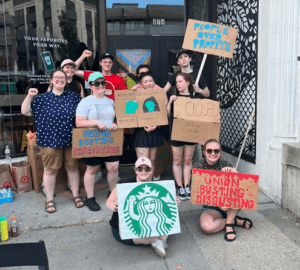 Members of the Starbucks strike, including employees and their supporters, hold signs in front of their store.

“If everybody in the store feels uncomfortable and threatened by the very presence of management, that’s untenable.”

They add that their first point of contact was Starbucks Workers United, which “(covers) all of the Starbucks in America that are unionizing,” and helped them coordinate legal protection and wage compensation. As the strike matured and GBLC got involved, the employees are beginning to feel more empowered, though they know the road ahead is long.

So the days wear on and the sun beats down. As of press time the striking workers report no attempts at bargaining made by corporate, but they say they are determined to show up, sweat, and hold the line until changes are made.

Costigan feels like people their age and younger have a duty to show up in force in the face of managerial abuse. If not them, who?

“Our parents and grandparents got what they got through labor organizing, collective action, and strikes,” they say. “Young people are more willing to stand up for themselves because we don’t have any other people to do it for us.”

To support the workers of the Starbucks at 874 Comm Ave., you can donate to their strike fund here and read Chan’s letter here. More information about Starbucks Workers United can be found here.

Catch "My Mechanical Sketchbook: Barkley L. Hendricks & Photography" before the show closes on 7/24