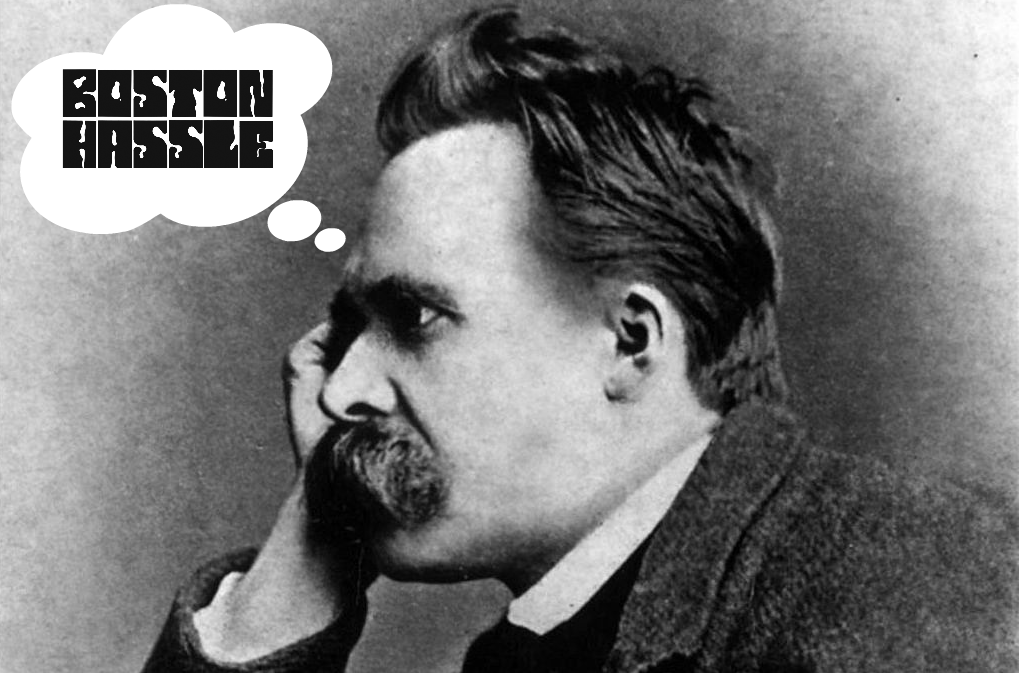 Ah yes, the suffocating and all too familiar threat of meaninglessness. While existentialists over the ages have conjured up different ways to combat the inevitable, Friedrich Nietzsche perhaps had one of more compelling strategies…but the craft is not quite for everyone.

Nietzsche believed that if we treated every event in our life like art—something that is beautiful, important, and significant—then we can give our life meaning when faced with the threat of nihilism. However, he also seemed to suggest in The Gay Science that artists don’t use the strategy themselves, saying for them “this delicate power stops where art ends and life begins; we , however, want to be poets of our lives, starting with the smallest and most commonplace details.” So, non-artists can opt to look at moments in their life as art, filling their life with purpose—an “everything happens for a reason” sort of approach—but artists cannot carry over the beauty they create and see in their art to their own lives, suggested Nietzsche.

But putting this philosophy into practice, bringing it from the conceptual world to the dingy basements and beer-soaked clubs of Boston, the results were not as straightforward as Nietzsche seemed to believe them to be. Three musicians active in Boston’s music scene weighed in on how their art, the music they create, is used in bringing sense, clarity, and a narrative to their lives—or how it doesn’t. Though diverse, their answers all had one thing in common—their art influenced how they interacted with their lives, whether it has been through interacting with the self and helping to make sense of their own lives, or through interacting with others which in turn have influenced their lives’ narratives.

For Abby Heredia of Boston electronic group Miss Geo, music has been vital in how she has viewed and lived her life. The roles music held shifted over time as she evolved as a person: a mutual development between the art and self.

It started out as a fundamental part of Heredia’s childhood. Her mom, being a music teacher, would bring home instruments like finger cymbals or guiros that Heredia would play. Living in the Philippines, Heredia recalled that many of the girls her age would enjoy and excel at karaoke and dancing, but “I was never one of those girls,” she said.

Delving into the musical world continued for her when she first moved to the U.S. and watched VH1 and MTV, seeing she didn’t necessarily have to be good at singing to create music. When Christmas rolled around, her mom got her a tape recorder, marking the beginning of Heredia’s personal experimentation with music.

However, it wasn’t until what Heredia described as her “angsty teen years” that music became a vital instrument and influence in her life.

Having moved back and forth from the Philippines to Newport, Rhode Island, her family had to seek permanent asylum in the States in the ‘90s when there was extreme political unrest back in the Philippines.

“ is how I would cope with things, because it’s hard moving and then switching languages and then switching schools and then your whole mode of thinking,” said Heredia. “There weren’t that many other minorities that I could relate to. I think I was the only Asian person in my whole school, and then on top of it I was gay. I think I fake assimilated well, but I just felt like I really didn’t belong.”

From there, Heredia became “more drawn to the creative aspect” of music and began writing politically charged folk songs. She used it as an outlet to express the violence she had seen in the Philippines and the confusion she felt upon moving to the U.S.

“It became a means for me to make sense of what was happening around me,” she said.

Though Heredia has transitioned through many musical genres—from folk to indie to math rock to alternative rock and to most recently pop with Miss Geo—the role music plays in her life remains just as important in how she interacts with and understands what’s going on around her. It instills a purpose and a sense of comprehensible organization to both the positive and negative moments she encounters.

“There were times when I tried to stop , and then I got super depressed, where I felt like my life was meaningless,” Heredia reasoned.

In terms of Nietzsche’s assertions, Heredia’s experience is blatantly in opposition to what he suggested; her art was, and continues to be, a medium to make even the most negative experiences make sense or be accepted in her life’s narrative, and to also generally instill a sense of purpose. The angst and confusion in her teen years in Newport to any hiccup she runs into today are all validated and understood through her creation of music.

In 2015, Jeff Somers released his debut record, Grips on Heat, under the name Steep Leans. Sonically, the record is hazy, unclear—the kind of album you’d drive around to at night with no destination in mind, questioning everything, but finding nothing.

“I was trying to convey a moment in my life and expel those demons and capture something that was traumatizing for that record,” said Somers. “It was a foggy situation, a very unclear time in my life.”

In this situation, Somers said he wasn’t using his art to bring any sort of clarity or beauty to his life at a time where he was coping with loss. Instead, the music consumed itself with the negativity and confusion. The album wasn’t an attempt validate the moment as instrumental, but to embody, if not immortalize, that dark feeling in an honest way.

Over 20 years of being involved in creating his own music, Somers said that, sure, making music played a large role in his life; “I could just play music. It just happened naturally, and I loved it.” He even admitted that it fueled many of his life decisions, “but it wasn’t like I was playing music to be more sane or something,” he said.

Though Somers doesn’t necessarily utilize his art as a way of making sense of what’s around him, he did describe music as being a “portal” into both positive and negative emotions which he could capture in music. Similarly, he feels like music provides some type of order—not necessarily to his entire life, but there are instances within it that seem organized.

“It’s order out of complete chaos, a song,” said Somers (Jean-Paul Sartre’s Nausea, anyone?) “You create it by what you’re influenced by—a whole mishmash of history.”

Otherwise, Somers’ relationship with his music seems to support Nietzsche’s assertion that artists don’t actively use their art to give moments in their life significance to ultimately make their lives meaningful. But what the existentialist failed to acknowledge is that perhaps artists use their art to connect with others in a meaningful way. Whether that would in turn make a life purposive in Nietzsche’s eyes doesn’t seem likely, but for musicians like Somers, it seemed to hold a lot of personal significance.

“I have a hard time sometimes of connecting or getting my point across to people. I think everyone does,” he said. “So I think Steep Leans is about me trying to connect my inner self to other people to some degree.”

In this sense, Somers uses his art for a purpose. Not necessarily as a way to validate or understand his own life, but rather as a vehicle to make others understand it and to make connections outside the self.

“I have a need to see people for what they are and see the world for what it is—to truly, honestly try to connect with the world around me in an honest way,” said Somers, and music helps him achieve this.

So, artists like Somers may not be consciously using their art in a way that makes their life more significant, but this evidence suggests that they may use their art in a meaningful way in brief instances in their life.

Similarly for Joe Kerwin, guitarist and songwriter of Boston-based indie pop band The Water Cycle, music has allowed him to make external connections.

“I do think me with music versus me without music, me with music is a lot more engaged,” said Kerwin. “And I’ve just seen so much more and interacted with so many different kinds of people through music than I wouldn’t have been able to without.”

Music has been a “social outlet” in his life. He recalled a time at summer camp when his counselor described him as quiet, except when he was talking about music, in which case “he’d never stop.” In this way, Kerwin has used music much like Somers has to connect with the world outside the self.

In terms of interacting with the self and his life, Kerwin doesn’t believe there is much of a correlation.

“I don’t feel like I’m solving any problems through making music,” said Kerwin.

Being fairly new to songwriting, starting a few years back in high school, he takes a more methodical approach to songwriting, so besides basic inspiration he “mines” from his life, there isn’t much of a correlation between his music and life narrative.

“I hope that the more I do of , the more comfortable I’ll get and I’ll have that kind of flow where it can be helpful in some way,” he said.

Even if he’s not solving problems or using music in a constructive and conscious way to bring significance to individual life events, Kerwin does believe music does have a certain quality about it that can change an outlook.

“When you take an insecurity and sing about it, it becomes a strength in a cool way,” he said.

In that sense, music can be used as a reflection of an artist’s life, but the artist isn’t necessarily doing so for a particular reason, reasserting Nietzsche’s assertions.

When facing the ever-present threat of nihilism, artists—like Heredia, Somers, and Kerwin—may or may not use their music to directly combat that threat; it’s largely individualized. But regardless, music itself has played a significant role in all their lives, and has allowed them to connect with themselves, others, and the world in a seemingly meaningful way.