Dating Amber is a deliciously vulgar teen comedy that is sure to fill that Derry Girls-shaped hole in your life. Set in 1990s Ireland, the movie is about two closeted queer Catholic high-schoolers, Eddie (Fionn O’Shea) and Amber (Lola Petticrew), who decide that pretending to date each other is easier than shrugging off the taunts of their classmates. What starts out as a promising quick-fix solution proves to have unexpected consequences, particularly for Eddie, who’s long-repressed anxiety about being gay begins expressing itself in sometimes hilarious and sometimes frightening ways.

The movie is a clever twist on the standard teen comedy trope of “pretending to date someone for reason x,” adding moments of humor or pathos in unexpected places. Director David Freyne additionally steeps the movie in Gen X moments, particularly the music, the style, and the conversations du jour of 1990s Ireland—especially where it concerns (slowly) changing attitudes towards divorce.

This concept of divorce is presented throughout the movie, as are other details that paint compulsive heterosexuality as something damaging to everyone, not just queer folks. Whether Eddie’s parents or the high school teenagers who surround them, many of the “straight” characters appear miserable to be confined to the rigid heterosexual regulations of Catholic Ireland. Even the sex education tape that a nun shows to the class is a satirical presentation of just how sex-adverse such a society can be. This compulsive heterosexuality and sexual aversion is, of course, forever incorporated internally by children and teenagers. The movie is populated by high schoolers picking on sexuality or lack of sexual experience. Even the “shifting” between these teenagers seems rote and passionless, so much so that Amber even makes money off of selling the use of one of her mother’s abandoned trailer park trailers for her classmates to have sex in.

It isn’t until Eddie and Amber find each other and find queer spaces that their world becomes something more warm and intimate. With each other they find queer support, and in the gay bars and queer concerts they go to, they start to find passion. The filmmaking matches this shift, the lighting becoming romantic, effervescent, or joyful. Eddie and Amber react quite distinctly to these new experiences, however. Amber readily accepts this as home, while Eddie often mistakes the feelings of the heat of desire or the warmth of home as something that can scald or burn. And his pain causes him to retreat further into the conventionally masculine mores he’s found such, relative, security in. 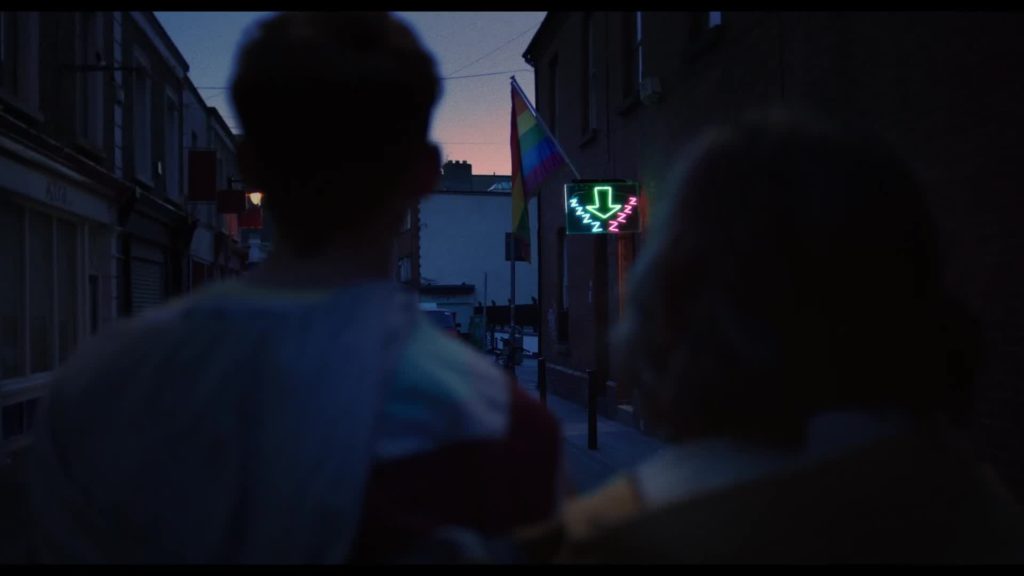 The cast is able to traverse the tonally shifting series of mixups, revelations, sadness, and humor with such emotional resonance throughout, and O’Shea and Petticrew are consistently hilarious and full of depth. Likewise, Sharon Horgan, Barry Ward, and Simone Kirby, who play the leads’ parents, provide varying degrees of competent parenthood, proving to be both funny and heartbreaking. They, like every character in the world of Dating Amber, make the movie feel distinctly real and relatable amidst its screwball premise.

Although the movie can be rather light or trite at times, even during it’s more gloomy moments, the overall humor and tenderness is a welcome balm. This isn’t to say that the movie has a neat or happy ending, though. Dating Amber is complex enough to avoid that vapid platitude of “it gets better”. Instead, Dating Amber rather adeptly explores the possibility that queer homes—whether in physical spaces or in the arms of a friend—can help to make the painful or scary parts easier to endure, even when you have to endure them alone.

Dating Amber is available to stream through NewFest now until Tuesday, 10/27
Available on demand and digital 11/15