Somerville artist Maeko releases “Cool”, an indie pop tune about honoring your inner child by not taking yourself too seriously.

To consider Tiktok a kids’ app for viral dances and lip synching is a severe underestimation. The almost annoyingly addictive video sharing app is gaining momentum, overtaking apps like Facebook, who recently reported a decline in daily users for the first time ever. According to Hootsuite, “Eight new users join TikTok every second, with an average of 650,000 new users joining daily.”  And thus, the platform is a great place for independent musicians to reach a global audience—but only if they find a way to stand out.

TikTok’s algorithm tracks users’ viewing, sharing, and commenting behavior and uses that data to guess what you want to watch with stunning accuracy. To the advantage of up and coming musicians trying to promote their music, the app doesn’t necessarily have a bias toward well-known creators with large followings.  In 2020 TikTok revealed:

“…sometimes you may come across a video in your feed that doesn’t appear to be relevant to your expressed interests or have amassed a huge number of likes…bringing a diversity of videos into your For You feed  gives you additional opportunities to stumble upon new content categories, discover new creators, and experience new perspectives and ideas as you scroll through your feed.”

Dev Lemons contemplates how nice it would be to shut your brain off once in a while and just enjoy the ride in “Autopilot.”

Boston artist Maeko has been posting videos on TikTok to promote his latest single.  The posts are short comedy sketches or heartfelt text over video taken from the POV of a spinning ceiling fan, but they’re all meant to build hype for a single’s release.  He considers making TikToks, often up to 3 a day, just part of the gig. “It for sure feels excessive, but for the time being I’ve started to think of it as a job, or part of a job.  I will say that it has paid off more than any social platform, by far.”

A common approach to promoting one’s music online is to craft a sympathetic and often exaggerated personal narrative. In 2021, YouTuber and musician Lael Hansen was widely mocked for guilt tripping viewers into listening to her music. She claimed to be a struggling artist from the middle of nowhere who could never make it big (despite having a million YouTube subscribers and tens of thousands of dollars of robotic video equipment to use in her music videos.)

Emerson College alumna Dev Lemons, a musician and content creator, relies on her absurd sense of humor, rather than sympathy or contrived relatability in her TikTok videos.  “I honestly wish I was more comfortable being serious online because I think people would maybe relate to it more. But in a way I’m also very much myself when making these silly dumb videos online because it’s what I’m most comfortable doing. I love to make people laugh… My thought process behind shitposting and meme-ing online is that being my silly self will make people like me first. And if they like me, maybe they’ll be more inclined to keep up with my music!”

@dev_lemons Where should I do this next (ib: @cashout_mikee ♬ Autopilot by dev lemons drops april 15 – Dev Lemons

In Maeko’s first post on TikTok he nods to the “woe is me” musician trope by jokingly purporting to be a lowly janitor at a music studio in Boston who forgoed a paycheck in lieu of studio time to record his song, a la Good Will Hunting. “I feel like there are some usual suspect themes when it comes to TikTok musician content. I try to lean into the comedy when I can cause having fun with it makes it more doable for me. But yeah, haha, I wasn’t intentionally poking fun with the Good Will Hunting joke but I can see how you might think that.”

It’s important to mention that TikTok actually is addictive.  The highly-personalized customization of one’s “For You Page” allows users to easily get sucked into a wormhole of stimulating videos. In her book Dopamine Nation, Dr.  Anna Lembke warns that addicting behaviors, such as endless scrolling, can magnify depression and anxiety, because one’s brain is trying to balance pleasure by causing pain. That’s why many feel sad after a TikTok binge, and why they might pick up their phones to quell the sadness, continuing an endless loop.

If an artist’s role in society is to thoughtfully critique political and social systems, will the counterculture eventually reject corporate-owned social media and go offline? Probably not soon. Dev, who runs a YouTube channel called SongPsych that covers online music trends, says “Social media is the only way artists can reach a global audience and make a name for themselves independently. If corporate owned social media is rejected, artists will have no choice but to go to corporate-owned labels to be able to sustainably have a music career. Music has always been corporate to some degree. The way it is now is the least corporate it’s ever been. I think the internet is the future of music.” 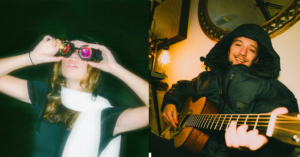 Liked it? Take a second to support Ian Bauer on Patreon!