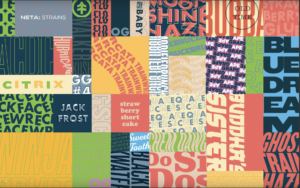 In the shadow of the dark grey stain cast behind the non-existent Brookline Bank sign, folks from all different walks of life peruse the menu, chat about their experiences. Days after recreational NETA opened in Brookline, people are still lined up – even in the rain.

Dispensary staff answered questions, IDs were checked, and suddenly we were inside.

Domed, with church-like ceiling windows, the contents of the bank looked almost like the set of some reality show for tellers. The emerald green of the vault highlights the surreal nature of the scene.

It just so happens that this building, a national historic residency, is also within a zone that allows for dispensary operation.

For a brief moment I consider bricks of cannabis like gold bars stacked, and a masked, Hamburgler-style villain character perpetually attempting to burgle them.

NETA has been open for medical patients since February of 2016. Because pre-existing medical facilities were prioritized for licensure, NETA was able to open in Northampton, the first recreational dispensary in the state. After a series of inspections, as well as provisional licensing and approval on a local and state level, the Brookline store became the first recreational dispensary in the city of Boston.

After making it to the front of the line, I learned that there’s a fee for credit cards because federal banks won’t take the money earned; suddenly, the reason for the old-fashioned bank aesthetic clicked in.

Although still illegal on a federal level for recreational use, Massachusetts legal cannabis is taxed by the federal government.

Doctors still can’t technically “prescribe” medical cannabis to their patients, although it is “recommended” for people with a myriad of ailments all over the country. In most states, the federal government has the looming capability to take it all away.

Cash, upfront for uninsured medicine exposes complications in the law. Although really they are just prohibition’s death throes, clever business people have found ways to work around things. With the amount of cash they must accept and the value of their products, a vault should help deter a robbery (cue Weedburgler).

But the bustling yet hyper-organized interior felt more like a line for an M. C. Escher-themed ATM than a 1920s speakeasy. The roped off lines led to a glass counter for medical patients to peer through. Recreational users must choose from the menu before approaching the teller cubicles. There’s no chance to view the product before purchase.

Medical patients are able to not only acquire more product per visit, but they may also look at the products offered within a glass case.

Although recreational users are given the same menu, they aren’t allowed to buy products such as 5 packs of pre-rolled joints. Access to more product, and higher dosages are accompanied also by a program called “Why Wait for Better Health.”

NETA promises to essentially refund the uninsured fee to get a medical card with $200 of store credit if you visit the dispensary within 30 days of acquiring it. Patients are not subject to the 20% sales tax, according to Amanda Rositano, Director of Compliance for NETA.

Change is indeed happening, with major strides taken regarding public opinion, especially within the past 20 years.

Albeit slowly, much more slowly than I got to the front of the line at NETA. The sense of community was strong, strangers introduced themselves as they read over the menu. Folks discussed everything from how much longer lines were on previous days, to how it’s nice to not have to get in some “sketchy guy’s car” to get weed anymore.

Others left the line, perhaps to consider some kind of happy middle ground between their “sketchy” friend of a friend, and their state government.