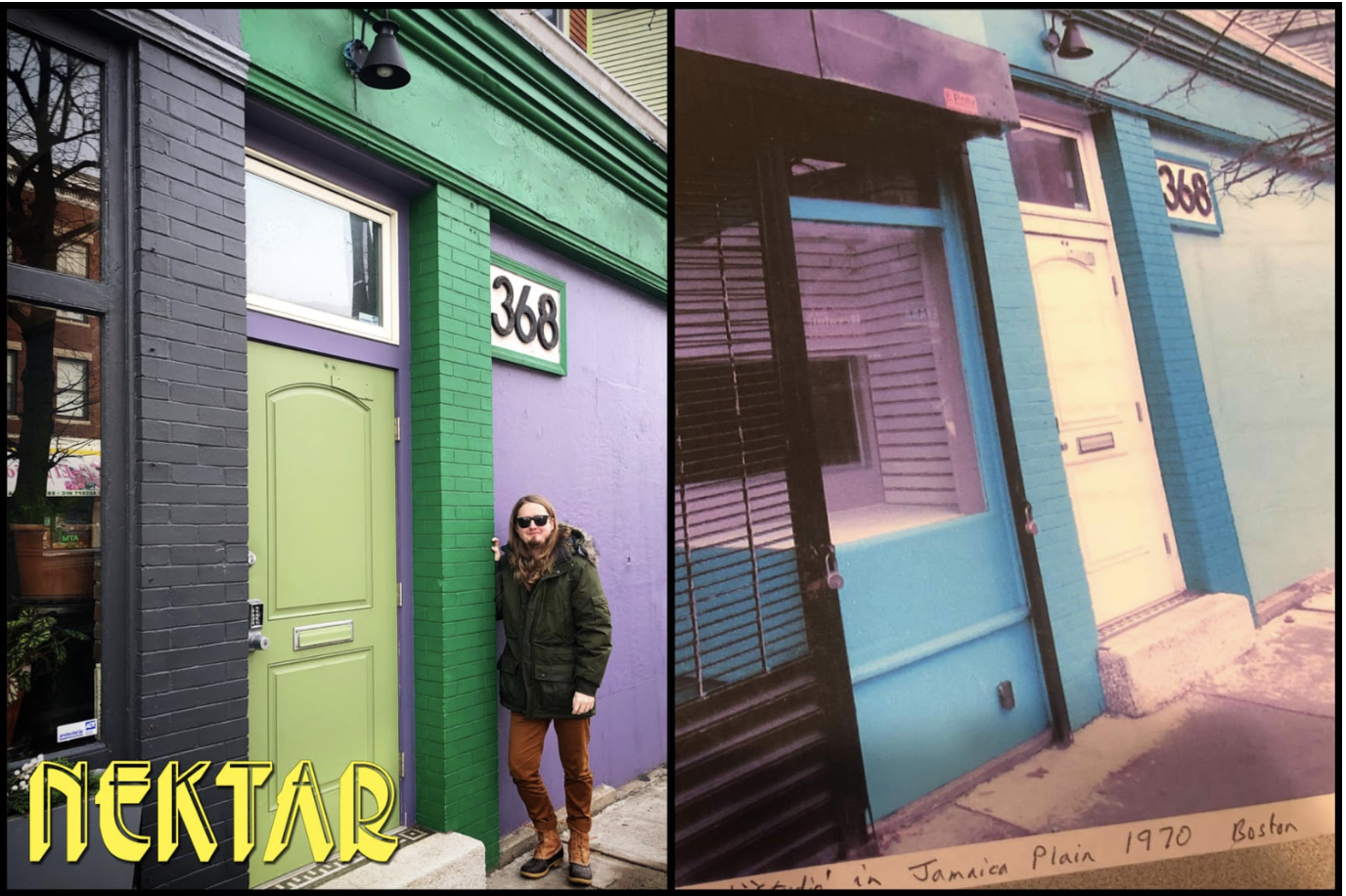 Left: John Campopiano outside Dimension Sound in JP in 2019 (credits to his wife). Right: The same studio entrance, 1970. The band’s sole surviving photo from the Boston sessions.

We’re not even a full month into 2020, and fans of progressive rock already have a reason to celebrate. On January 24th, to celebrate their fiftieth anniversary, Nektar released The Other Side, an album composed of eight tracks leftover from the band’s peak of popularity in the 1970s. They were known for their live light show, created by special effects artists Mick Brockett and Keith Walters, as much as for their music.

Based in Germany (“Nektar” is German for, predictably, “nectar”), the band of Englishmen were best known in the United States for concept albums like Journey to the Centre of the Eye (1971), A Tab in the Ocean (1972), and Remember the Future (1973). Tab featured “King of Twilight”,  later covered by Iron Maiden, who released it as a B-Side to “Aces High” in 1984. Future established Nektar’s cult popularity in the U.S. and led to this performance at the BBC.

Before Nektar were prog rock legends, an American producer named Charlie Dreyer caught their show in Hamburg and invited the band across the Atlantic to record a demo in his studio. That studio was Dimension Sound in Jamaica Plain, and there, in 1970, Nektar recorded the appropriately-named In the Beginning/The Boston Tapes. This EP led to them signing a contract with Bellaphon Records, and they made Journey just a year later. Believed to be lost by many fans and collectors, the Boston tapes were remastered and released in 2006 in the band’s Collectors’ Corner series.They’re also available to stream on Spotify as part of the 40th anniversary edition of Remember the Future.

Each song on the EP was meant to be marketed as a single, which meant they had to be radio-friendly and under five minutes, a challenge for a band who were used to making thirteen- and forty-minute tracks. The Boston tapes included songs each band member wrote and brought to the studio, plus a cover of early-’60s teen pop icon Brian Hyland’s “Sealed With a Kiss.” Several of the songs were updated and released on Sounds Like This (1973).

“It was the first time we were recording in a studio,” bassist Derek “Mo” Moore said of the band’s time in Boston. “We loved the area, we loved staying there. We also saw Poco in their first gig at the Boston Tea Party Club.”

That venue closed later in 1970, after hosting acts like the Velvet Underground, The Grateful Dead, and Led Zeppelin.

The studio itself, Dimension Sound, was also closed until current owner Dan Cardinale purchased the space in 2011. In its new life, the studio has hosted the likes of Josh Ritter, Lake Street Dive, Darlingside, and the Ballroom Thieves.

Persistence seems to be a theme here. After dissolving multiple times throughout the 1970s and ‘80s, Nektar’s original lineup reunited in 2000 and have continued on, despite the death of lead singer Roye Albrighton in 2016.

Their latest album has led to another tour, and this February, they’ll be stopping in Boston for the first time since 1970.

“I never realized we’d never gone back until I looked up our entire touring schedule,” Moore said, when I asked his feelings on returning to the first American city Nektar had visited. “We’re very much looking forward to playing for our fans there.”

Those fans will probably include local filmmaker John Campopiano (archivist for WGBH, founder of the New England Media & Memory Coalition, and vinyl collector) ), who discovered Nektar while scouring Luke’s Record Exchange in Pawtucket, Rhode Island in the early 2000s. Sadly, that store closed in 2010.

“I was taking chances on bands I’d never heard of,” Campopiano said. “One day I found Nektar’s 1974 album Down to Earth, and something about it spoke to me. I bought it, took it home, and I’ve been a Nektar superfan ever since.” He went on to praise the band for making each album unique while keeping their essential sound.

When I asked him his thoughts on the band making new music, he said, “It’s a gift to the fans I never dreamed would happen.”

That gift is available now on CD, vinyl, and streaming services. My personal highlight was the reflective closer, “Y Can’t I B More Like U.” Opener “I’m On Fire” is not a Bruce Springsteen cover, but rather a mainly instrumental mix of a poem Moore wrote for his wife-to-be in 1978. He also noted that “Drifting” was recorded live in one take, and “Love Is/The Other Side” is among his favorites, although he loves each song for different reasons.

As Nektar return to their roots with new imaginings of old songs, catch their return to the city where they started their journey. They’ll play Monday, Feb. 10th at the Middle East Upstairs in Cambridge. For our Western Mass pals, they’ll be at Northampton’s Iron Horse the next evening. Learn more and find ticket information at Nektar’s official website here.