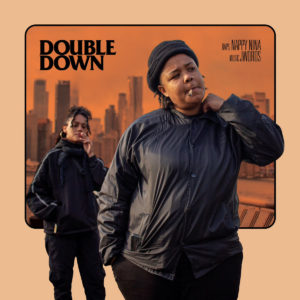 Nappy Nina wastes no time on Double Down. The album, released earlier this year, runs 9 tracks and clocks in under 18 minutes. Two features (three if you count the voicemail track “Enter”), no frills––Nina exerts minimal effort as she flows confidently over producer JWords’ rapid, hypnotic beats, as if to signify that rapping is just too easy for her. She appears put together and in control, focused on her craft and unfazed by distraction. It’s easy to get lost in the rhythms of her self-assured delivery; words melt into sounds which skate by so smoothly that her cadence becomes trance-like.

Double Down isn’t just about an underrated rapper and producer flexing their collective chops (although the fact that it is partially about that is much to our benefit); it’s also about Nina’s life as an artist who hasn’t “made it” yet and the toll that lifestyle takes. In an interview early last year, Nappy Nina talked about trying to get to a place where she was “eating off music.” But a lot of aspirations have been deferred in the last year, especially in a music industry where live performances have been near-impossible. A lack of concerts in the age of exploitative streaming practices means less money for artists––not a huge problem if you’re Drake, but a much larger one if you need that cash flow to pay bills.

The bars on this album come like a flurry of punches; each time I listened, I caught something new. But within Nina’s rapid-fire delivery lie some pretty bare-bones raps––admissions of how life really looked for her last year. Sometimes it’s about her material reality: being late on rent, staying late at the studio, or wanting to quit cigarettes. Other times it’s more internal, like on “4am” when she admits “Been thinking ‘bout death lately/Keep it a buck,” or on “SCRD”: “The paranoia will destroy ya / I ain’t gon’ hold you, I’m there.” The simplicity and honesty that she claims both in her life and her own thoughts is part of what makes her lyrics so potent. She’s not a character, not above any of us or even a dramatized version of herself––Nappy Nina is just trying to survive.

Nina doesn’t need outlandish imagery to keep you intrigued. Instead, she raps with conviction and a hushed urgency, like she’s divulging some of life’s secrets and trying to do it fast, before someone else finds out. When she raps “The therapist won’t text me back / What mess is that? / While we slept they taught us rest was bad / Some sort of math,” on “Messy,” it doesn’t feel like she’s throwing that thought out into the ether, but rather like it’s a conversation between the two of you and she’s compelling you to respond to her outrage with agreement.

That quality imbues the album with a feeling of confinement and intimacy, but Nina has also described it as “a call to mass movement” that “forces folks to make dance floors of the spaces we have been stuck in.” This seems paradoxical, but JWords’ steady hand in production merges the vibe of a late-night living room chat with the energy of hitting the club; or rather, the living room becomes the club.

Her beats are fun, up-tempo, and idiosyncratic, featuring driving drums and sound choices that feel as aligned with electronic music as they do with hip-hop. Mood-wise, she keeps it versatile and dynamic. “Messy” beeps and dilates like bubbles floating to the water’s surface and then popping, rhythmic but scattered. The drums on “Wanted” evoke a racing heart beating against a dark and haunting backdrop, while “Real Tea feat. Stas Thee Boss” is psychedelic, all twinkly, arpeggiated keys. And then there’s “4am,” the last track on the album, which is centered around a calm, jazzy piano sample and not much else, allowing for a moment of decompression––a come down. Nina’s earnest reflection on childhood and trauma shines over the minimal palette.

A lot of mainstream rappers lean on opulence: think Rick Ross and Migos, the incessant allusions to Rolexes and Patek Phillipes. Materialism is less rife in the underground, but a lot of rappers still lean on a level of opacity or metaphor to stay safe and create distance between themselves and their persona. Nappy Nina is providing something different: a refreshing candor. And she backs it up with some of the smoothest flows around. (If you’re looking for a prime example, listen to the tornado of internal rhymes she unleashes on the second verse of “Table Set”.)

A few months ago, Nappy Nina was asked how it feels to finally be getting noticed and covered in the media. “I wish that it would change the money in my pockets,” she said. It seems like she is going to emerge as someone who makes it, at least enough to keep making music. But the picture she paints on Double Down reveals that there’s little glory in the grind. We deserve to live in a world where artists can pursue their art without worrying about paying for their basic needs. Until then, keep buying music if you want someone to keep making it.

Liked it? Take a second to support Gabe Sherman on Patreon!