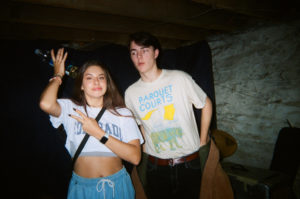 Music and image are fundamentally inseparable. Nearly every great musical artist has either embraced this fact, or unknowingly benefitted from it. From the birth of album art in 1938, to the advent of the music video, to dawn of social media, music has always evolved alongside its visual aesthetics and the visual arts scene as a whole. Central to and present in every evolution of these aesthetics is clothing. Album art was created to show off the stylish, classy musicians behind popular records, music videos were created to establish a band’s general reputation as genuine cool-guys, and social media has always been used to carefully curate an artist’s image- usually through long lists of endlessly market-tested flexes.

However, this paradigm has always had its critics. Many musicians see image as unnecessary, distracting, superficial, exploitative, or all of the above. For as long as the genre has existed capital-R-Rock or capital-P-Punk artists have rejected – or, at least, mockingly toyed with – the visual aesthetic labels and other industry heads told them they needed to embrace.

The issue with this is that these rejections of image usually end up aging in one of two ways: First, and most commonly, they end up looking pretty foolish. Everyone loves The Replacements, sure, and their rebelliousness is part of what made their songs great. Their rebellion against music videos as nothing but as sellout marketing tool, however, seems massively misguided in an age where music videos are increasingly created by independent musicians and filmmakers of their own accord, and increasingly used to enhance the message of the music or offer their own unique messages. 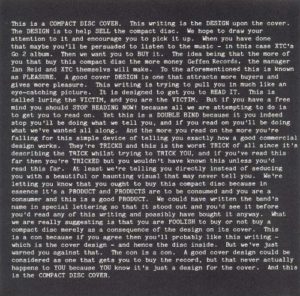 So in as few words as possible, image is unavoidable. It is impossible in the contemporary arts scene to go without aesthetic, or to go without style. It may seem like an ugly notion, but Music is only about music half of the time. The other half is, always has been, and always will be about image.

This leaves artists with a choice. They can either reject the idea wholesale and wage war against modern “consumerism” or “materialism” or “elitism” or whatever other “-isms” they believe are to blame for the situation, or they can embrace the state of the artistic landscape and use the intersectionality of it all to their advantage. This puts the modern experimental and underground scene in a uniquely influential position. Now, more than ever, as rock steps backward out of the limelight and into relative obscurity, young, independent artists will bear the burden of forging ahead and finding new ground upon which to innovate.

This desire for innovation and progress is nothing new – nearly all of the great acts of the past fifty years rejected the teachings of those that came before them to some degree, from the early days of punk in the seventies to the electronic and dance music influence of new wave in the eighties, to the rise of grunge in the nineties. On the eve of the twenty twenties, however, those ideals lack real representation on many levels of the industry. Most top forty rock bands are nearly indistinguishable from their pop contemporaries, embracing sonic tropes and trends to the point that the “Rock” label becomes meaningless and unnecessary beyond marketing certain artists to certain demographics. 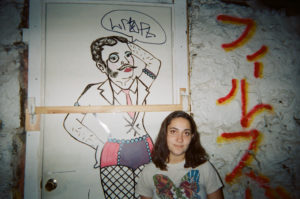 In this way, it was really uniformity that killed rock n roll. Things have always been changing, but it just couldn’t keep up anymore. Independent and underground scenes, then, will be the ones to keep innovation alive in the years to come, and fashion is crucial to making that innovation possible.

Many see local music scenes as being largely homogenous, centered around tradition, or still rooted in the punk values of the Seventies and Eighties.  This is only really accurate to an extent. When it comes to those who make up these scenes, the level of diversity is much more real than advertised.

Elise Roach, of essential Boston booking organization Artificial Contact, notes that while there is a definite “DIY vibe” many show-goers align with, that style ranges a great deal, from “mainstream trends and bright colors” to “docs and Carhartt beanies” to “thrifted stuff and oversized coats.” Where once the many factions of music culture were separated and the boundaries between them heavily policed, now it just depends what night you show up to your local venue.

Ruby Schwat of 98 Art Collective  (a Boston arts and music organization that puts on shows, hosts exhibitions, and displays original work) also argued for the significance of diversity in independent music, pointing out that, in her experience, “no one is really sure what music will be playing when they go so there’s not a huge fashion divide.” Punk, pop, rap, rock, and everything else in between coexist in such a way that, while genre labels still hold some significance, the differences between them no longer force people out of artistic spaces. This, as Ruby points out, encourages “a really strong sense of personal style” among those that frequent shows, the various sonic and visual aesthetics sort of blending together into one open space. 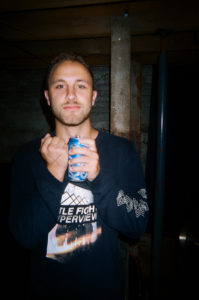 This openness extends to the fashion world as well, as old notions of exclusivity and elitism are now giving way to the rise of independent designers, increased representation of marginalized peoples, and entirely new ideas about clothing: What it can be, and what it’s used for. High fashion and luxury wear circles, once thought impenetrable without formal training and a good deal of money, are now increasingly pulling from- if not relying on- the creative innovation of young, marginalized artists. Some of those young, marginalized artists now, in fact, hold leadership positions at several of the most influential and well known fashion houses in the world. That representation then feeds back into the artistic community and gives people the power to redefine what style symbolizes.

In this sense, the relationship between fashion, personal style, and underground music is now more important and influential than ever. That many young musicians wholeheartedly embrace this relationship where their artistic progenitors rejected it shows how much power there still is in independent art, even if the old labels, definitions, or values attached to it have to die in order for creative expression to survive.

In a city with absurdly high rental costs, why do we still accept the broker's fee? And what happens if we don't?

There’s Paint Everywhere!: A Deep Dive into Artists in the Worcester Area, pt.1