“I wanna lose control for about 15 minutes, ha! 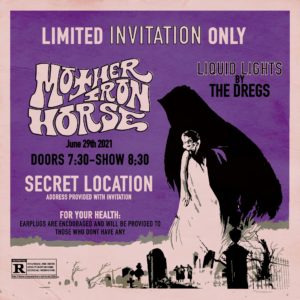 Marco waved me over as I was leaving the Lucky Dog bathroom.

“Hey brother, I got something for you.”

What Marco had for me was an invite to a show in a secret location on June 29th. “It’ll be 30-something people packed into a workspace in a mill, brother.” For most of us, it will be the first live music we’ve seen since 2019.

June 29th was the hottest day of the year, reaching over 100 degrees at times. I was already a sweaty mess before I found the door to the venue (“all the way at the end, just look for the blacklight,” is how lead singer Adam Luca directed me). Inside, we had no windows or AC, just several large fans. On the floor are three coolers containing ice water and Gatorade. Several other beer coolers were scattered about. In the corner, a man by the name of “The Dregs” was setting up a liquid light display. In the air, constant weed smoke. It is exactly what I expected when I heard “metal show in a workshop.” 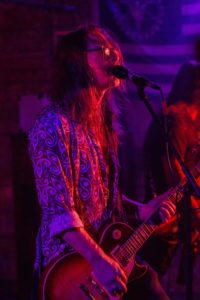 Marco got the crowd’s attention and said “If you gotta pee, go pee now. If you need to faint, go over there, have some ice water or something. Once we lock the doors, there’s no reentry.” I was reminded of the time I went to the planetarium as a kid and the loud voice over the speakers said I wouldn’t be able to come back in when I left, and I had a full blown panic attack. What if I have to use the bathroom? What if I get sick? What an evil thing to do to someone! But what else could they do with a show they’re not even sure they’re really supposed to be doing? 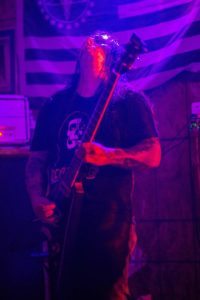 Mother Iron Horse is the type of scuzzy, occult-themed band you would expect from their name and 60-70s horror film imagery. There’s a wide array of influences: Iggy Pop, Sabbath, Deep Purple, Motorhead, High on Fire. But they remain approachable in spite of this. There’s still melody to their music. Riffs are often catchy, not “Sleep album length.” Vocals are intense, but not indecipherable. The drum and bass aren’t afraid to get groovy. Everything is there for a reason. It’s metal with a purpose. 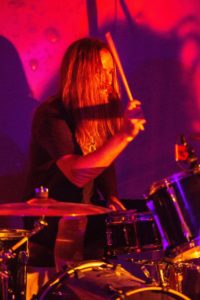 Most of the time I go to a concert, the music is kind of secondary. I’m searching for that feeling that comes when my body is vibrating from the bass, and my head is ringing, and I feel nothing but music. The drumbeat becomes my heartbeat. I lose control; I’m not there. It doesn’t happen at every show; I would say it probably becomes less and less common the more and more I do this. 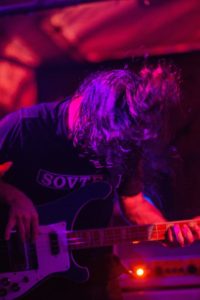 The feeling hit me about halfway through the set. I was looking at the guy next to me in a bandana and kilt. He had his leg up on a beer cooler, Captain Morgan-style. Whenever someone would go over there looking for a beer, he would open it up for them, reach in, and grab a cold one for whoever needed it. What a strange, beautiful, helpful angel. The patron saint of High Life. This put a huge smile on my face and I turned my attention back to the music. Hard to say if they were transitioning between songs or just playing an especially interesting long one, but whatever it was, I was nodding my head harder than usual. I started staring at the liquid light show, thinking it would probably bring me to that place. It did. I transcended, and inside these patterns I saw the shapes and shadows of many things, including (but not limited to): ducks, fish eating each other, dogs and moose but in shadow puppet form, the mask of former WWE superstar and now mayor of Knox County, Tennessee, Glenn “Kane” Jacobs.

Of course, this scared the shit out of me. It’s a lot to handle, and I had not experienced it in a while. I searched for something to ground myself with. Is there a certain instrument I can focus on? I hear a familiar riff and search deep within to figure out why it’s resonating with me. It’s that song that plays during that cutscene in Punch-Out! where Mac is training with the coach, running behind him in a pink sweatshirt. Holy shit. I stood there with a giant grin and the next thing I knew, the show was over.

When the show ended, I was led to the bathroom by the Saint of all High Life. He said he didn’t want “any rabbits getting lost down the rabbit hole” and made sure I got to the urinal safely. We talked about the Middle East in Cambridge as I took what may have been the longest piss of my life.

Liked it? Take a second to support Robert Mackenrodt on Patreon!