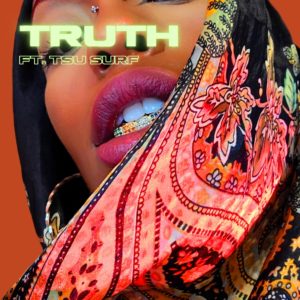 Over the past few months, prolific Boston/Brockton artist MonaVeli has honed in on her diverse skillset-from fierce singer, to expressive rapper, to vibrant director, precise writer-so on and so forth. Her mid-summer track “Wants and Needs” was a natural foray into melody rap sleekness, and the lavish music video reflects her incandescent energy.

MonaVeli continues her impassioned streak with an anthemic new single, “TRUTH,” produced by Humbeats, The track, which was released about three weeks ago, features battle rap wizard Tsu Surf. Both artists are exclamatory in their writing and presence, blocking any inkling of a counterfeit poser, while affirming their own beliefs around being authentic and loving oneself. “They gon’ tell you that they love you/they gon’ lie to you too/figure out which one the truth,” MonaVeli confidently croons. A few lines later, she asserts her own unabashed truth-“I still got love in me too.”

“It’s really about pushing yourself and being your own motivation, your own biggest fan-regardless of what’s up against you,” MonaVeli told Boston Hassle, when speaking on the song’s meaning. “You have to make sure you’re good before you try and give any parts of yourself out.”

Tsu Surf balances the track with personal tidbits and attacks the beat with a self-assured ferocity-“Trap kid/grandma called me just to make sure I ain’t back slid/product of my home environment, look what this trap did.” According to MonaVeli, the Boston mainstay DJ WhySham hosted the studio space for the track, as well.

“It was a really genuine vibe when he came to the studio,” said MonaVeli, regarding the collaboration with Surf. “He really came in, sat down, and wrote a whole verse right their on their spot. It was great vibes.”

Beyond just the music, MonaVeli is also a creative director and has her own Marketing & Media Production Company called K.WESTUDIOS that she continues to push. She directs and styles all of her own music videos and loves how people are always engaged in her art. “I’m never really aiming for anything, other then to make the listener feel something,” she told Boston Hassle.

Listen to “TRUTH” below.