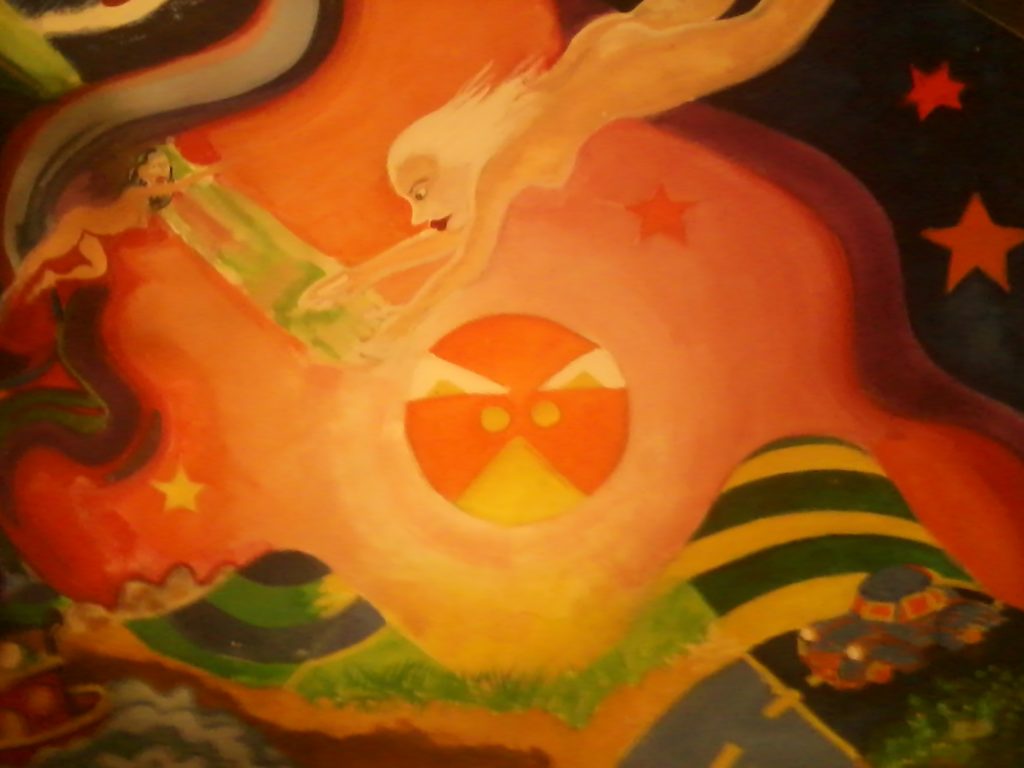 Father Alexander tells the tale of his great journey, in the distant past, to see the Old Man perform in the boonies. Being a transcript of events.

Last time we saw the Old Man Alice introduced us to him. He gave me a wary, spaced out, look. This was at a church in Sommerville. The Old Man just walked past me as I wrote that. The whole place went mute. Pathetic.

K bought me a rare ‘gansett. “Gotta support the sponsor.” Anyway, when we were introduced to the Old Man the cat looked at me like a son expecting child support. I felt guilty.

About 8 years later. He stands behind me now. I don’t need to bum him out with news of Alice’s passing.

The crowd is young. Not necessarily surprising, but it is interesting. Who cares… Oh, that’s why.

Standing outside I mourned the weird conversations:

“I talked with him yesterday. He said ‘Dude’ or ‘Man’ every other sentence & talked about entrepreneurship and opening breweries.” The young woman had a weird voice.
“Yuck. That sounds AWFUL.” Her companion replied.

Sometimes youth is an undesirable thing. Here I am a bank robber living underground and I am forced to wait in a line next to square hipsters. Back in my day it meant something. I digress. Hotdogs from the bar are on the way & the sponsor is going flat.

“Have moicy!” I nearly have a heart attack.

The place is filling up.

In Your Ear, Allston; A Long time ago.

Alby & Reed are special allies. I was looking in the cheap-o ‘classical’ section – the only section that matters – and stumbled across Leadbelly’s Last Sessions Vol. 1, 2, & 3. Clearly stashed for later purchase by a special someone.

Imagining their thought process: “Anyone that would even bothering looking for classical music probably hasn’t even heard of Leadbelly…” Ha!

To Reed : “I feel guilty buying these…”
“Finders keepers.”
“Righteous.”

The collection appeared to be recorded in one night at an apartment. Leadbelly gets wasted over the course of the night and scolds the woman singing harmony mercilessly. Relevant because K keeps bringing the sponsor to me (& hotdogs to prevent such a time loop) and also because the Old Man’s first sessions were recorded on the same reel-to-reel Alan Lomax used that night in the apartment. One of the reasons I got the records that day.

A note on the opening artist Daron Hanlon: I didn’t like the song “Lapsed Catholic” for obvious reasons. I did, however, like the line “head sculpted by pillow” from another song for equally obvious reasons. Mr. Hanlon is very funny and has a good memory. At one point point he asked a woman to come up on stage to sing harmony. She looked drugged and reluctant. It worked out, though.

The concert went well. I don’t go to performances often. The wait and conversations before we got inside almost did me in. I nearly blew my cover to express my outrage, but kept cool. . The crowd was larger than the last time I saw the Old Man, and I am pleased with this. It makes sense, but I was reminded of the notion quality over quantity. A lot of love was shared, so I have no idea what I’m talking about.

When we left the Root Cellar that night it was unimaginably foggy. Eerie. Eerie. Eerie. The hour and a half drive on strange roads back to Worcester was terrifying and almost resulted in our death. And no one else was on the road.

I first heard “The Revenant” waking up one morning in Little Compton, Rhode Island which is where Alice lived. She had a large record collection. I subsequently turned all my friends on to some of them: “O Bumboklaat” by Peter Tosh and Michael Hurley’s “The Slurf Song” from the album Have Moicy! We probably listened to both a few hundred times.

I later had a major falling out with these degenerate gambling friends shortly thereafter.

Being a collector of records I had maybe 200 records like Trout Mask Replica, about a dozen of the Old Man’s records, Generic Flipper, everything by the Grateful Dead, the Bullshit Detector compilations, Metallic KO a Stooges bootleg, the Leadbelly records I described above and all these old, rare to me, punk & jazz records. Then, another 600 “dross” records; Beatles, Stones, Foghat, Boston, etc. Things you can find anywhere, but things people love.

Me and the degenerate friends would hustle things at flea markets and I would bring records. I’d take 9 or 11 of the choice records along with about 40 dross records every week to the market. The choice were put in to attract attention, mostly, and would have rip-off prices of $30 which no one would ever go for. The dross were $2-5. I made a good living for a while never having to sacrifice much. A Stooges record here or a MC5 or Ramones record there every so often. The customer would walk away with a shit eating grin thinking I had no idea what I just sold for $10.

Anyway, one week I wasn’t able to make it to the market and a friend brought my records because the records always attracted attention. I wasn’t able to ‘curate’ that week so it was the crate we pulled from in the midst of our degenerate activities which had maybe 20-30 of the choice records. When I came back later that day the crate was full. Except all 20 or 30 of the choice records were gone.

I learned a valuable lesson that day: Only buy cheap classical records because no one wants them. That, or incredibly occult pop from the ’50s. Learn to love Bobby Vinton.

My reason for telling this incredibly long and detailed story is it is why I went into several years of solitude. It was a major blow to my psyche, and I felt disgusting selling my soul for $30. I needed to depart from degeneracy. One by one I lost touch with my circle of accomplices. But, my last interaction with the ringleader came maybe 3 years after the event described above and my isolation. It was a photo in front of a bar somewhere in Boston. There was a sign.