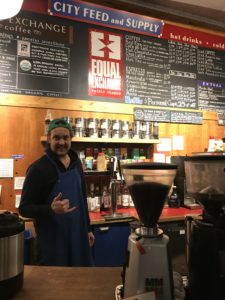 Nathan Moore has been working with beans for a long time.  Before coming to JP, he worked at Equal Exchange near North Station until its closure a few months ago.  Nowadays, you can find him slingin’ joe at City Feed and Supply, Centre St’s adorable lil gem of an organic market.  Stop by and say hi, order some coffee hot or iced (if you’re true blue), and take a look around the place sometime.  Any coffee joint in Boston can say they have the best cup in the city, but only one can be right.  It’s up for you to decide.

Boston Hassle: What’s the best cup of coffee you’ve ever had?  Where were you when you had it?

Nathan Moore: There’s nothing better than getting a cup of hot coffee served to you in a mug at a diner or brunch place. The coffee isn’t always necessarily the best quality but the experience is always a beautiful one. As far as the best cup of coffee I’ve ever had I confess is a 24 oz. cup of Equal Exchange trademarked cold brew. I remember one time in particular cruising into the old cafe on Causeway Street on my skateboard and sucking down a large cold brew on a hot summer day. That was quite fantastic.

BH: Tell me about equal exchange— what’s their mission?

NM: In simple terms Equal Exchange is a company started in 1986 with the intention of bringing organic coffee to the masses while simultaneously supporting the small farmers who produced it by paying them more adequately. Equal Exchange has since expanded its offerings to include tea, chocolate and more. It is crucial to have companies like Equal Exchange in the world today who use ethical business practices and also strive to educate the public at the same time.

BH: What’s the best neighborhood in Boston to be a barista and why?

NM: The best neighborhood to be a barista in is certainly Jamaica Plain. I first moved to JP in 1995, from Cape Cod. There’s a great “neighborhood” feel here that isn’t as prevalent in some of the other communities here in Boston. I have been living in the city for twenty plus years but I think I’ll always be a small town boy at heart. Jamaica Plain feels like a small town on the edge of the city.

BH: If you could add one fantastical thing to the City Feed coffee menu, what would it be?

NM: I would like to add the “cortado” to the City Feed menu. These days the hip thing on coffee menus is the “flat white”. For some reason that never really spoke to me. I realize that there are going to be many variations of the same coffee drinks, depending on where you go. The cortado we served at our last cafe was a five or six ounce latte with two shots of espresso instead of one. Strong, smooth and simple.

BH: Which term describes you better: “mellow and nuanced” or “full-bodied aroma?”

NM: I would say the term “mellow and nuanced” probably best describes me.

City Feed and Supply is the official Coffee Sponsor of Boston Hassle Flea Market. Remember to stop by City Feed for all your organic groceries and coffee desires, and don’t miss the Boston Hassle Flea, Saturday December 7th @ the Elks Lodge in Cambridge from 12pm-6pm.