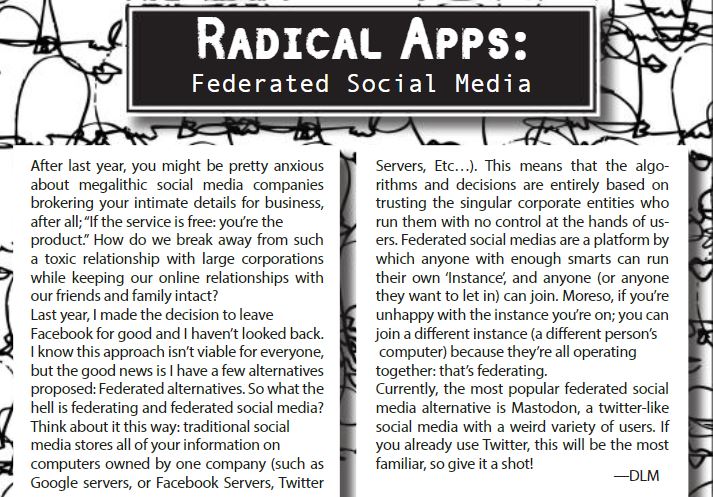 After last year, you might be pretty anxious about megalithic social media companies brokering your intimate details for business, after all; “If the service is free: you’re the product.” How do we break away from such a toxic relationship with large corporations while keeping our online relationships with our friends and family intact?

Last year, I made the decision to leave Facebook for good and I haven’t looked back. I know this approach isn’t viable for everyone, but the good news is I have a few alternatives proposed: Federated alternatives. So what the hell is federating and federated social media? Think about it this way: traditional social media stores all of your information on computers owned by one company (such as Google servers, or Facebook Servers, Twitter Servers, Etc…). This means that the algorithms and decisions are entirely based on trusting the singular corporate entities who run them with no control at the hands of user. Federated social medias are a platform by which anyone with enough smarts can run their own ‘Instance’, and anyone (or anyone they want to let in) can join. Moreso, if you’re unhappy with the instance you’re on; you can join a different instance (a different person’s computer) because they’re all operating together: that’s federating.

Currently, the most popular federated social media alternative is Mastodon, a twitter-like social media with a weird variety of users. If you already use Twitter, this will be the most familiar, so give it a shot!

This Week In Experimental 74

Hello Experimenters! Just heads up that there will be no newsletter next week. I’m taking the whole week off for The Big…