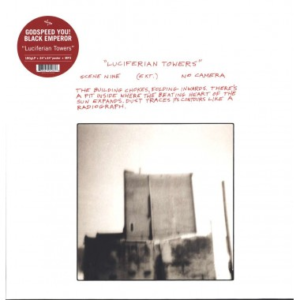 If you were thinking that this was going to be a descent to hell, you’re wrong.

I want to see Luciferian Towers as a play of three acts with an interlude in between. Perhaps a modern and a leftist’s equivalent to kitchen sink realism; one where everyone is angry at the state of affairs in our modern day society. Godspeed You! Black Emperor, the band of anti-capitalists from Canada have a list of demands on behalf of the world and they are conveying it without using a single word.

Revolutionary opener Undoing a Luciferian Towers is unlike any Godspeed I’ve heard. The fluctuation of musical notes and their density is mesmerizing. The only thing that’s reminiscent of older Godspeed albums through the entirety of the album is the ambience and heavy drones that always pushed the boundaries of music (which is what post-rock always does). There’s not a single moment that instruments neglected to utilize; the soundscape is aurally occupied in ways that might not attract all Godspeed’s fans, but it gives off a new atmosphere that I really love. If you listen carefully you can hear everything: from the guitars and drums to the trumpet and sax. Think of it as a coalescence of rock and free jazz.

The first time I listened to “Bosses Hang,” I was deceived by the refrain of violins and slow guitars but it crescendos and loops beautifully and powerfully further into the track. It sounds very celebratory and empowering if you come to the album with the band’s revolutionary intent in your mind. It somehow gives hope. “Fam/Famine,” which is the interlude before the final act, is a beautiful atmospheric melody ushering us to a new world.

Lastly, “Anthem for no State,” which is the most beautiful anarchist dream put in music. It is, really, one of the most beautiful compositions Godspeed had put out since they reunited and produced this album. It is the rebuilding of the world as we want, the world that so far only changed in “Bosses Hang.” It feels very elegiac as it begins, perhaps that’s a thank you for the names we’ve lost for justice; and this year, perhaps even more painfully the last, we’ve lost so many lives. As we get deeper into it, there’s that raging call again. As if we’re being told to not forget that the fight isn’t over until the change is no longer a dream but a reality.

This track has made me realize once again how timeless Godspeed You! Black Emperor is.