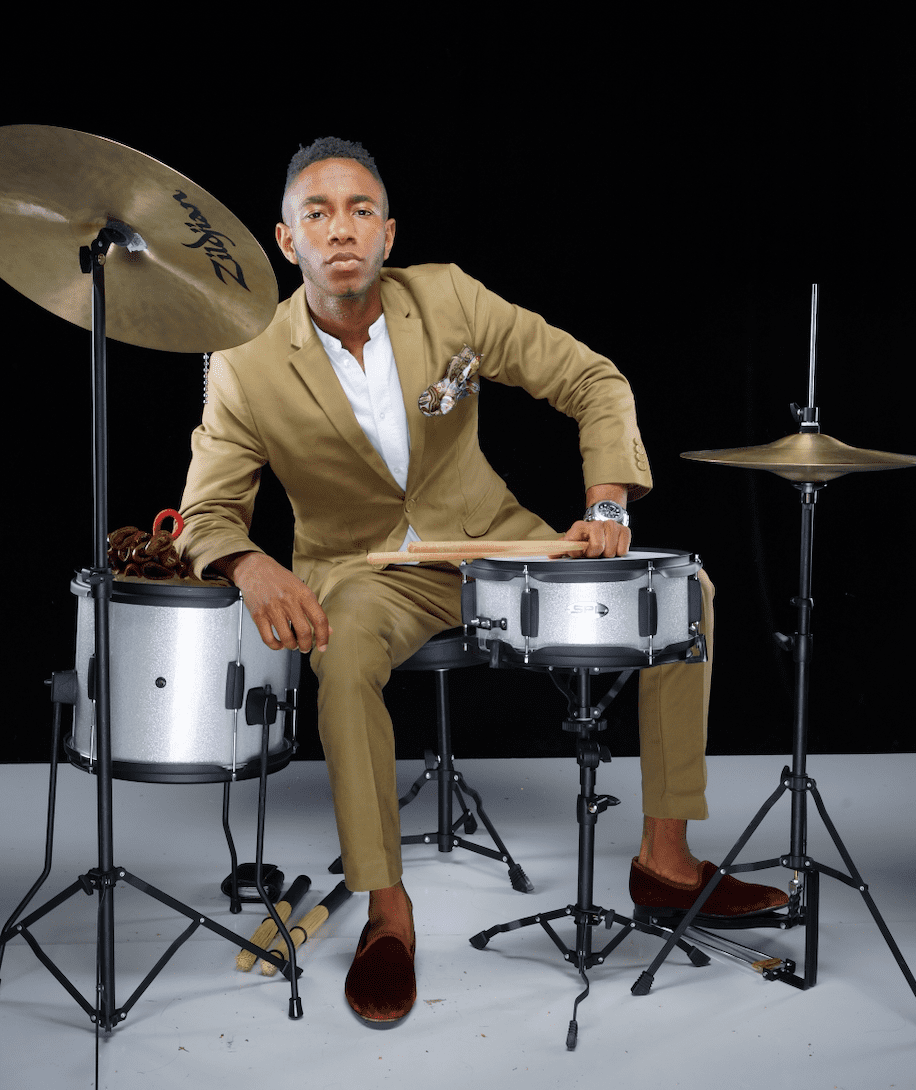 I knew that this recording would be something special as soon as Jackson explained what the performance was all about: the anchoring concept of love, remaining powerful despite whatever difficulties this life sends towards us.

We should all be exceptionally grateful that Mandorla Music, a Boston-area 501 ©(3) nonprofit jazz organization, commissioned this recording. Jackson himself is a graduate of Berklee’s Global Jazz Institute, and regularly plays around Boston and the East Coast with fellow talented musicians such as Joey Alexander and Anastassiya Petrova. Accompanying drummer Jackson in this particular performance are Jesse Taitt, a Berklee professor and community activist with AmeriCorp and Public Allies, on the keyboard, as well as Max Ridley, another Berklee Global Jazz graduate and Boston-area artist-educator, on bass. Both Ridley and Taitt are alumni of the Boston Arts Academy, Boston’s only high school for the visual and performing arts.

The first track on the recording, “Anxiety,” composed by Jackson, is a wonderfully triumphant stance on an all too familiar feeling that plagues most of our lives as humans. As listeners, we all come from different places in regards to facing our anxieties. The common thread between all of us that this song highlights so masterfully, is the catharsis that comes from examining and fighting against the things our minds tell us to think. While the battle can be exceptionally difficult, the refreshing feeling that comes with a changed perspective is a beautiful one. Ridley’s bass playing is a shining example of this stark contrast. Following his wonderfully melodic solo, the closing callback Ridley performs to the song’s initial bassline is a reflective way to top off Jackson’s statement on anxiety.

Black American Music’s importance to contemporary culture cannot be understated. Nearly every style of popular music has DNA tracing back to the lineage of jazz — whether it be hip hop, electronic dance music or anything in between. Both social justice endeavors and a devotion to faith have been a fundamental part of building so much of the music that we love today — themes of which are especially prominent within Jackson’s music.

The song “Security,” initially titled “Unarmed Arbery,” demonstrates both aforementioned hallmark aspects of jazz. The track features a menacing bassline, and samples of audio containing clips of people regarding the good character of Ahmaud Arbery, a Black man that was murdered in February of 2020 for simply going on a jog. Taitt’s keyboard playing is a standout on this song. While the musician typically plays with a very delicate touch, Taitt assumes a more aggressive tone when he takes his solo. The anger and sadness heard in his playing on this track pairs well with the words that examine how truly backwards and unfair the world can be. Music like Jackson’s proves that the medium serves and will continue to serve as inspiration for positive change.

The following track, “Faith,” puts Jackson’s roots as a church musician on display. Religious or not, you would have to try extremely hard to not be moved by the stunning chord progression of this song. Jackson’s ethereal drumming soars over the arrangement of instruments in this track. Included within “Faith” is an excerpt of a sermon that explains why it is important to serve God if you expect Him to deliver answers to you. The song closes with the quote: “Miracles begin with a relationship.” This lesson is something for everyone to think about when it comes to our relationships with loved ones — the best things happen to those who are selfless and give to others when able.

Delving more deeply into the jazz idiom is Taitt’s composition “Ginger.” The opening piano line and the progressions of the song are exhilarating to listen to. In case you wondered if this band could swing, this song will quickly prove any worries wrong. The interconnectedness of this trio’s dynamic is reminiscent of the great masters of jazz.

It is more than abundantly clear that these musicians are listening to one another on a truly deep level. The Tyson D. Jackson trio has something special, and is clearly in touch with something larger than life.

To close out the set, listeners hear hear bassist Ridley’s call to God in his composition “Yell-o,” followed by Taitt’s own arrangement of the Beatles’ classic tune “Blackbird.” While COVID restrictions had Ridley dealing with a mask that tried its hardest to obstruct his playing, he still did an outstanding job holding down both the vocals and the bass line — A true Renaissance man!

Compositionally, “Yell-o” is spirited and uplifting, a track that was clearly thought out very effectively, with a brilliant upward motion. Taitt’s arrangement of “Blackbird” is something truly special — I will admit that “Blackbird” is one of my favorite songs, so I went into listening with a positive bias. I say this with as much objectivity that I can muster: it was perfect. The recording now joins a long lineage of interpretations of the Beatles classic, and holds its own up against the best. Another powerful Ridley bass solo richly glues the song together, Taitt drips magic onto silence with his keyboard, and bandleader Tyson D. Jackson spearheads this group with a strength that is clearly going to take him places further than he’s already gone.

And thus, I have a feeling the world will be seeing a lot more of Tyson D. Jackson as the years go by.