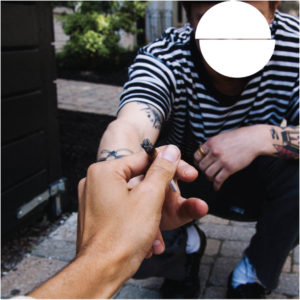 I’ve been exchanging emails with Zero of Wintermute Cannabis Collective, based in VT with ties all across New England.  You, dear reader, may remember their CBD joints and oils from our December Black Market.  However, there’s a lot more to the operation than just traveling to local craft fairs and making sure cannabis is adequately distributed to the masses.

WCC has embarked on a 3d-printing project that grew out of the necessity for a joint-rolling machine.  After it was designed and printed, the team grew an interest in polyactic acid (PLA) plastics – completely biodegradable, made from corn syrup, and available for purchase in case form in a lovely bubblegum pink.  The PLA plastic features in Wintermute’s product design and packaging, and they also offer 3d printing consultation on their site.

It may now share its moniker with an Earth-friendly 3D-printing program, but the guiding principles behind both WCC’s major projects is clear:  Both are ecologically-conscious, from-the-earth, for the people, and local to New England. (Plus a heaping helping of cyberpunk values.)

As the “weed industry” begins to percolate in New England and the West Coast, industriousness, ingenuity, and environmentally-conscious attitudes rule the day.  To me, WCC exhibited all three, as well as a hint of what’s to come in the way of cannabis startups across New England.

Take it away, Zero:

Roughly how many people are there in the Collective?

A completely accurate answer to that question is actually above my pay grade. The MOO generally has between 15 – 20 users online at any given time, with total user accounts ranging to nearly one hundred. Not all MOO users actively participate in growing, processing, packaging, or collaborating with the Wintermute brand directly, but many, perhaps most, do in some capacity.

The day of legal weed has dawned in VT and MA.  What are you excited about? What’s concerning?

I was lucky enough to spend election night 2016 trimming weed on a cannabis farm in California; both the night Donald Trump was elected president of the United States and the night cannabis was legalized in the state of California. I expected the hardened blackmarket growers I was bunking with to be excited about legalization, but the opposite was true. These wildmen spend months alone, hours from anyone, growing cannabis in secret, and legalization would allow them to return to civilization.  That’s a good thing right?

All it meant to them was a drop in the price of flower, and their being forced to deal with a bunch of yuppie green-rushers. That is a broadly common stance on the shift towards legalization, at least within the black market. Where I, and the Wintermute collective, come down on the matter is slightly more nuanced. There are seriously disruptive financial and cultural forces at work in the shift from black to white market cannabis that threaten to throw out baby with the bathwater. Wintermute’s goal is to preserve what was interesting and authentic within cannabis, while helping it to successfully navigate the transition to the right side of the twenty first century with a dash of cyberpunk ingenuity; a bit of that high tech low life.

What was the vision behind the 3d printing project?  Where do you see it going in the next few months to years?

Wintermute’s extensive use of 3D printing began as a matter of thrift, then of aesthetic. When we collectively decided to begin selling our hemp in the form of pre-rolls we discovered that rolling devices cost anywhere between $800 and $4,500; this was not acceptable to us. A member had experience with printers, so we purchased one, owned by the collective for $350. We modeled and printed our own rolling machine, the files for which are available to anyone who asks, but you do have to ask. Our initial design and print(s) have been serving us well for over a year now, making 42 pre-rolls at a run.

From there, as we were investigating packaging solutions we could not find plugs for test-tubes that were to our liking. Ordering custom injection molded pieces from China was prohibitively expensive, and they’d be shipped from China, so again we designed and printed our own.

We take the cyberpunk ethos of “High Tech Low Life” to heart in everything that we do, from the tube-tops of our joints, to our collective recruitment process via MOO.

Does Wintermute’s op extend beyond just CBD, in terms of either growing and selling?

What’s your personal favorite strain at the moment?

As far as CBD is concerned the largest scale grower in the collective just got some Willy G’s Lebanese that is incredibly promising. We’ll be doing a large scale pheno-hunt this summer, and we’re a little bit more than optimistic about it.

In terms of THC I was lucky enough to catch a bit of MAC that another grower in the collective had been gifted through the grapevine. For the uninitiated MAC is a legendary strain exclusively gifted to worthy members of the cannabis grow scene. It cannot be bought with money, only connections and love.  The genetics are a jealously guarded secret, and the single bowl I was lucky enough to smoke will remain a fond memory.

More about WCC at wintermute.online

There’s Paint Everywhere!: A Deep Dive into Artists in the Worcester Area, pt.1