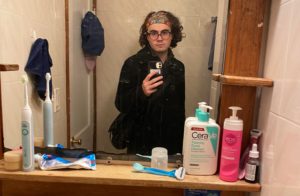 One of my—and, I’m sure, nearly everybody else’s—first thoughts, once quarantine began, was: Holy shit, there was so much. So much I didn’t notice, so much I never appreciated, so much I didn’t absorb. (I know, I know, this is a particularly bourgeois concern. But still. Bear with me.) In that way, much of quarantine has been spent taming the boredom and fear, shaping them back into “downtime” (y’know, implying there’s anything now like an “uptime”), in an attempt to cling to a sense of normalcy while still trying to cherish those minutiae I felt unable to have previously appreciated pre-COVID. In regard to death and boredom. Quarantine has, in many ways, been a reacquaintance with Small Moments: details one would never normally notice, which might have gone completely unappreciated our/my whole lives. The way a sheet is folded, a blemish on the wall, a pattern in the floorboards. And since music is my mainline, much of 2020 has been cataloguing the mini-mini-mini details in songs, neurotically pointing family and friends to half-second snippets of incredibly specific tracks. In that way, these song moments have become inextricable from certain moments, for me, from the past year. So here are ten moments from songs (and their related dates) that have meant a lot to me in 2020. Three are from this year, two are local, and two are both.

N.B.: Here, the first link is (if available) the YouTube version of the song from the beginning, and the second link is the same video but at the relevant timestamp, usually five or ten seconds behind the moment I’m mentioning.

It’s almost as if we knew this would happen. This track emerged for me—and, it seems, for most of my friends at school—right as the year opened up, things began to warm up a little, and COVID came on the horizon. “Ethereal Stepping” is at once ominous, dreamy, and celestial—literally just that, ethereal. Almost a caricaturization of what we dub the “before-times.” The song wryly paralleled the dark basements of a rural Minnesota winter, ignorant bliss and constant denial, especially at 1:03, when the track hits the apex of its beat and begins, in earnest, its relentless seven-minute drive.

In early March, I was at my college in southern Minnesota—coincidentally, just down the road from Fog/Andrew Broder’s native Minneapolis. There was talk of quarantine, mass government shutdown, and looming burrowing. Where “Ethereal Stepping” remained cynically euphoric, biting yet hopeful, “Pneumonia” was, at the time, to me, the one last gasp for air, a throwing-up of the hands, a maybe this actually was as bad as we thought. A mania seemed to grip the country, ever-antsy yet immovably lazy: “Is it depression or disease? / Tell it to the millipedes,” Broder crones on the track, “welcome to the worst part of your life.” In many ways that part of the year felt surreal, not necessarily because it was unprecedented in recent memory (it was), but because, as I’d said in the beginning: there was so much. Early March was the groaning shadow, the adrenaline-filled anticipation, the fear, not so much of what was to come, but what would be lost and forgotten. “I’m hard to fix because / it took me so goddamn long / To figure out that I broke down.”

A fitting song for an era of increasing separation coupled with uncomfortable closeness: The whole track (but, in particular, this snippet) glimmers with the melancholic, ignorant bliss immediately preceding the pandemic. This track came out only ten days before COVID fully hit the U.S., and on March 12, when everything came crashing down, this track felt both refreshingly new yet nostalgically distant.

I mean, it’s self-explanatory, I guess. About a month into the pandemic and, no, it doesn’t seem like it’ll all be over by Easter, despite presidential smoke blown to the contrary. This might’ve been the depth of my cynicism—or at least its bluntest and least filtered appearance, unmitigated horror. Traditional song structure felt cliché, useless; I couldn’t write more than couplings of sentence fragments at a time. It seemed we were experiencing Desolation’s Plan firsthand; Coma Cinema, here, felt of particular relevance, dooming and hopeless yet not abjectly without hope. Why even make music, then, if things are as bleak as intimated? This was a recurring question for me. “Your tiny hands don’t understand / Desolation’s plan / Unnatural feelings fill this room / To take the natural part of you.” And that synth arpeggio that enters at 0:50 seemed to venture into that escapist, ethereal, minutiaeistic realm I sought so desperately in early April (and, honestly, throughout much of the rest of the pandemic).

A fitting sequel to the last entry. Further venture down the road of decaying song structures, raw, untapped emotion, distressing honesty. Felt nothing if not appropriate for the time, like listening to Gil Mellé’s Andromeda Strain or the middle third of “Autobahn” on an empty stomach. Or maybe something Musci made. One of the comments on the YouTube video pretty much hit the mark: “I dunno how but somehow this is the perfect song for both a nervous breakdown and an unapologetic rave.” And at 1:17 the global lazy restlessness takes full hold. Living in the process of dying.

At this point I remember being solidly in the time which had been endlessly marketed as The Time We’d Be Out of It. The weather was warming, the first spike (which we’d then thought of as the Only Spike) seemed conquered, things felt under control, summer was approaching. I’d played this album incessantly during the spring, but on and around May 1, it had been “Poor Places” season. This looks, retrospectively, like the perfect solution to the last  two songs: emerging from a monotonous dissonance into hope and warmth, the floor tom at 1:53 the breaking of the ice, literally and figuratively, the rediscovery of narrative, endings, progress, and a productive nostalgia. (Does such a thing exist?) This track, at the time, seemed to open me back up, tune me back into noticing the beautiful minutiae, and catalogue, catalogue, catalogue.

Yawning summer, miserable peak. Along with early Built to Spill, this part of the year found me obsessed with long and multi-part songs. I’m talking “Untrustable,” “Lo Boob Oscillator,” “Echo, Bravo”. (06/20  was, after all, the longest day of the year.) “Hot Dog Water” hit the spot, a (seemingly) one-off 2019 cut by the emerging Chicago indie outfit Winter Beach. Just as with “Poor Places,” 1:22 offered a sense of constructive warmth, a song-world in its own, to converse with.

Lull, lull, lull. Melaina Kol’s whispercore folk (is that a genre?) felt appropriate for the end of the adrenalinic energy from the beginning of the pandemic into the beginning of the slump, the meat of the tunnel, that point one might dub “no return.” Specifically the tempo change at 1:38—the track’s whole thesis changes, boredom rearticulated, quiet moments given newer readings. It’s fitting that much of Melaina Kol’s music was written when he was up late at night unable to sleep. “Stride” is both the contextual and stylistic embodiment of those sorts of lost moments. Which, of course, seemed to be the theme of the pandemic.

(This one’s on Bandcamp so (I think) I can’t hyperlink the timestamp. Sowwie…)

What a great album and what a killer track to end the year with. (Er, kinda. I think in October most people seemed to hope/assume the year was pretty much over already. That it wasn’t.) Driving beat, swirling acoustics, serene vocals. An exciting and endearing reminder that despite the temporary death of Boston live music, its ever-enduring spirit lives on in beautiful digital spectres.

It just keeps going. We are entering the cold, the eternal slump, from which we may never return. “We are stranded, cold, in the middle of an endless plain, on the edge of rotted dreams, faced with the grim responsibility of choosing increasingly binary ends to foggy means, licking filthy bottoms of pharmacy dumpsters for a rush, the coroner the barber sweeping away parts of you and time and now-matted excitements, ice-cold cheekbone cliffs spilling onto grimaces of pockmarked pubescent pain, languorous murmurs oozing into champagne-drowned purple summer evening skies, anticipatory tingles in the stomach setting out on each journey at the start of the year, blood and tears but not much sweat on dresses in an ambulance and sirens too loud for the neighbors for this goddamn late on a Tuesday night, a succession of infinitesimal steps toward the edge of an overpass near your old high school as the sun rises and pierces the sky tangerine and magenta and the world finally begins to materialize and you see people starting to crowd around you looking at you talking about you trying to figure out the development of You.”

Liked it? Take a second to support N. Malte Collins on Patreon!