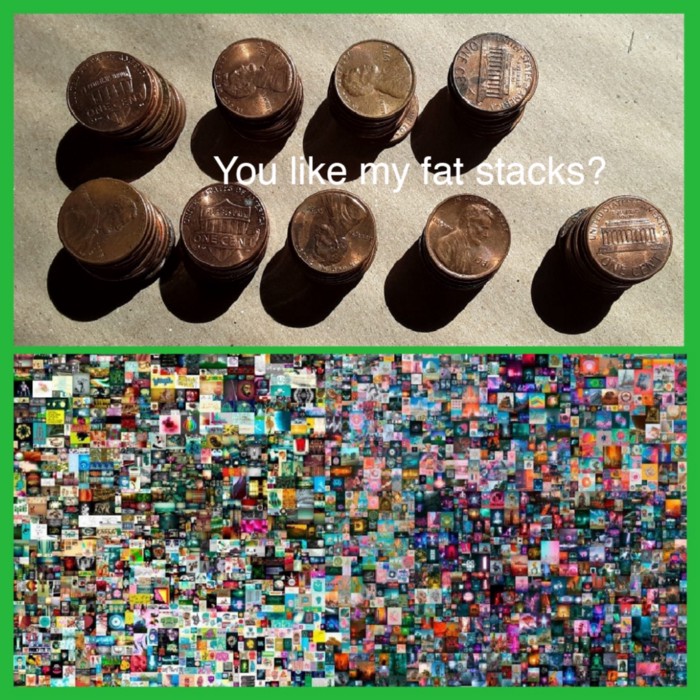 On March 11, 2021 art auction house Christie’s sold a digital-only artwork by the American artist known as Beeple, for a whopping $69.34 million dollars. That’s right, the .jpg file seen above is now the third most expensive work of art made by a living artist, right behind David Hockney’s Portrait of an Artist (Pool with Two Figures) sold for $90.3 mil and of course, Jeff Koons’ Rabbit for $91.1 mil. I’m not crying, you’re crying.
Now, if you happen to be involved in any kind of art-making process, (visual, written, performative), you’re probably poor and angry, like me. Here lies another example of cis-gendered, middle or upper-class, white guys finishing first, literally raking in the millions. This archetype tends to grow up in a fairly financially stable home with two parents, (some even successful artists themselves) and is able to attend, (and finish programs at) prestigious art colleges. They are often portrayed as “breaking the rules,” although clearly the rules were meant for them to break.

Now, not much is known about Beeple, other than a brief Wikipedia page and what seems like a performatively self-deprecating website, but we have this: His name is Mike Winklemann, he lives in Charleston, South Carolina with his wife and two children, graduated from Purdue with a computer science degree, and is super fucking rich. The artwork that made him so, entitled Everydays: the First 5,000 days, is a process-based work essentially meaning the primary focus/purpose of the art is how it is made and that it is made. The digital collage is comprised of individual illustrations he created and then posted online once a day since May 2007. Each illustration was meant to serve as a motivator for Winklemann to get better with his skills and to make something every day. His follow-through is commendable and his skills with digital drawing can not be denied.|

However, when he decided to compile these drawings together into one big collage, get Christie’s involved, get paid, and have the gall to denigrate that very same work while the majority of artists struggle to put food on the table — I need to point out the privilege in the room. There is so much unseen work in creating art that the public fails to acknowledge. I can’t even keep track of how many times I’ve been asked to make things for free, (and that’s fine, I’m more than happy to do it most of the time, but it should not be expected). This type of exclusionary razzle-dazzle doesn’t help artists trying to make a living nor does it help the public understand the emotional/financial costs that are involved in creating. There’s a partition here with a sign that says, “Art is for the rich and artists are dispensable.” There’s also a smaller one underneath that reading, “…and therefore anybody trying to pursue this career is wasting their time and money because art is for the few and they’ll more than likely just fail and take up space.” Inspiring to future artists, eh?

Now the buyer of this piece is some anonymous, cryptocurrency tycoon known only as Metakovan and has bought from Beeple before. What Metakovan plans to do with the works is, I admit, above my meager paygrade, but is supposedly world-changing. I do not know Metakovan’s background but if they have over $69.34 million worth of disposable income to spend on Everydays, I think we can safely assume they are in the elite and did not start from zero. And haven’t we heard the rich make promises to the world that they had no intention of keeping before?
Look, I’m not a total hater. I’m glad an artist got paid. I’m hopeful that Crypto art really will bring positive changes to the world. I also hope that Beeple, after taking care of himself and his family, uses his money for good. Maybe I’m naïve but I still believe that good rich people, that actually give a shit about the rest of us, could exist. Could being the operative word here. But for now, I’ll continue to count my pennies, primarily stick to mediums that can be made without being plugged in, and hope the 1% doesn’t dive us headfirst into a dystopian nightmare.

Sarah Samways is a mixed-race visual artist/writer who lives in Rhode Island. She has two guinea pigs named Tony and Maisey.
Check out her Medium, where this piece originally appeared

Exploring the Life and Works of French Impressionist Paul Cézanne

A look at "Paul Cézanne: Influence," on display at the MFA