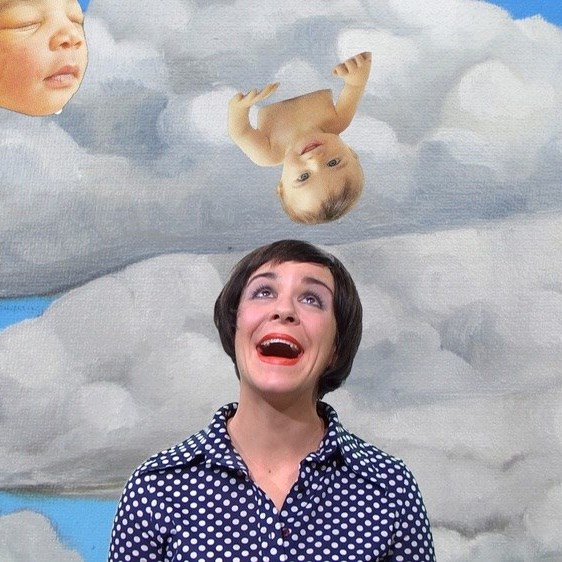 still from “Babystorm” by Tara Nelson

I met Tara Nelson about ten years ago when she and I were graduate and undergraduate students respectively. I don’t know how it is now—completely different, I’m sure— but ten years ago, the MassArt film department was a lively place brimming with passionate eccentrics who could spend hours talking about how light hits certain surfaces, among other things. It was a fun, difficult, dramatic place to be. Tara and I both thrived on this culture, partially as disciples, partially as annoyed and sardonic people eager to bring our own ideas to the table. Our similar brands of enthusiasm made us fast friends. I remember her time in Boston fondly. She has a contagious insistence on making things happen, forming connections, building community that would come to lie at the heart of her work as an artist, academic, and activist. 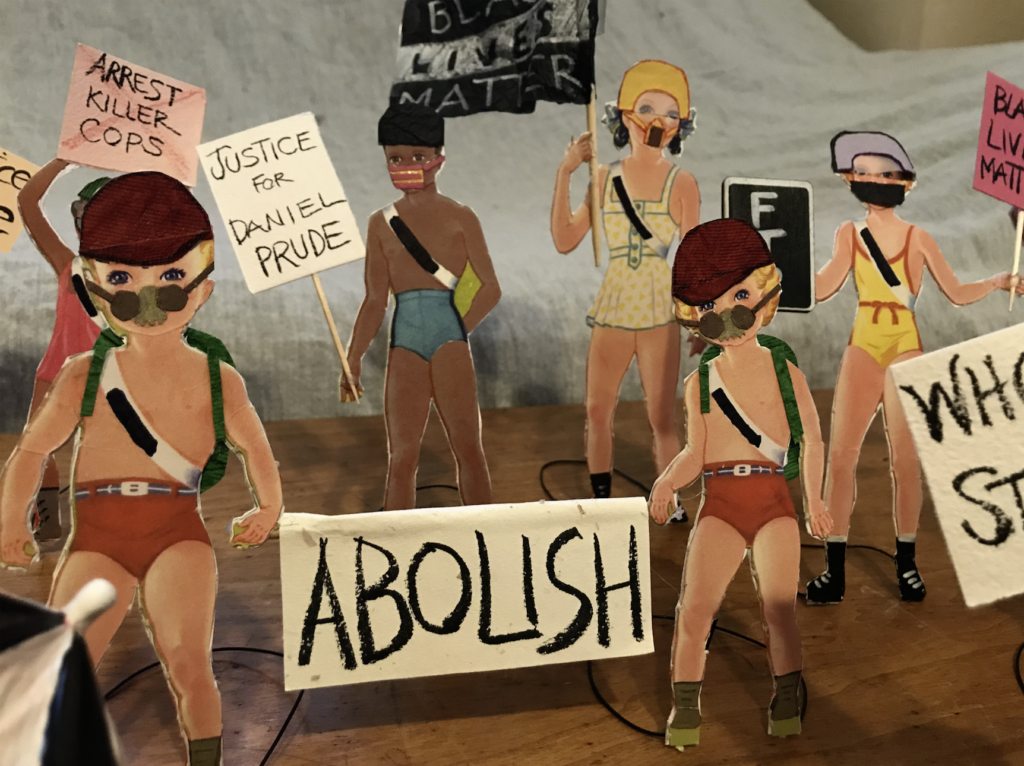 Tara found her calling as a media artist while living in Pittsburgh, where she got involved in the city’s experimental film scene and Pittsburgh Filmmakers, a cooperative educational media center that was open from 1971 to 2019. She met and married Gordon Nelson, filmmaker and one of the founders of a screening series for underground cinema called Jefferson Presents. She and Gordon, known collectively as “The Nelsons”, relocated from Pittsburgh to Boston in 2009 for her to attend graduate school at MassArt, where Gordon would also teach 16mm film production classes. Their roughly four years in Boston were marked by an undeniable presence and influence. When they weren’t programming their own D.I.Y. screenings at whatever available spaces they could find, they were projecting films for other people’s shows and helping other artists on their own projects.

Tara Nelson’s time in Boston resulted in an eclectic body of moving image work that included single-channel films and videos, expanded cinema performances, and subjecting audiences to unexpected live interventions. In 2014, she and Gordon moved to Rochester, New York for Gordon to study film archiving at The George Eastman House. Tara joined the faculty of the Visual Studies Workshop as a lecturer and Curator of The Moving Images Collection. It was in Rochester, where she continues to live, that her artistic career took an especially political turn. As keeper of VSW’s moving image archive, she realized how much historically significant media was just sitting there, not being seen. By digitizing and publicly exhibiting tapes dating back to the early 1970’s that were produced by Rochester’s People’s Defense Committee and Portable Channel to address police brutality in the city, Tara hoped to add weight to the pressure in Rochester to abolish the police. One of the most important things an archivist can do is make suppressed histories seen, to deepen the context, importance, and longevity of struggle.

The necessity of media being seen became especially relevant after the death of Daniel Prude, a forty-one year old black man, at the hands of Rochester Police, who fought to keep body cam footage from the public eye. Tara Nelson’s moment of radicalization came when she and several other demonstrators peacefully protesting Daniel Prude’s murder were pepper sprayed at close range in the middle of a chant. Following this instance, she describes being involved in several other demonstrations where peaceful protestors were brutally assaulted by police, once even being trapped on a bridge while being continuously saturated in pepper spray. 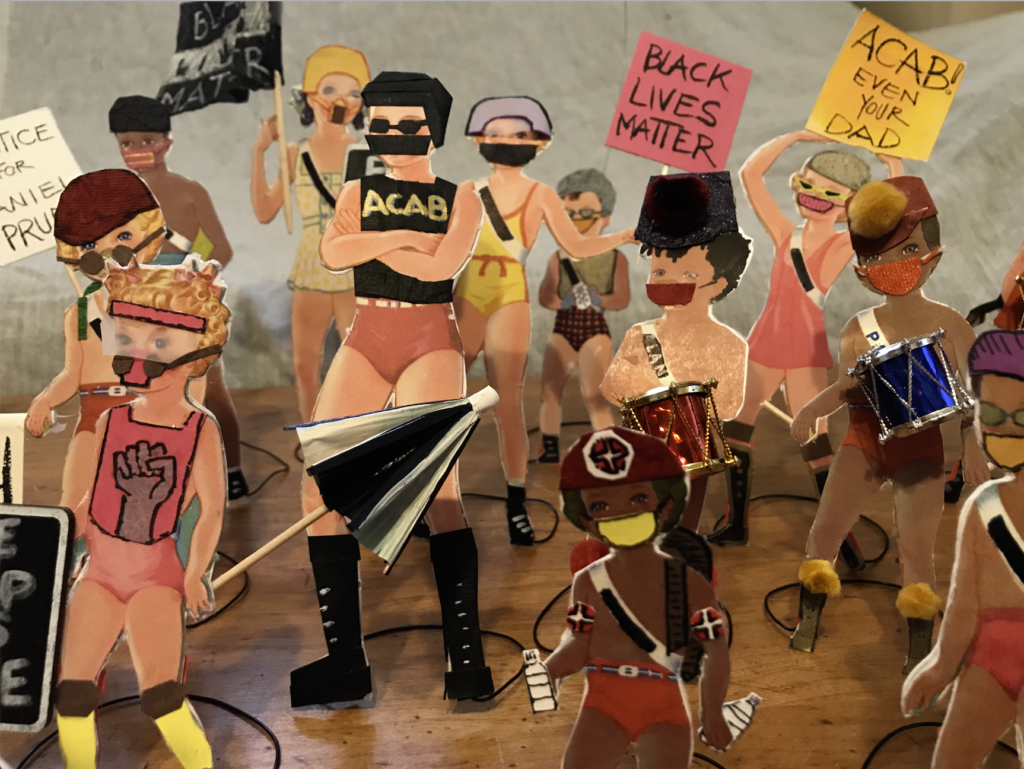 These experiences inspired Tara to start digitizing and exhibiting pertinent tapes more vigorously than before, hoping to bring the dire passion of street organizing to academic institutions. Holding The Line Against Police Violence, a screening and discussion series based around the history of independently-produced media addressing police brutality in Rochester was held recently, with all works being made available and free to the public on VSW’s Vimeo page. Tara’s involvement in demonstrations to abolish the police also inspired a personal body of work, Antifa Paper Dolls, using found paper dolls from the 1950’s and altering them to become protestors.

While much of Tara Nelson’s work has become increasingly linked to her activism, she has also produced a wide range of work in the forms of super-8 diary films, sharp-humored performance videos, and a series called FourMats that explores the ways different media formats influence how objects of representation are perceived. In her black and white, hand-processed super-8 film Snow, the joys of Christmas collapse into the indifferent harshness of winter and the bleak horror of a medical emergency. In her video Babystorm, expectations of motherhood, initially endearing, literally bury her alive. And her piece End of Empire, which is now on view at the Memorial Art Gallery in Rochester, presents the city’s famous Kodak building through four vertical projections—super-8, 16mm, 35mm slide film, and HD video— to break the building down into quarters, each with its own different mediated appearance.

Tara Nelson understands how arbitrary popular trends in media are, and sees media for its power and influence, pushing its boundaries accordingly. Make sure to check out her work, and keep an eye open for new media made available through VSW’s collection. Support independent media. Make it accessible to the people to make it their own. Give people the power.