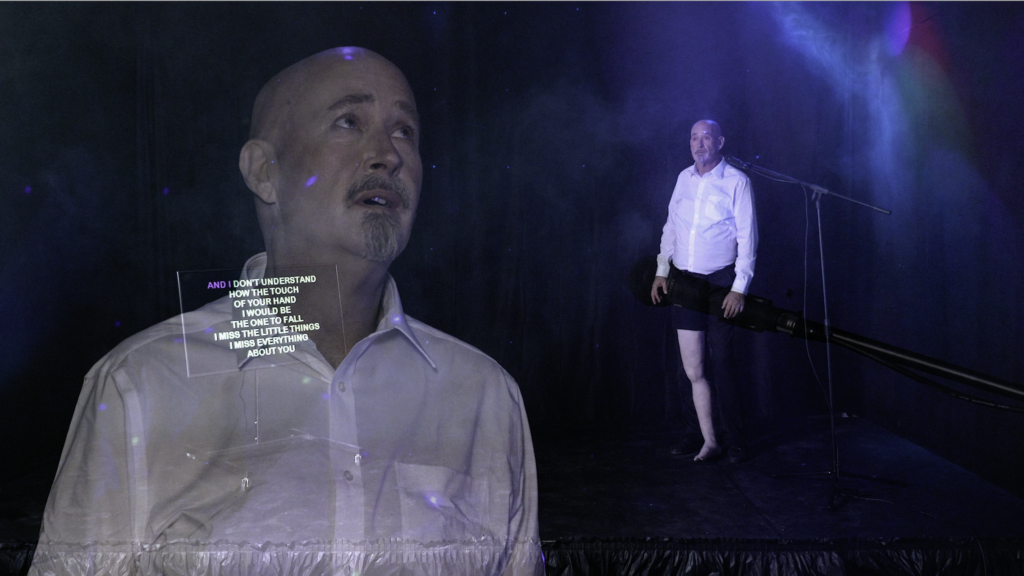 There are lots of good jokes about White people having no culture. Witty memes about White culture just being about uptight discomfort, a need for control, disdain for the different, and having poor taste all ring true more than half the time. White people join hands self-righteously as we ridicule other White people who are somehow more White than we are, to help ourselves sleep at night, or for social currency, or maybe to show an actual interest in systemic change. Whiteness is a double-edged sword, with one side being as sharp as the other, though each cuts for completely different reasons. On one edge, there is virulent racism, misogyny, and a sense of entitlement. On the other, a solicitous performance that fails to be effective in all the areas that count. 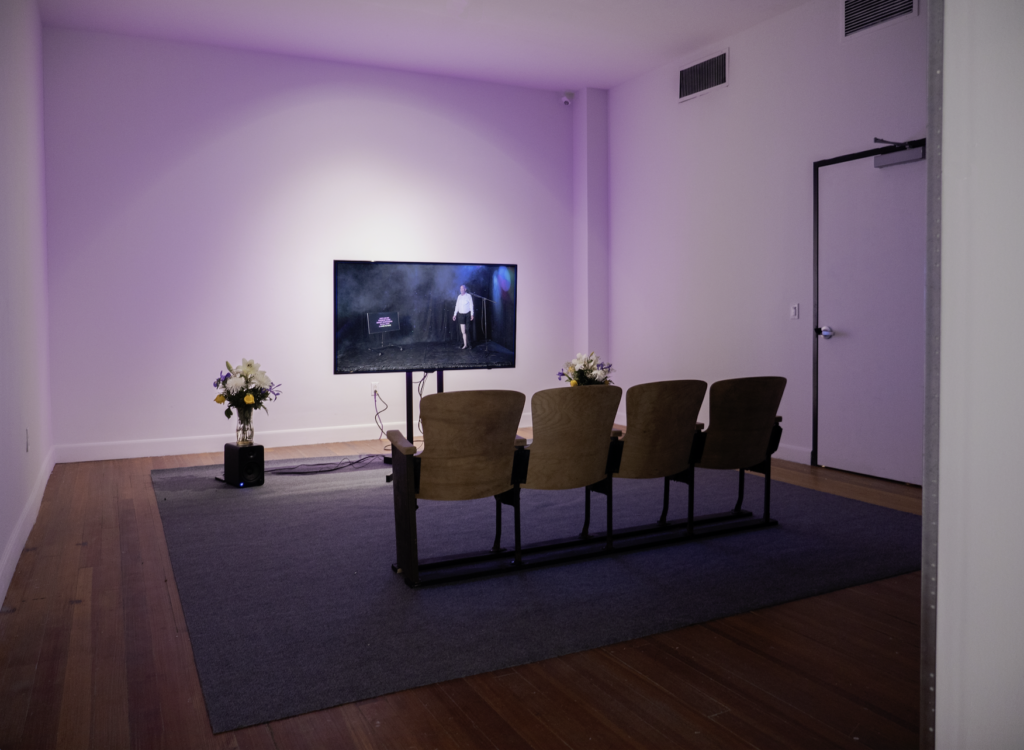 And manhood, whatever that even means, is as messy and toxic a concept as there is, whose predominant function is indiscernible. Control, aggression, patronizing and devaluing the feminine at every turn; these are some of the problem qualities associated with manhood and masculinity. But is that all there is to it? Is it as much about the suppression of so many feelings as it is about the presence of the most basic animal ones? What does it mean, today, to be a cis White man? Can they be trusted, or do the roots of their problems run too deep? Can change for the better take place from within? What does a White man’s self-awareness and accountability genuinely look like? What are their feelings, their innermost horrors? Moreover, considering all the violence they’ve enacted, should anyone even give a shit? Cue Ryan Hawk, whose work doesn’t necessarily answer these questions, but tears at them with a cool, absurd viciousness that bites down with the self-aggrandizing weight of the White man’s incomplete and contradictory history. 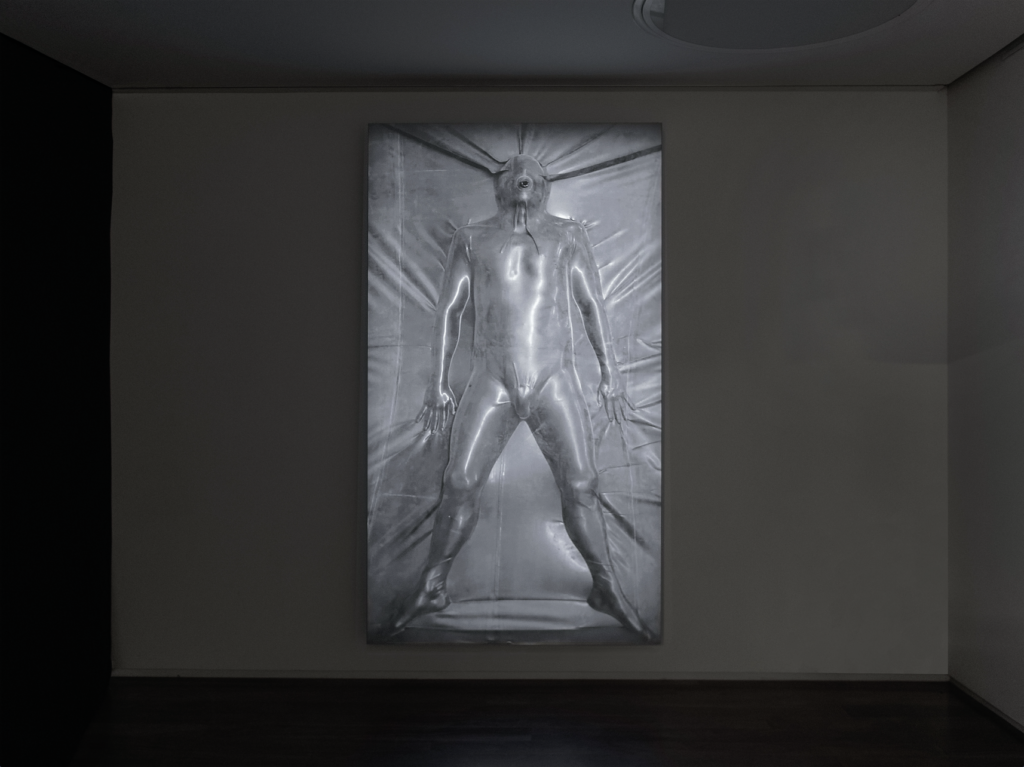 Ryan Hawk, who was born and raised in Houston, Texas, lived in Boston for four years as an undergrad at The School of The Museum of Fine Arts. Like many artists’ early adulthoods, his was filled with discovery and exploration. He enjoyed Boston and the support and education he got there, but like so many who come to the city, he found no compelling reason to stay and moved back to Texas shortly after graduating. And it was back in Texas where he began to really refine his practice into what it is today. 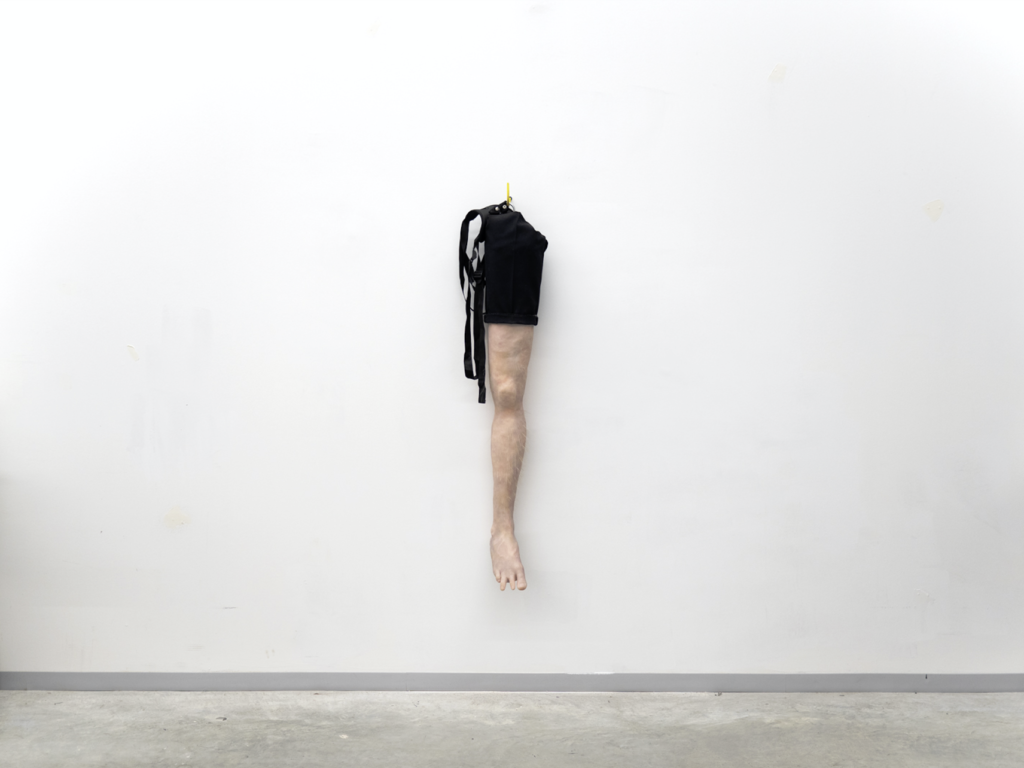 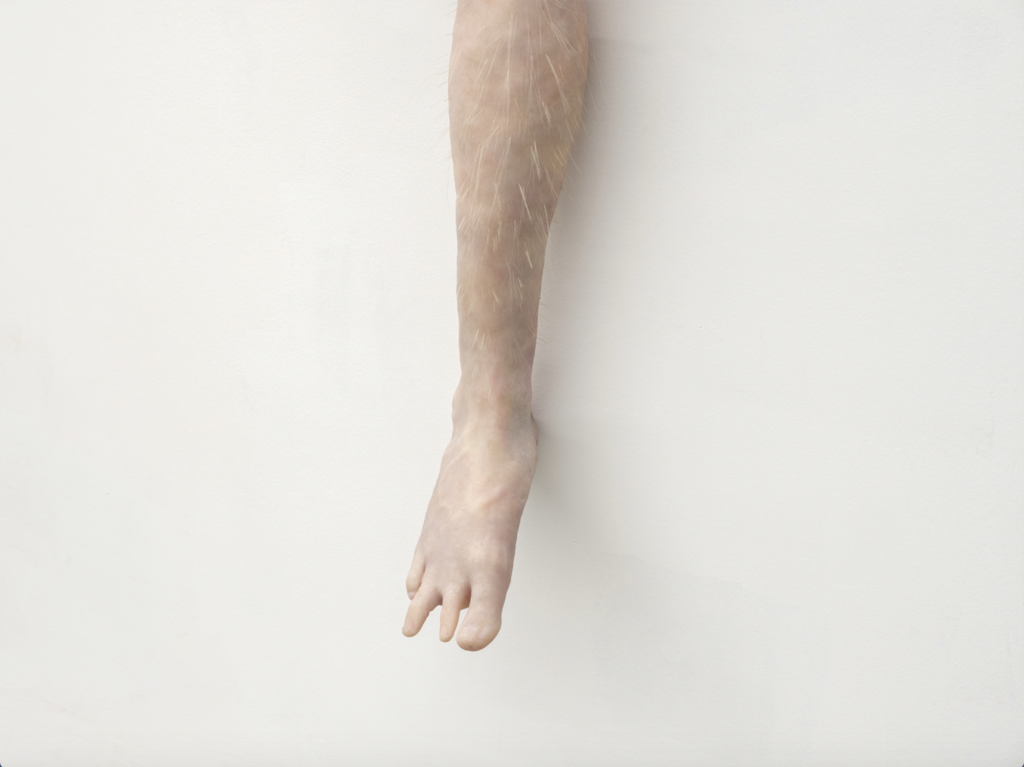 Hawk, a gay White man, is interested in the grotesque and violent history of Whiteness. This history follows even the most harmless-seeming White men like a sharp embryonic tail that refuses to disappear or be cut off. White men have been aestheticized as a fascist ideal that terrorizes and invalidates bodies and ways of life that don’t conform to its image of normalcy. They have dominated culture so much so that even good intentions feel like nothing more than a guise. And yet, like the global majority, they are living and breathing creatures with feelings. They, too, are the subjects of capitalist degradation. And so, the self- pity and agony of the most dangerous type of human being causes an uncomfortable, absurd tension that could make certain viewers nauseous. These most vulnerable, disgusting, base, and inadequate aspects of White “male” identity are Ryan Hawk’s true subject. 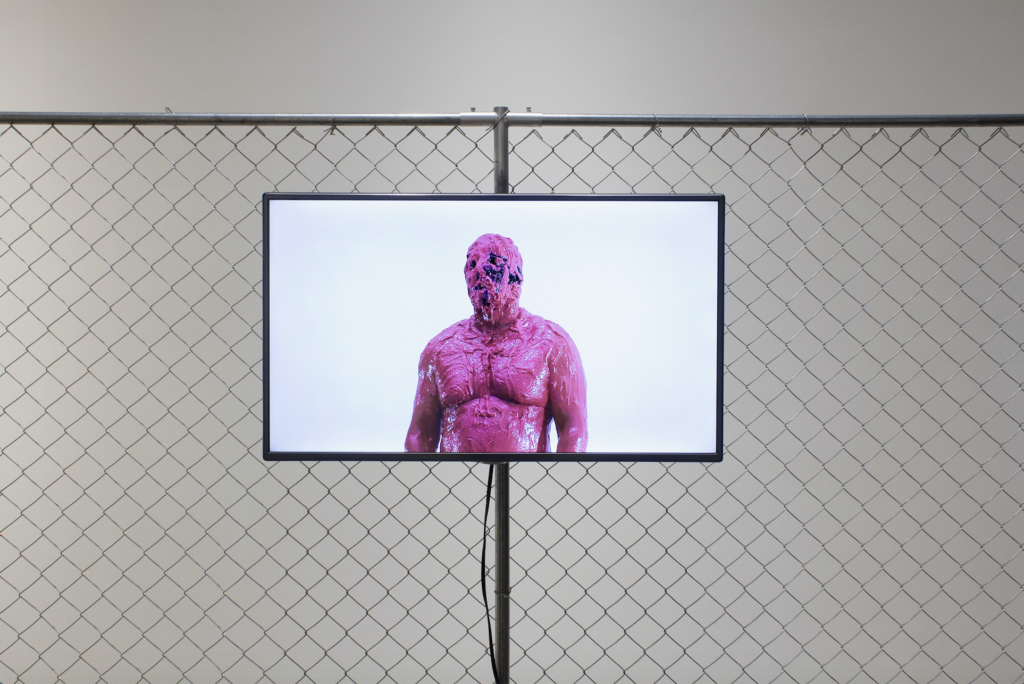 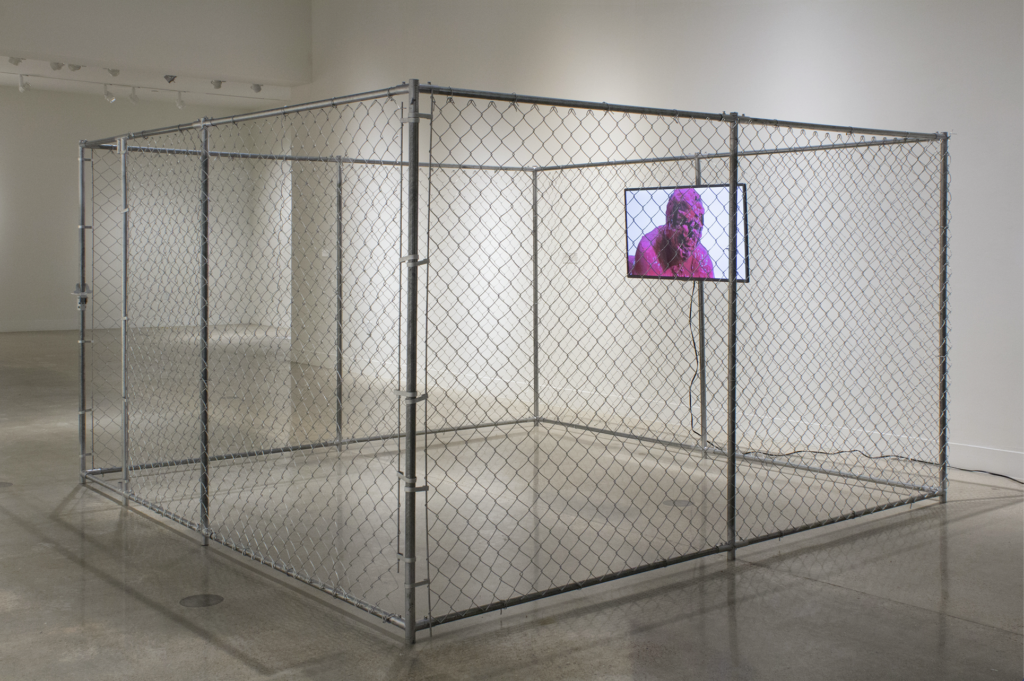 The content of his work usually has to do with muck, filth, bodily function, disfiguration, and violent dismemberment. The pain of these men is acknowledged seriously, though the way it manifests itself is the object of satire. White insistence on appropriating the rhetoric of marginalization is seen for its patheticness. But it is the pristine, almost antiseptic aesthetic that gives it its necessary tension. Hawk makes hyper-realistic silicone prosthetic limbs and skin flayed from imaginary anonymous men. He uses crisp HD video either projected or on large monitors in barren gallery settings to show men isolated with their bodily functions,faced with their inability to transcend anything. Some of the men who appeared in his earlier videos he met on gay cruising apps; getting off on submitting to his direction, they become absurd objects of confusion and degradation. This power dynamic speaks directly to the need to relinquish control as a means of processing social status. These men scream in both pain and pleasure, roll in filth, and try to hold balance. They are trapped in loops that could have been shot by a famous Hollywood cinematographer, using the visual language of dominant cultural and social imagination critically. The crisp, hyper-real imagery Hawk is able to achieve through contemporary means is at odds with the raw dread that is traced through the White man’s self-mythology. 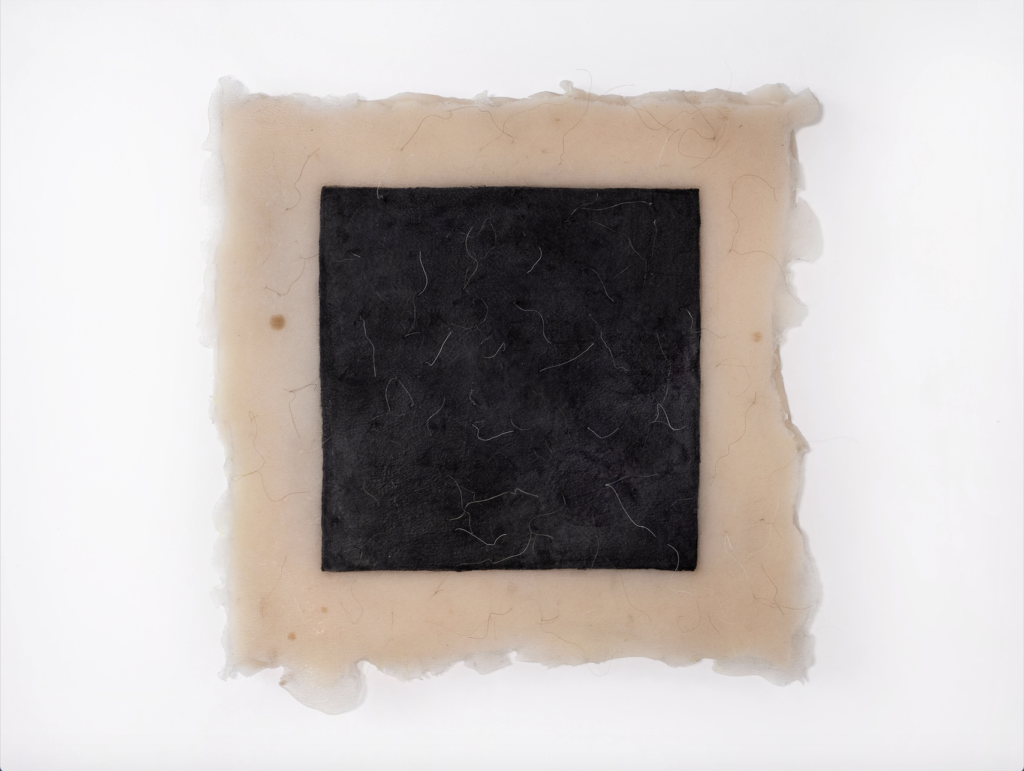 20th Century European philosophy, most of which originated from men privileged enough to have the time and leisure to think long and hard about the meaning of their existence, often appears ironically. Existentialism, Base Materialism, Absurdism, Surrealism, and so on are all parts of the vocabulary of Eurocentric White dread and often attempt to explain the horrors of behavior. The big toe, the body part Georges Bataille once wrote an essay about, which he said was the “most human” part, gets pushed to new limits by becoming an implement that seems to have no end. Philosophical considerations whisper in low tones to narrate a man confronted with a cow’s shitting asshole, prompting him to go on a mudding trip fraught with surreal violence. 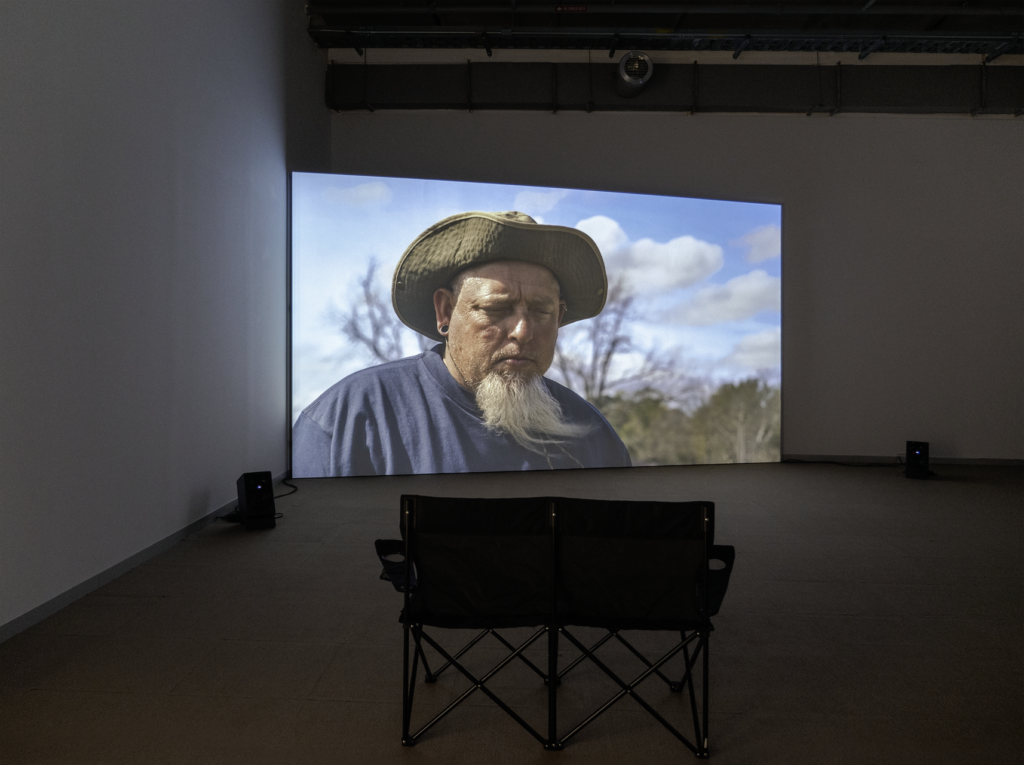 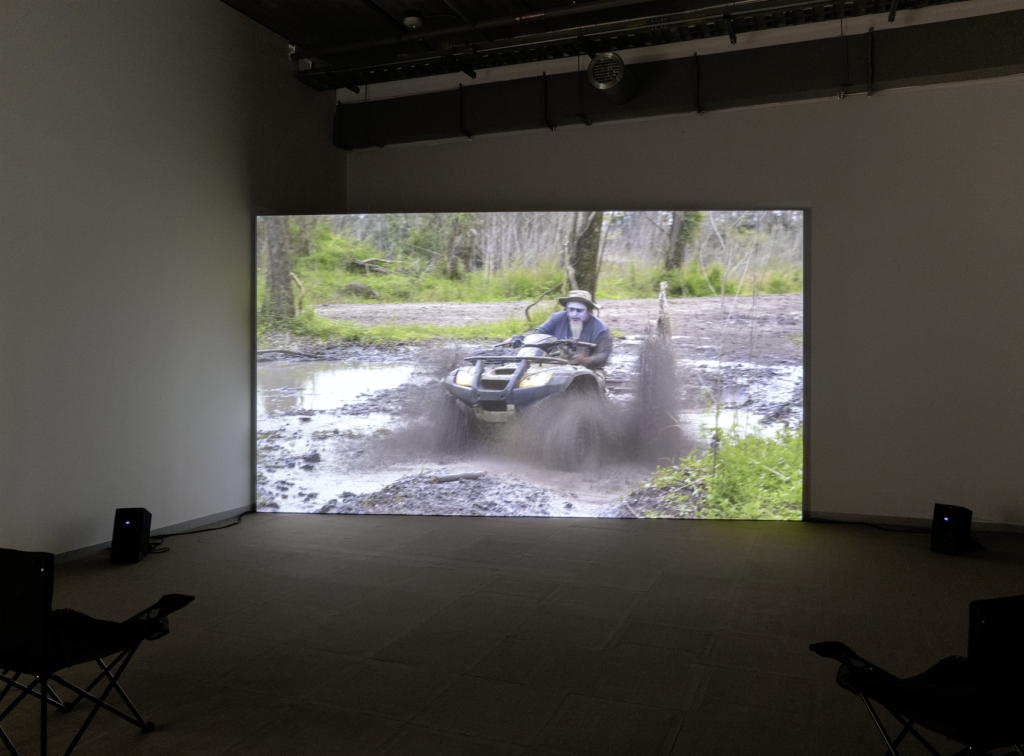 Viewing several pieces by Ryan Hawk in succession, it becomes apparent how firmly he has his finger on something terrible and possibly inherent. There is no word for what this thing is. There is both a movement and an entropy to everything he makes. These White men, and their parts, and amalgamations of bodies and identities melted, torn, degraded, and isolated are contemporary, but trapped in the limits of their history. What does the agony of the most dangerous type of human look like? What does it mean? Why does it matter?  In his video …tThis wWary wWay of wWalking, a mysterious, bass-voiced narrator states “to forget oneself is the most distressing kind of social accident there is”, begging the question: can oneself be forgotten without having been known in the first place? 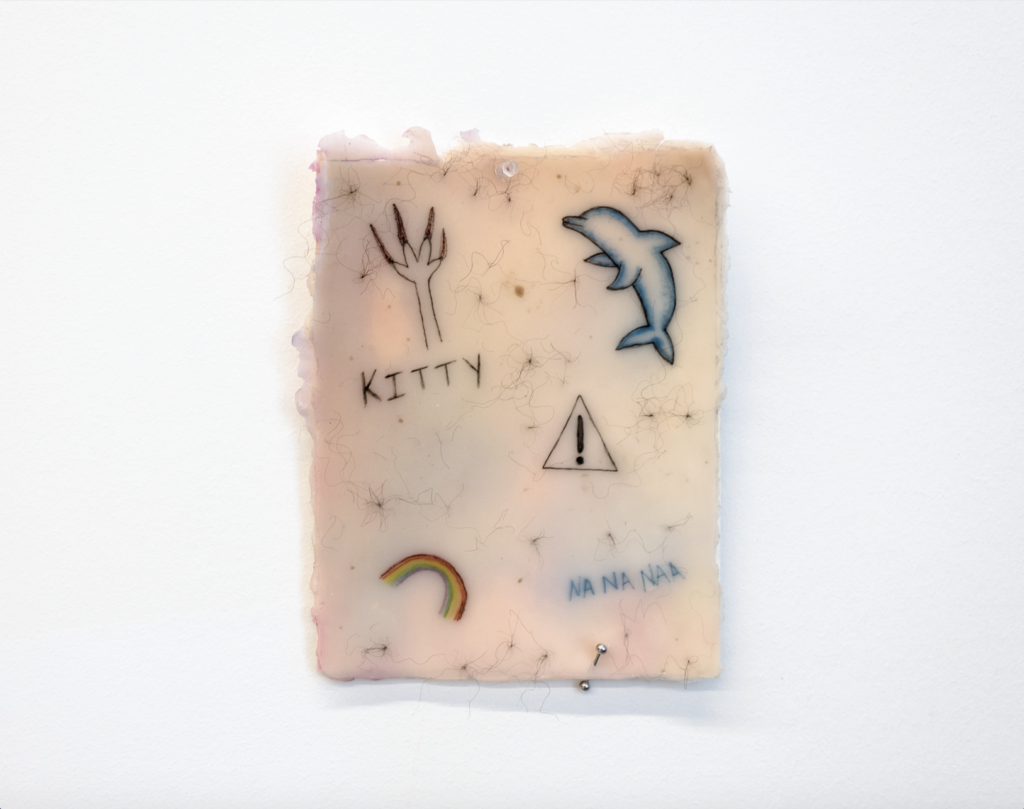 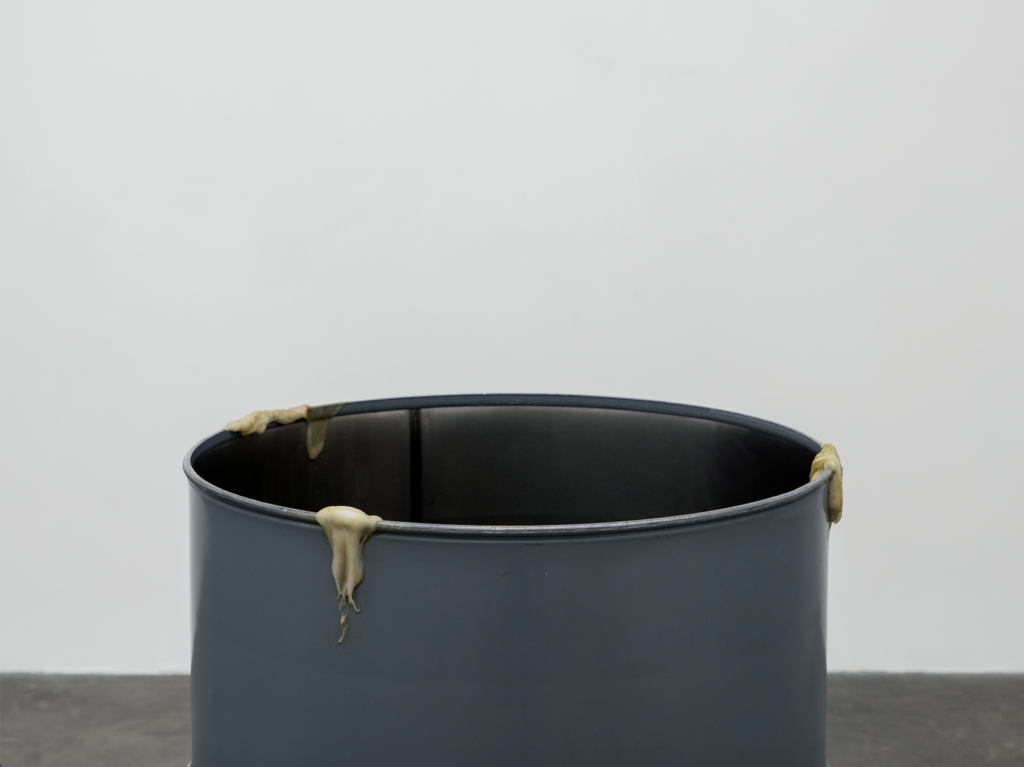 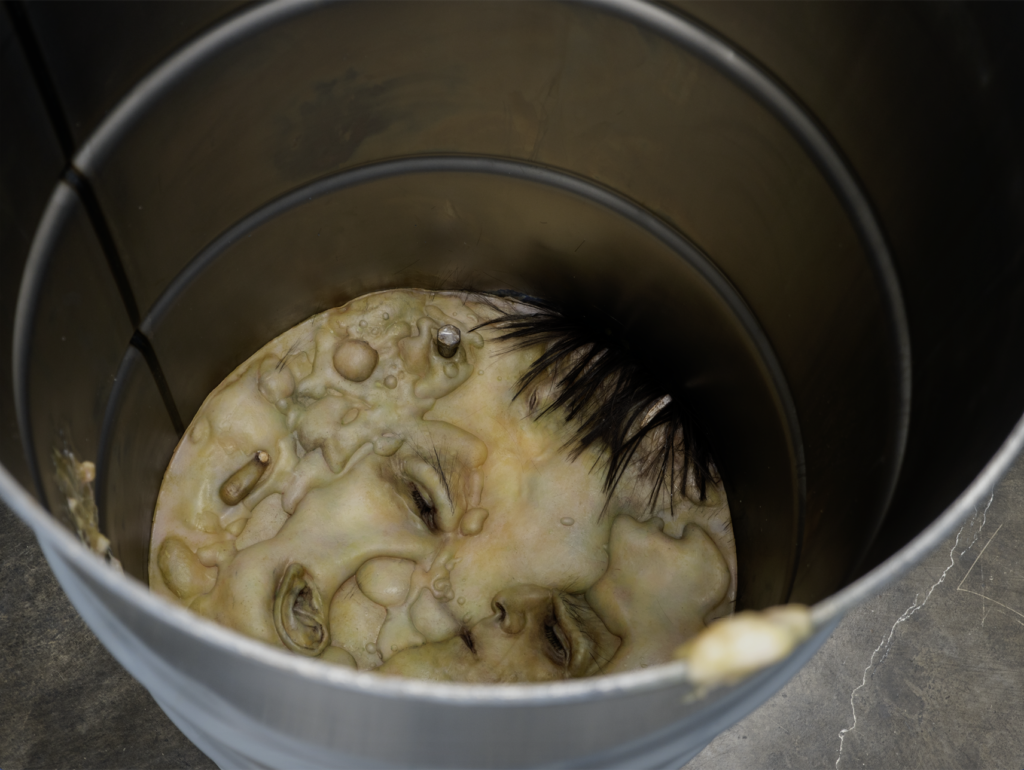 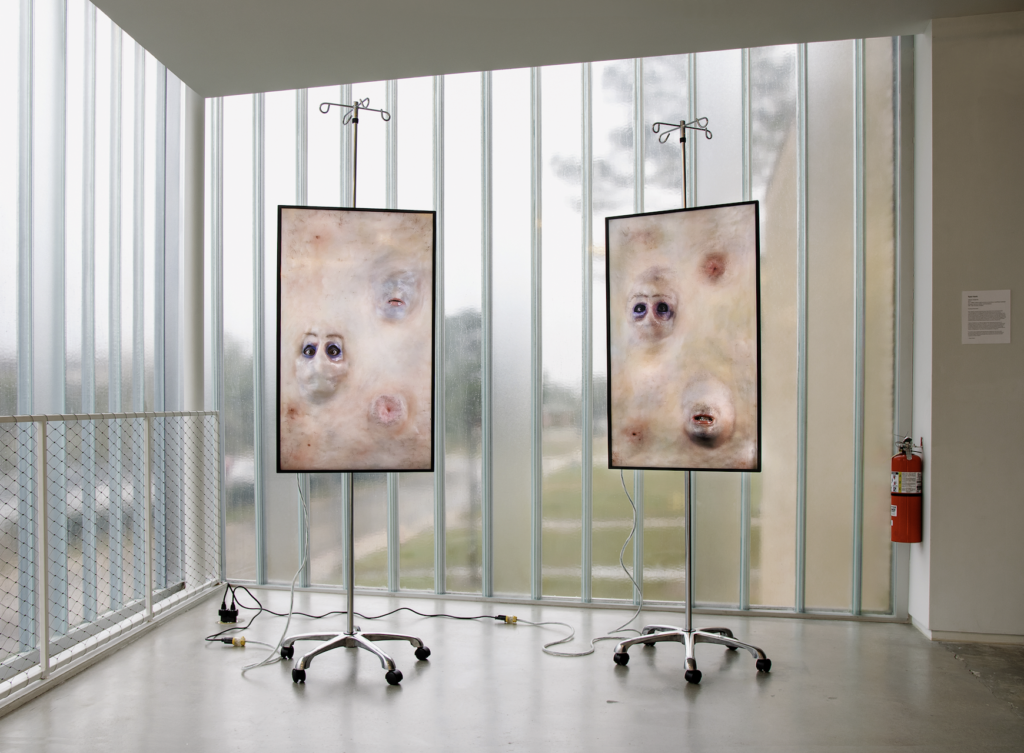 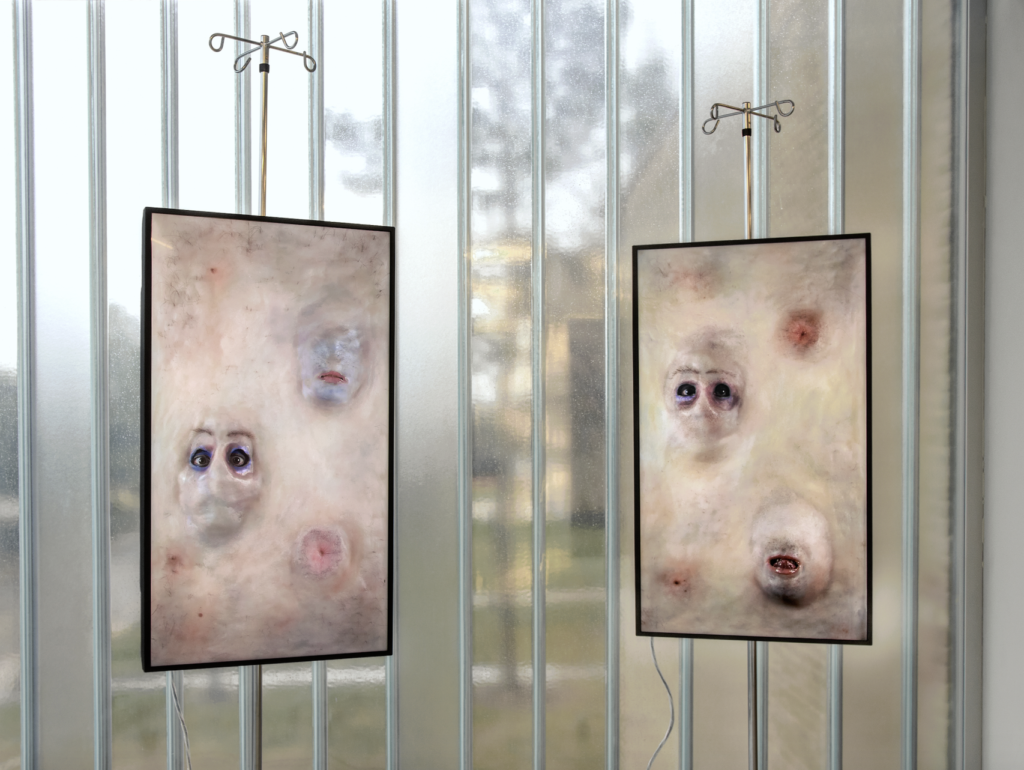 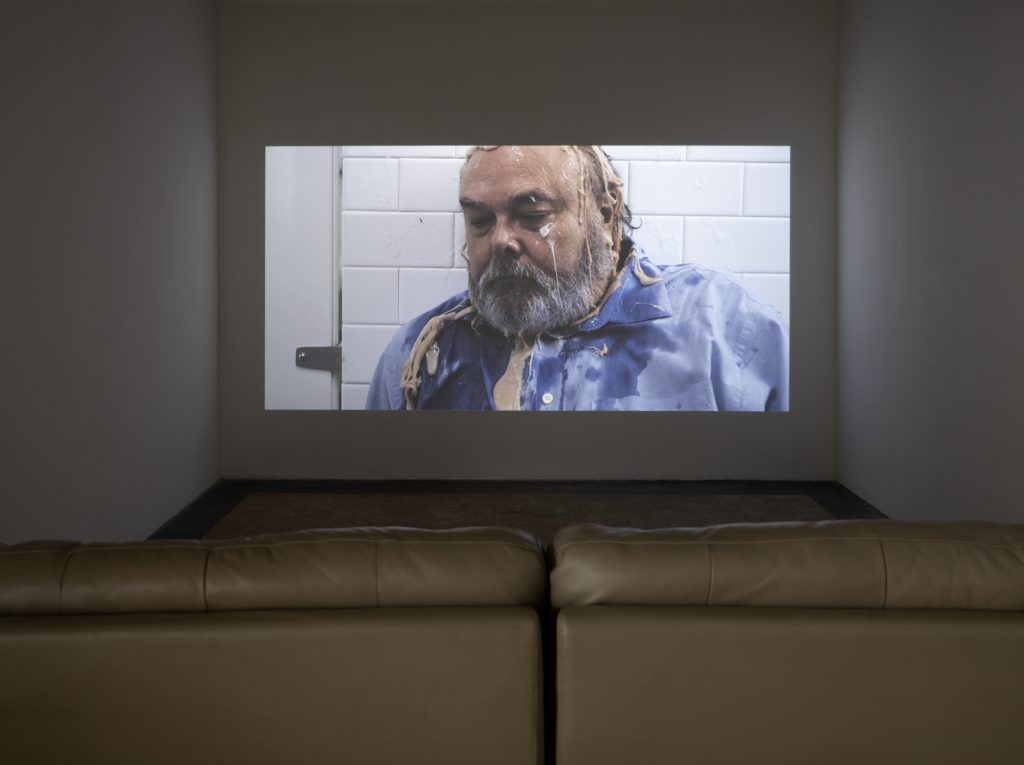 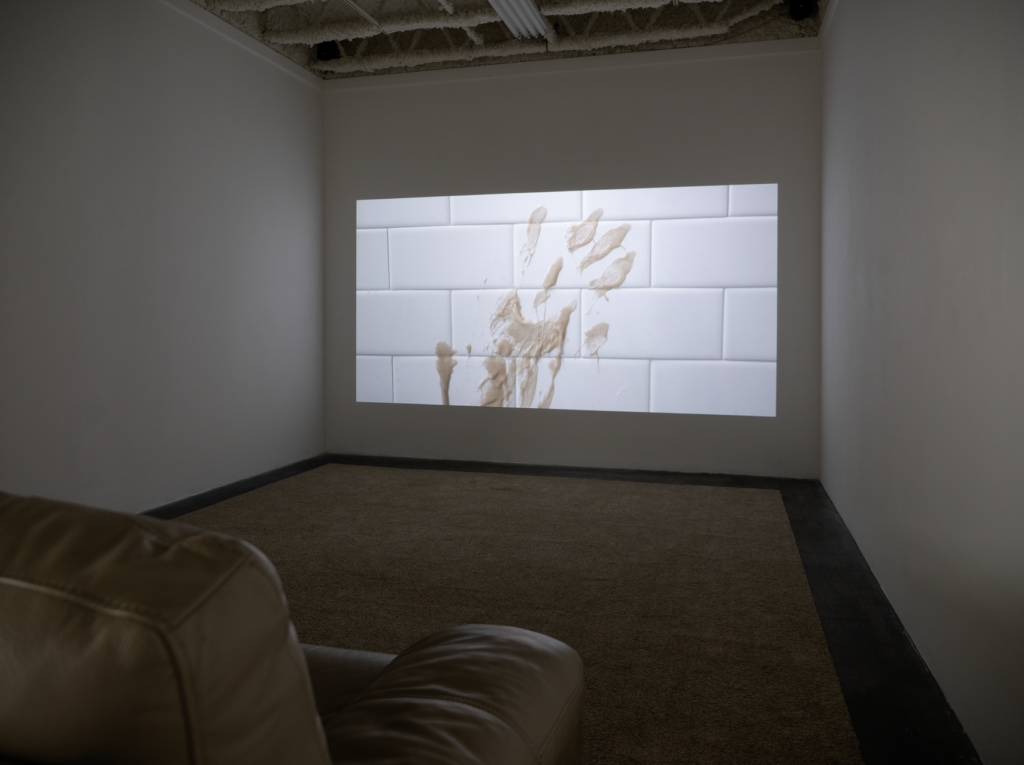 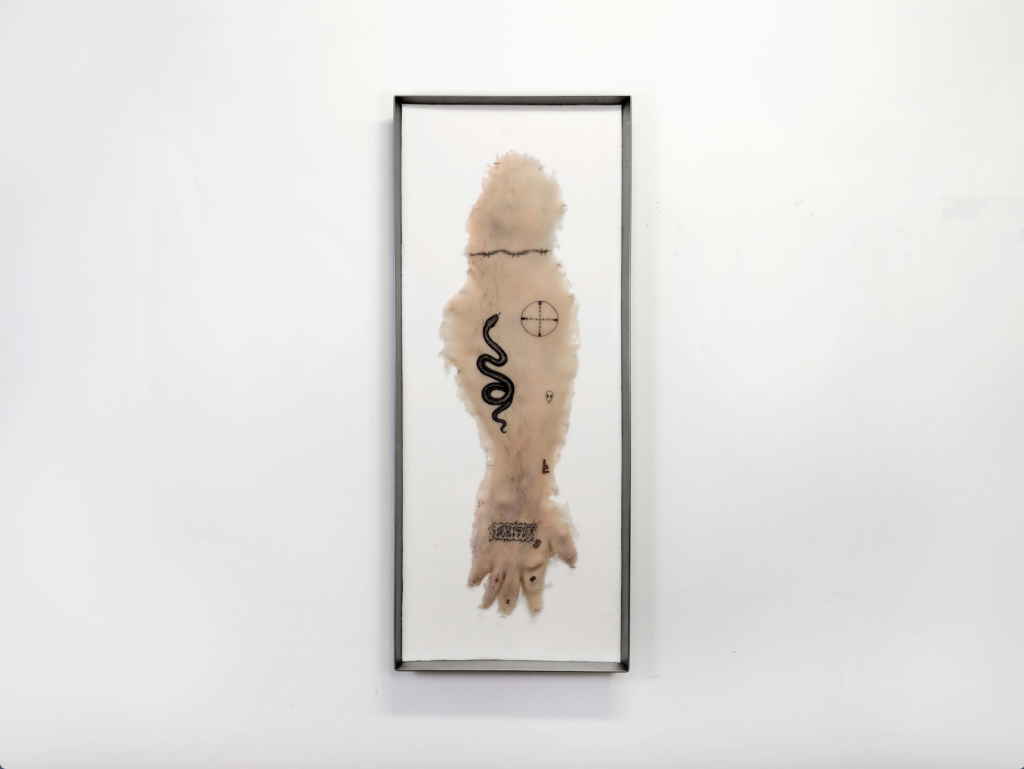 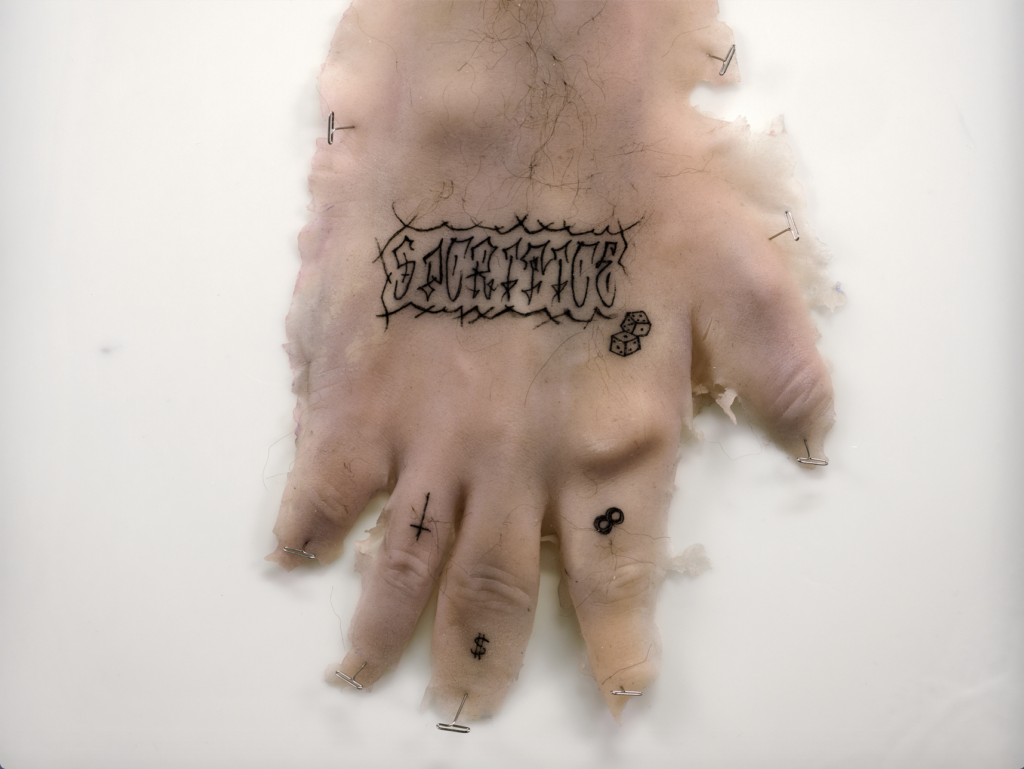