On Thursday, Boston made national news when President-elect Biden appointed Marty Walsh to lead the Department of Labor. As the former president of LIUNA Local 223, Walsh will be the first Secretary of Labor in nearly 50 years with union experience. It’s another feather in the cap for Boston’s progressive reputation; the city has some of the most consistently high union participation in the nation’s history, and we’ve been on the right side of a lot of hard-won labor victories over the years.

Walsh’s appointment is going to do a lot to drive up our city’s faith in pugnaciousness and union spirit and spit, and while that’s probably a good thing, it’s going to obscure a lot of ugly realities from recent years. Locals know. Boston is still the city where the decline of infrastructure is neck-in-neck with its expanding luxury. This is the greater sum of Walsh’s legacy in Boston, at least according to the socialists.

“As a union member, he dropped the ball,” said Toya Chester, who sits on the executive committee of Boston’s chapter of Socialist Alternative–an international revolutionary labor movement headquartered in Belgium. Chester, a 32-year-old West Roxbury resident who also serves on the national committee, was referring to Walsh’s handling of 2019’s Stop & Shop strike.

Chester, who said she was “active in the strike,” claimed that Walsh “only came the day Joe Biden visited, and marched only one time around the picket line.

“As a union leader– these people are demanding healthcare, fair wages, and vacation benefits–he was completely absent,” she added. “I don’t have any illusions about him.”

Chester, a member of IBEW Local 103, admitted that it excited her “to see a Building Trades brother appointed to the White House.” Something about Walsh’s famous story appealed to her, as it seemed to appeal to Joe Biden; she referenced his decades of union membership, his college graduation at the age of 42, and his dedication to Boston’s working people as a union president.

“But he’s a Democrat,” said Chester. “It’s impossible to ‘put power back in the hands of the working people’ as a member of that party. They literally represent the ruling class. It’s just rhetoric, y’know?” 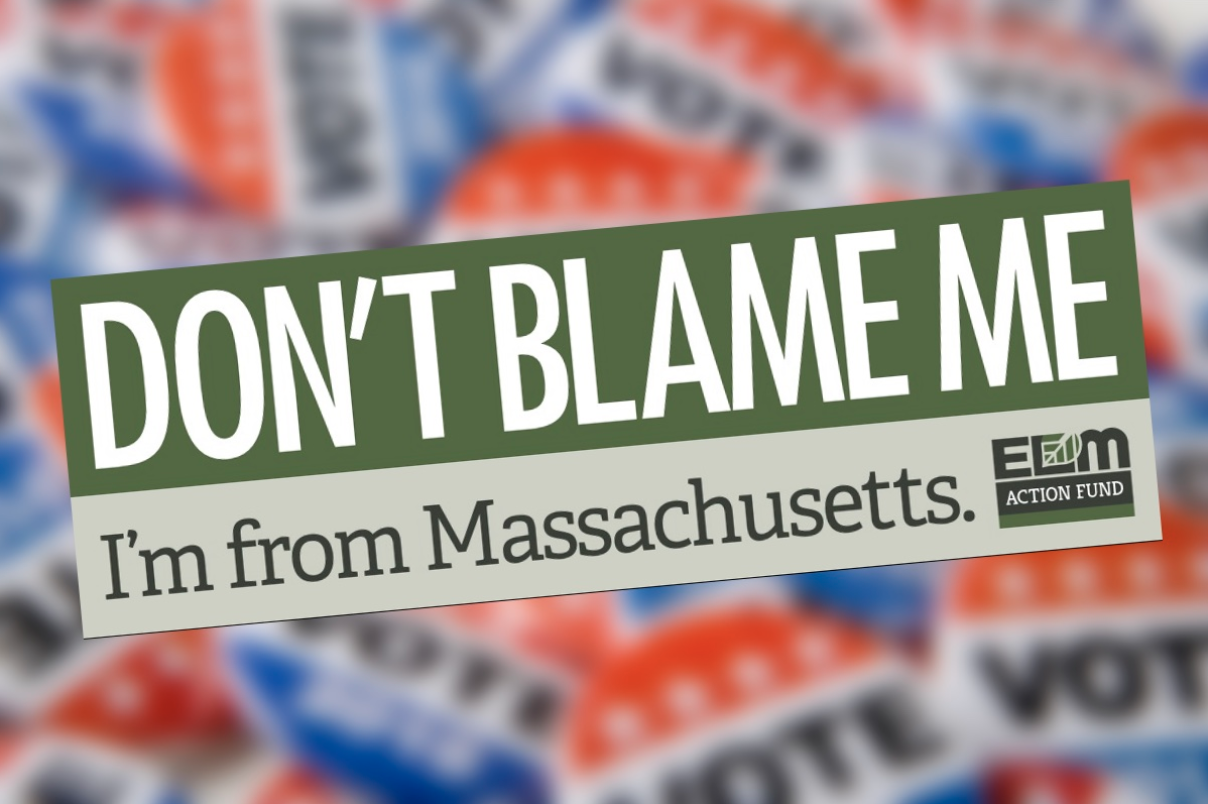 The Environmental League of Massachusetts reissued their famous bumper sticker in 2016. Via Boston Magazine

In spite of a growing interest in socialism among young Bostonians, city and state politicians tend to fall somewhere in the Marty nexus–progressive by the rest of the country’s standards, but unable to explain away the gulf between the economic classes in the hometown. Massachusetts politicians, like their pilgrim predecessors, tend to see themselves as the traditional defenders of the country’s altruistic instinct, and almost 50 years after the Nixon-McGovern race still ask you not to  blame them, they’re from here.

It might sound odd that a city could simultaneously have the country’s fifth highest rents and the 9th worst infrastructure and still consider itself a liberal paragon. Interestingly, though these aspects juxtapose on the surface, they just seem to go hand-in-hand in left-wing areas. You could get bogged down in the theories here. The Atlantic attributes this phenomenon to a tendency by real estate developers to capitalize on the efforts of successful historical and environmental preservationists. There’s also the fact that money talks.

In #bospoli (as Twitter would have it) it’s a given that a large number of Massachusetts’ legislative outcomes look like trade-offs between progressive and the repressive. Take, for example, the state’s decision to increase the minimum wage to $15 as a tradeoff for the abolition of time-and-a-half on Sunday. Or plans for expanded bike lanes that involve cutting down the majority of a neighborhood’s trees. All of these daily concerns play themselves out in the great shadow of the city’s universities, boasting the biggest liberal conundrum of them all.

“It’s not that living here doesn’t have its benefits,” said Toya Chester. “But one of the grand inequalities in this city is that universities don’t have to pay property taxes, since they’re classified as nonprofits,” she laughed. “But we know that they’re not nonprofits!”

“Harvard’s endowment is $37 billion making it the richest university in the world and Northeastern’s president makes over $3 million per year, a salary more reflective of a corporate CEO than a leader of a nonprofit,” says Boston Socialist Alternative’s website. “Our public schools are underfunded and housing is unaffordable. We have the 4th highest median rent in the country for a one-bedroom apartment and more than half of Boston tenants are rent burdened, meaning they pay more than a third of their income in rent.”

“Unfortunately, we’re not like New York or Chicago where you have socialists who are elected to City Council,” said Chester. “We elect because we hope that they’ll give us a voice, but most of the time they’re beholden to the interests of their rich donors.” 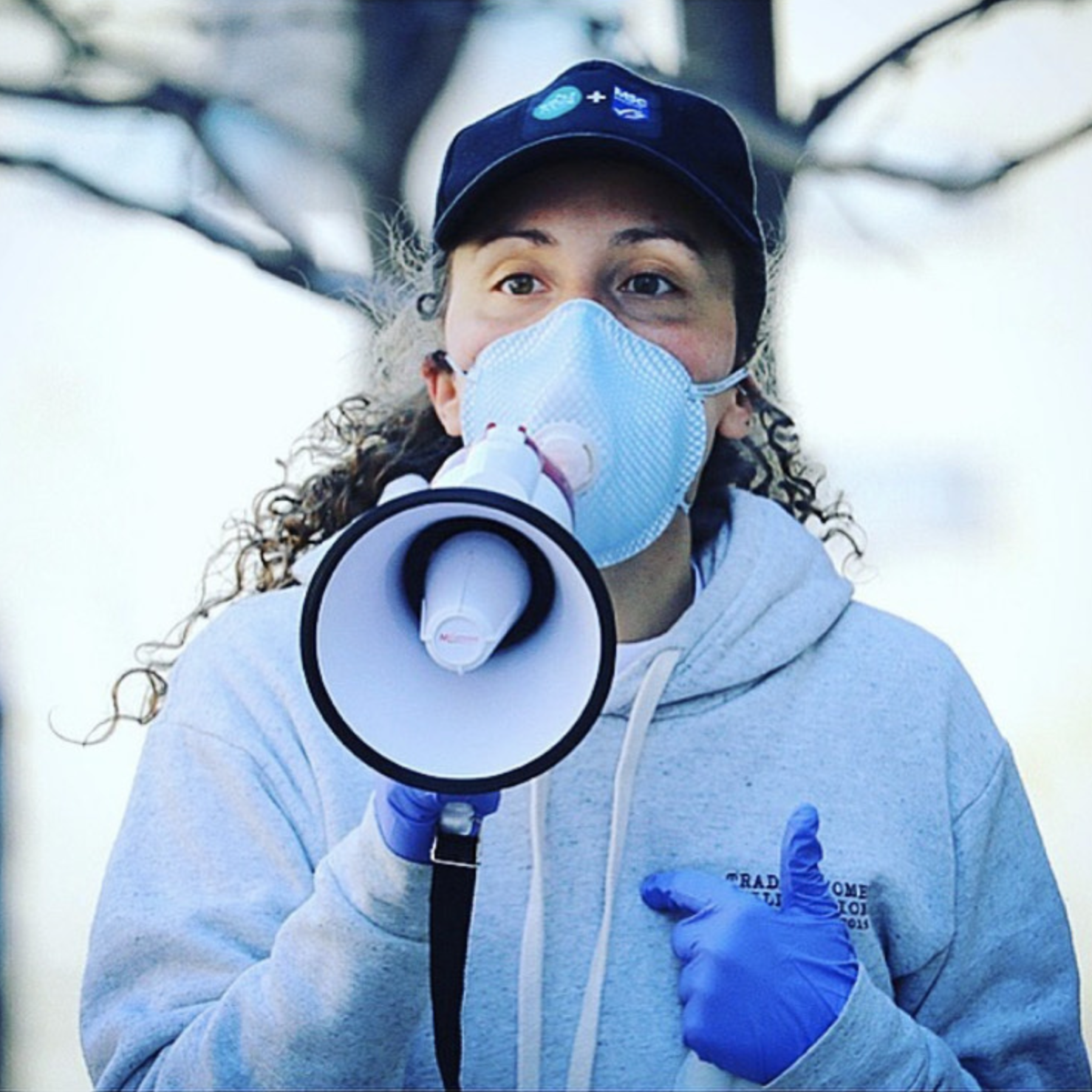 Ms. Chester speaking at a rally on 4/7/20. Photo by Pat Greenhouse for Getty images, via Toya Chester

Socialist Alternative’s tactics are more reminiscent of the previous century than they are of the Digital Age: strikes, boycotts, and occupations–all “tools of the working class”–are considered fundamental by the group. Toya Chester referenced the Montgomery Bus Boycott of 1955-1956 as a good representation of direct action.

“So much planning went into that,” she said. “Literally years and years of planning. And that’s what made it successful.”

After the events of January 6th, Boston Socialist Alternative was one of the first groups to hold a demonstration, taking place on the windy steps of the Massachusetts State House on January 7th. A number of party members spoke, including Chester, who told me she got a rare sense of unity from the crowd.

“Sometimes at these types of events, you’ll push and you’ll say something about the Democratic Party and you won’t get cheers,” she said. “This time, I said something about how nobody has illusions in Joe Biden, and everyone started cheering.”

We do have a reliable cohort of Leftist radicals here, too. It’s not all Harvard and the BPDA and Marty Walsh. Malcolm X, Ho Chi Minh, and Dr. Martin Luther King, Jr. have all left their mark on this city in meaningful ways. Further afield, the spirit of the Lowell Mill Strikes and the ghosts of Sacco and Vanzetti suffuse local lore. My own great grandparents, Lena and Irving Yarin, escaped the Russian pogroms only to become card-carrying Socialist Party members in Boston.

Crucially, much of the efforts of Boston Socialist Alternative are not focused on the city, but rather at national and international issues.

“Socialism is an international goal, y’know–it’s not like we can say, ‘we’re going to make Boston socialist,’” Chester explained.

She told me that the Kshama Sawant recall campaign in Seattle is a good place to track the efforts of the group-at-large. Jason Redmond for Reuters via The Nation

Seattle City Councilwoman Kshama Sawant is the city’s first elected socialist in over a century–she also happens to be a Socialist Alternative member. The councilwoman is currently defending herself amid a bitter campaign for her removal, which is sponsored by a number of right-wing residents, and also apparently Amazon. Chief among their complaints is Sawant’s decision to invite Black Lives Matter protestors into City Hall over the summer in order to hear their demands.

As of yesterday (1/8/21), Sawant’s appeal verdict has been delayed by the Supreme Court.

“The reason here is because of the precedent this could set,” said Chester. “We need to be able to show that socialist elected officials can keep their office and use it to build a movement.”

The movement, propped up by efforts of socialist-leaning women of color in office, will likely crystallize around people like Sawant, and Alexandria Ocasio-Cortez. Ayanna Pressley, while fundamentally outside right-wing influence, often trails the other Squad members in terms of stuff like strict adherence to Marxism–maybe it’s the Puritan lawmaker thing. Maybe it’s the Kennedy magnanimity. Democrats and socialists just don’t mesh here.

These days, in the late-stage gentrification of this city, the intersection of worker interests and political acumen is a rarity. The Trotskyites don’t want to stoop to a career of endless fundraising and cronyism, and the Democratic politicians must continue in their tightrope walk of networking and making good impressions. The fact remains that of the great bully mayors of yore–your Martin Lomasneys, your John Fitzgeralds, your James M. Curleys–none were ever appointed to the United States Cabinet. None of those men had the opportunity that Marty Walsh has, and it just doesn’t feel like a victory when no one can afford to live in his city. Maybe Walsh’s appointment will put an end to the puzzling legacy of the “Boston trade-off” in local politics: Our mayor kept the unions strong, which any socialist will tell you is pretty damn important, but he was also saw the white collar price-out reach “destroy beloved community center” proportions.

In the end, it all comes back to that old Pilgrim speech from history class; “A model of Christian Charity” by Rev. John Winthrop; the city on a hill. As Bostonians, we’ll always carry with us an inflated sense of self-importance. All political parties in the state have benefited from the stoicism of the Boston Democrats, whether or not we agree with them. Joe Biden clearly saw something that he liked about it, and it’s clearly something we like about ourselves. But where is the progress under all this progressiveness?

We’re going to come out of lockdown to a new mayor and an economically-ravaged landscape. In a lot of ways it’s going to look a lot like the Boston of old; half-finished construction projects and a fitful small business economy. It could be anyone’s game. It could finally be time to earn our scrappy, working class reputation.

“There’s a debate going on right now as to whether or not we can reform the system,” Chester said, of the ultimate question facing a fractured and traumatized left-wing. “I personally don’t think we can. We know how to feed, house, and clothe the world but we’re not doing it. Capitalism is not progressive anymore; socialism is.”