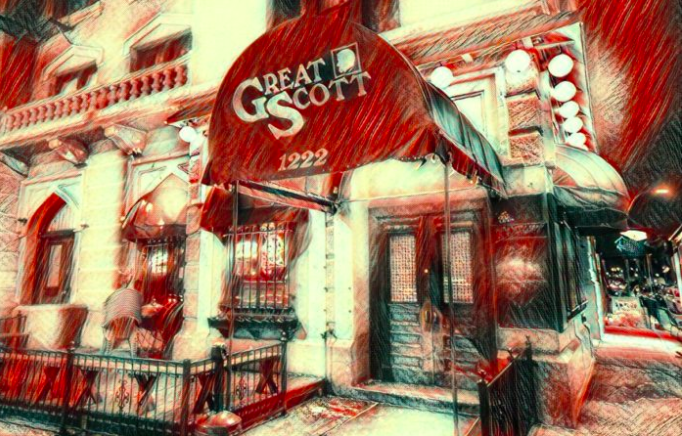 This research is part of a larger investigation by Hassan Ghanny and the Boston Institute for Nonprofit Journalism connecting a handful of real estate trusts to thousands of properties across the region.

An earlier version of this article mistakenly noted that the owners of the building in which Great Scott is located, Oak Hill Properties, “would not renew their lease, reportedly due to concerns that a concert venue cannot possibly be profitable following the COVID-19 crisis.” We regret the error, and have included a clarifying statement from Oak Hill below. You can read their full letter to DigBoston here.

On Friday, May 1, a shock and disappointment echoed through the Boston indie music community as legendary Allston venue Great Scott announced it would shutter. As general manager Tim Philbin wrote in a statement:

“It is with a heavy heart today that I announce that Great Scott will not re-open. For 44 years Great Scott has provided entertainment and more than a few beverages to a loyal group of customers. From its inception in 1976 as a local bar featuring blues and folk performers to the 1980s and 1990s as a beloved college dive featuring cover bands and DJ nights, to the 2000s and its emergence as one of the best live music venues in the city, Great Scott has meant many things to many people. Through it all we’ve aspired to be a good neighbor to our community and a friend to all who walk through our doors. There is a sign that still hangs in the venue from the establishment that Great Scott replaced. The name of which was Brandy’s. That sign reads “Where Incredible Friendships Begin.” I’m glad we never took it down because it explains Great Scott better than I ever could. Take care of yourselves and each other.”

The building, located at 1222 Commonwealth Ave at the corner of Harvard Ave in the heart of Allston, has played host to countless bands and dance nights for 44 years and is already being eulogized extensively. But why is Great Scott closing? As has already been made clear, the owners of the building, Oak Hill Properties, will not renew their lease, reportedly due to concerns that a concert venue cannot possibly be profitable following the COVID-19 crisis.

But who exactly is Oak Hill Properties?

According to the Commonwealth of Massachusetts Corporation Registry, Oak Hill Properties, LLC is managed by Khosro and Eshagh Sanieoff of Brookline. Anyone familiar with the Boston real estate landscape will recognize these names straight away.

According to a public records search on the City of Boston tax assessor’s site, Khosro “Ezra” Sanieoff, 72, owns an estimated $25 million worth of Boston real estate (for those looking, beware, on some listings, his name is spelled “Khorso.”) Those units are concentrated in Allston and Brighton, but the name is affiliated with other real estate trusts as well. Eshagh Sanieoff, 79, appears as a trustee for the Oak Realty Trust, which owns several units in Allston.

Those concerned about the non-renewal of Great Scott’s lease can participate in open mic collective Bummer City Historical Society’s letter drive for patrons and concerned citizens to appeal to Oak Hill Properties. There is also a petition that has collected nearly 2,500 signatures as of this writing.

This article was produced in collaboration with the Boston Institute for Nonprofit Journalism as part of its Pandemic Democracy Project.

Hassan Ghanny is a writer, performer, and music journalist who currently resides in Boston, MA. He writes at the intersections of media, identity, culture with an intention to uplift people of color, empower people in diasporas, and address trauma and enjoin healing. He is a regular writer for Boston Hassle. His writing has been featured in Cuepoint, Tenderly, Burnt Roti and INTO.

Following the light with Jaina Cipriano

Catch "Dreamscapes: Following the Light through Immersive Design" at the 808 Gallery until Oct. 13