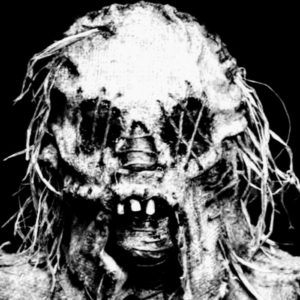 If the world ever needs a musical alternative to blood-doping, Kuebiko has it covered. On their new project, 4 Minute Warning, the band minces together their distant punk and metal predecessors’ most enduring methods, crafting four urgent tracks that speed towards destruction with roughage at its heels. With swarming melodics and the use of hardcore and crust’s most vital techniques, Kuebiko’s aptly named EP is a lethal flood of adrenaline.

The berserk sound of 4 Minute Warning isn’t exactly unheard of in terms of hardcore, crust, d-beat or any genre-adjacent releases, but its utilitarian approach to choosing and combining sounds is what gives it its own stench. “DEATH PIGS” opens with throttling drum speed reminiscent of early kängpunk style d-beat, and the track’s unremitting pulse and sewer-dredged vocals sync up in an unmistakably hardcore punk fashion. Simple but effective rhythms do the heavy lifting throughout 4 Minute Warning, while other style-defining methods rotate in and out of the project’s sound.

The second track, “POPULATION INCREASE”, ups the urgency and packs several minutes worth of dizzying distortion into just thirty seconds as the vocals push forward at an impressive pace. The vocal work here is great: inhuman sounding and at the same time littered with the kind of whirring angst that only comes from being human. This gargling multiplicity produced by Kuebiko’s choice vocals doesn’t provide discernible lyrics but it does enhance the besieging feel of the project.

“SNAPSHOT” is thirty five seconds of chaos thrown into an addicting balance. There’s an enhanced desperation here that makes the EP’s title seem even more fitting. The heavy compression gives way to the track’s erupting momentum, swinging and finally pulling in all different directions as it comes to a close. If there’s anything missing from 4 Minute Warning, it’s more moments like these. Individual elements are sharp enough on this final track to break out of the indiscernible mud while maintaining something of the subtle harmonies of the other three tracks.

Kuebiko provides a hard-crunched swarming dose of oxygen with 4 Minute Warning. In less than four minutes the EP is like a pocket-sized centrifuge for hardcore riffs and d-beat rhythms; Those who listen are sure to find rage congealing in their ears in the absolute best way possible.

Liked it? Take a second to support Grace Polat on Patreon!