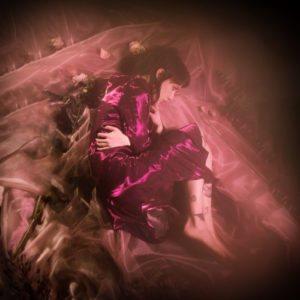 Kira McSpice’s “Aura” is the second in a four-part series that is inspired by the four stages of a migraine. Drawing inspiration from the stage of a migraine that is often accompanied by a number of sensory disturbances, McSpice captures the experience over the course of the album’s five tracks.

While McSpice uses the phases of migraines as inspiration for the format of the series, McSpice said in an interview with Astral Noize that she was aiming to explore the cycles that occur in different things, such as bipolar disorder, which McSpice suffers from. The nuances involved with living with mental illness are explored throughout “Aura.”

Challenger Deep begins “Aura” and introduces the album’s tone and theme of being detached from reality. The background vocals at the beginning of the track sound almost otherworldly, especially when paired with the synthesized ambient noise that runs under the vocals. This combination provides a sort of distancing effect, which is effective given the track’s theme.

When the main vocal line is introduced, the synthesized and echoing effects make McSpice’s vocals feel far away, like she’s a disembodied voice calling the listener from an unseen place. It makes the listener feel like they’re drifting through space, away from everything they find familiar, and this vibe goes with the track’s lyrics perfectly. McSpice sings about drifting for a year and trying to keep her head above water just to survive. Challenger Deep captures the essence of trying to cling to everyday life, even when you feel yourself drifting away, which is not an uncommon phenomenon for those struggling with mental illness. The last 40 seconds of instrumental dissonance help to solidify this feeling even further.

Line of Vision allows the listener to fully appreciate the musical content of McSpice’s work. The lyrics are minimal, featuring only one true line throughout the track’s two-and-a-half-minute run-time: “there’s something there in my line of vision.” This choice allows for a connection to the theme of aura (visual disturbances are part of the aura stage of a migraine) while also allowing the music to shine through.

This track features prominent use of synthesizer, played by Will Ponturo, which gives it a mysterious feeling. And McSpice’s vocals sound ethereal in Line of Vision, like she’s a siren inviting us to see what she’s seeing. Musically speaking, Line of Vision is one of the stronger tracks on “Aura,” and the minimalist lyrics help showcase that.

Scotoma, the third track on the album, is defined in the dictionary as “a partial loss of vision or a blind spot in an otherwise normal visual field.” It’s a fitting title considering the fact that temporary loss of sight is a common effect of aura in a migraine as well. This track has a haunting undertone to it, which the synthesizer and vocal elements mimicking voices echoing through the halls of an abandoned building at night. It takes the titular theme of temporary partial blindness to a whole new level; the tone of the song suggests something is lurking or hiding in wait nearby, just out of sight.

Compared to the album’s preceding tracks, Loon has a gentler vibe to it. It features a mesmerizing guitar pattern throughout the background of the track underneath the more dissonant background vocals. The lead vocal can be described as delicate which, when combined with the song’s lyrics, gives the track an air of vulnerability.

The lyrics of the song repeatedly refer to “you loon,” without specifying who the loon in question is. One interpretation of this track could suggest that McSpice is referring to herself, making Loon a delicate track of self-reflection that examines how mental health issues affect the sufferer as well as their interpretations of the world around them.

The final track on “Aura,” Hide, channels a longing to escape from things that haunt us from the inside. McSpice sings about how she “can run, move away, but I’ll always follow [her].” The background vocals and sounds work very effectively on this track. As the track progresses, the background elements get louder and more prominent until they overtake the main vocal line. It’s as if the thing McSpice is trying to escape from is getting closer and closer with each second.

Overall, “Aura” dives deep into exploring what it’s like to live with an invisible ailment, whether it’s a physical illness like a migraine or a mental illness like bipolar disorder. McSpice perfectly captures what it can be like to silently battle personal demons every day. “Aura” lays a promising groundwork for the final two installments of this series.

You can check out “Aura” by Kira McSpice on BandCamp.