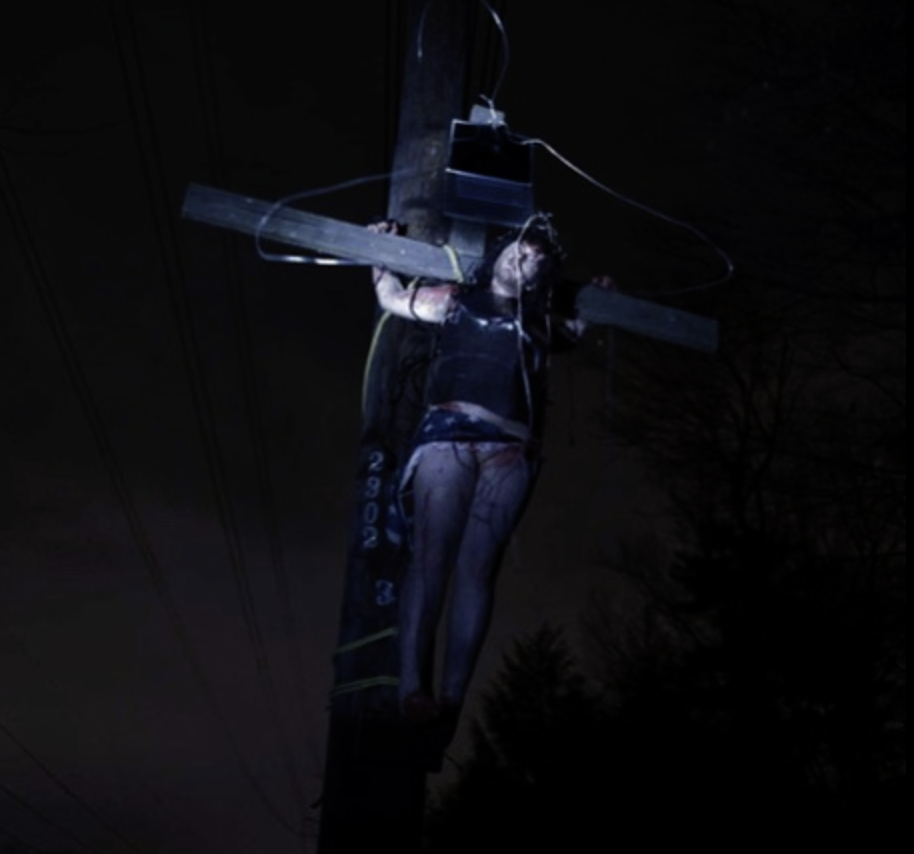 On the first anniversary of the Boston Marathon bombing, artist Kayvon Edson was arrested at the finish line while trying to carry out a performance meant to end with the handing out of business cards that filled the rice cooker inside his backpack. Edson faced several charges, including disorderly conduct and possessing a hoax device, which was detonated by the Bomb Squad. The device was the rice cooker filled with business cards, though news sources reported it to be filled with confetti or glitter. As their guns were drawn on him, Edson told the cops precisely what was in his bag, but they treated it like a bomb anyway: an act of either cautious wisdom or melodramatic overreaction, depending on who you ask. If you ask me, I’d say the latter. Cops love to mistake things for weapons when they’re ready to shoot someone.

The day this happened, my social media feeds were filled with posts by people—several of who helped comprise the Boston art “scene” at the time— expressing their outrage and disdain over Kayvon Edson’s performance. Many of them rejected the notion that what had happened was even art at all, posting examples of what they considered to be “real” or even “proper” public performance art. New York Magazine published an article that pushed these sentiments further, seeming to question whether Edson, who has Bipolar, was truly mentally ill as he claimed to be, and condescendingly closed the feature with “Congratulations, Kayvon. You’re finally famous”, as if there couldn’t possibly be any other motive or, even richer, that the art world isn’t already saturated and ruled by those desperately soliciting moments of attention.

I remember feeling really grossed out by all the Boston art people so quick to take the proverbial moral high ground against Edson’s work, exemplifying the squareness art in Boston is so famous for, especially in comparison to what goes on pretty regularly in other cities, or at least regularly enough. Why was Edson’s performance so incredibly unacceptable as a creative gesture that, despite its intentions, it was rendered not even art? I don’t recall anyone giving any concrete reasons for their opposition, except maybe some sort of disrespect for the dead. Mostly people just pushed a generic type of online snark common to social media users who wish to dismiss something without thinking about it critically. My take is that the performance was not only real art, but valuable art, for a myriad of reasons. The hysteria that surrounded the Boston Marathon bombing brought the city back to its misanthropic, provincial roots. Boston’s always been an “Us vs. Them” city. Whether its adversary is the British, The New York Yankees, Black people being forcibly bussed from other neighborhoods, or Muslim “terrorists”, Boston is more than happy to express its profound hatred. “Boston Strong”, the slogan Kayvon Edson chanted as he approached the finish line, was inescapable in the years following the bombing, repeated mindlessly, a brutish war cry, like “Sweet Caroline” at a Red Sox game, or “Send Her Home” at a Trump rally. That the bombing was commemorated on its anniversary with something stupid and reckless was far more appropriate than any mostly-crocodile-tears vigil that might be held for the four tragically killed, as we bomb the Middle East with abandon, without most people even knowing about it, never mind giving a fuck.

The notion that the performance could be a networking opportunity is perhaps my favorite thing. Had he been able to finish the performance without cops drawing their weapons and forcing him to put his bag down, he would have handed out the business cards that filled his rice cooker to any onlookers or passersby. That a transgressive, politically incorrect performance might fly in the safety of some gallery or academic institution and not on the street is the tension that lies at the heart of Edson’s work. After all, what, exactly, is an appropriate context for art? Is there one? Is everything art, or maybe nothing at all? Maybe art is just a smelly fart tented under a camel hair topcoat in the middle of February. This has been up for debate for a long time. Sometimes, people have answers to these questions. Then other people challenge those answers. Puffing out and contracting like a desperate lung, this foolish and profound conversation. And so it seems to go.

Generally speaking, people hate the mentally ill. Anyone who’s ever been unhinged enough to be considered a burden to their family knows this to be indelibly so. The media’s filled with plenty of shit that presents itself as something that promotes support and awareness. Absurdly underfunded organizations provide thinly spread services to those lucky enough to have access. People enjoy the social currency that comes with public displays of allyship without actually being there when their mentally ill loved ones are “displaying symptoms”. When I was hospitalized in October for 9 days in a psych unit for having suicidal ideations, the group therapies I attended talked a lot about radical acceptance. About accepting the things you cannot change, changing what you can, knowing the difference. That tired support group slogan. They also talked a lot about recovery. What no one ever talks about, except for some lovely harm-reductionists, is the true acceptance of people on their worst days, especially when bad days happen more often than good ones. 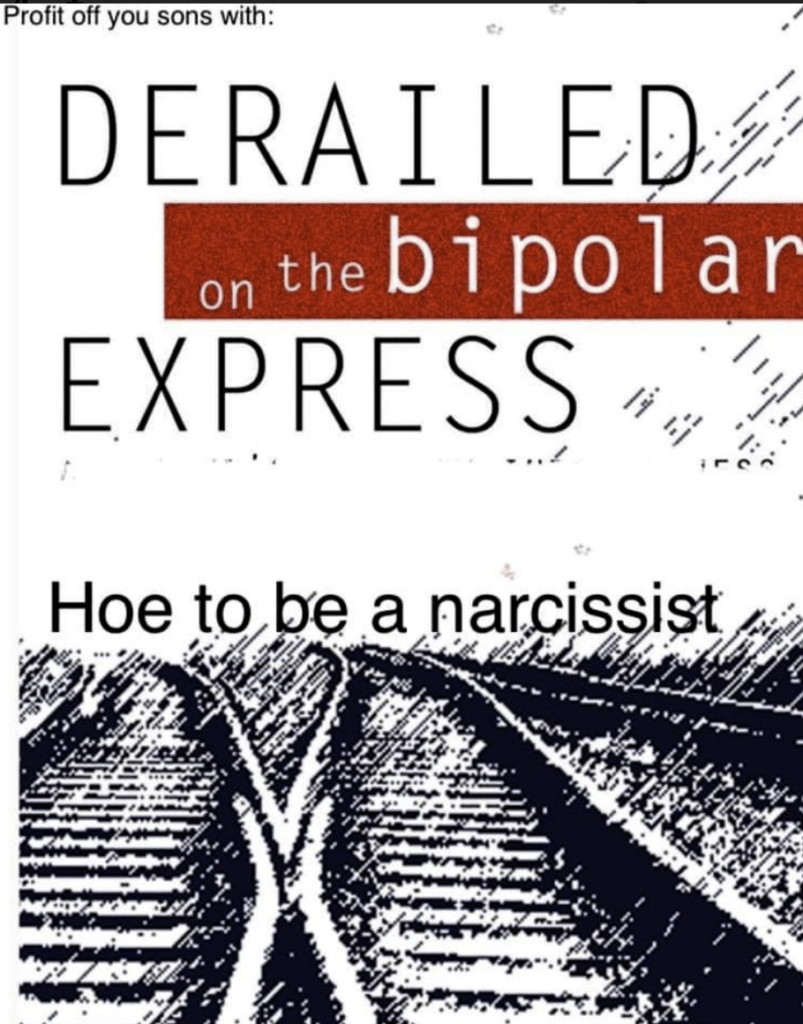 In 2018, Kayvon Edson’s mother, Joie Edson, published the book Derailed On The Bipolar Express: A Mother’s Journey Into Madness, about Kayvon and his brother TJ, who made headlines in 2016 when he was fired from Out of The Blue, Too art gallery after allegations of sexually assaulting a musician who’d played there were made public. Lumping your manic performance artist child into the same narrative of madness as your sexual abuser child is loathsome but not surprising. I haven’t read the book, but if the title is any indication, and I’m fucking certain it is, it’s just another drop in the very heavy bucket that is the movement of neurotypical people centering themselves in the conversation about neurodivergence. Lived experiences of mentally ill, autistic, and otherwise neurodivergent people are put on the backburner while the experiences of the people who surround them are given priority, spreading stigma that is, at best, a picture of extreme difficulty and, at worst, a downright horror show. Join any Autism-focused Facebook group, and you’ll see that it’s dominated by the accounts of family members whose stories of begrudged tolerance paint pictures of people who are pathologically awful and worthy of little more consideration than tragic sympathy. I use this example because I’m Autistic and have seen it first hand. Bipolar Disorder, which is what Kayvon Edson has, is no different in this regard.

Edson is not just an artist who’s mentally ill. That would be unremarkable. He uses the stuff of his mental illness as raw material. It doesn’t simply embolden his work, it is the work. In a culture where social boundaries are almost a new religion to the young liberal and leftist alike(but differently), Kayvon breaks boundaries in a way that is crucial to the question of how we see one another, and how we separate ourselves from one another. Society is broken down into hierarchies of validity. People with lots of money and perceived success under capitalism are at the top of this list, while the homeless, the mentally ill, and the variably dependent are at the bottom. To be clear, I hate this breakdown, but it’s what a capitalist society mandates and is where we’re at, to be opposed at all costs. By acting out his manic impulses in the context of art, Edson dares the public to connect with what is readily dismissed. Someone used to living in a larger city might tune out the eccentric, loud, unhinged, and confrontational as a reflex. But the value of such an exchange is heightened by the artist’s very specific intentions.

Edson explained to me that his work aims to break down the social boundaries that people take for granted and are separated by. It is a privilege to ignore people you find inconvenient, though many would argue that it’s an act of self-care. When I met him for an interview, I sat waiting at the bar in North Station. Before I could approach him, I saw him getting dragged out of the building by security. He had on a large beige leather hat that, like all of his garments, he made himself. I followed him outside and asked him why he’d be removed by security. He told me he’d intended to perform so that I might document it. He was going up to strangers and demanding to know who their clothes were designed by. Aggressively taking up space and attention is also a privilege. Anything can be broadcast for a price, and we accept this broadcasted information from those who pay. Ads everywhere, and we consider them inevitable. A stranger asks for change, or for the designer of your outfit, and we scoff.

Edson’s work, which features conspicuous, well-crafted clothing(he was a fashion student at Parson’s in New York before transferring to MassArt) mixed with items and slogans from the asshole of mainstream culture(“Boston Strong” chants and MAGA hats) exists not only on the fringes of the art world, but society itself. As someone whose mental illness has caused much tumult in my personal life, I find Kayvon Edson’s work somewhat heroic. There is a sweet pureness to what he does. Sweet because he really cares that American society runs on degradation and disenfranchisement. Pure because he really believes in his practice. Despite arrests, hospitalizations, homelessness, and ridicule, he sticks to his vision of radical tolerance in a world where no one truly belongs. Make sure to keep your eyes peeled for his autobiography, a direct response to his mother’s smear, which should be dropping later this year.

The Unnatural / Don’t Hassle Me!