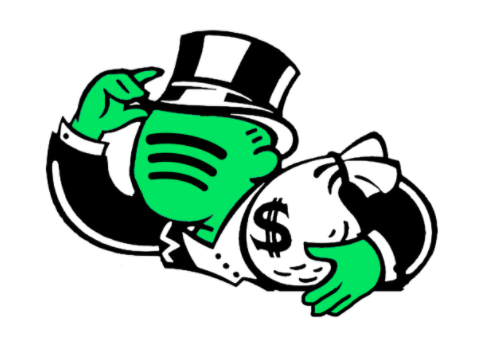 Boston Hassle recently interviewed Joe DeGeorge from the Union of Musicians and Allied Workers (UMAW) about their most recent action calling for Justice at Spotify at Spotify’s offices around the world. Joe also plays in Downtown Boys and Harry and The Potters and is based in Providence, RI.

UMAW needs help building up its Boston chapter. So if you are a musician or allied worker, please consider joining their cause to work on the Justice at Spotify campaign and many others.

This interview was edited for length and clarity.

BH: How did UMAW first form?

JD: It started on a zoom call with a bunch of musicians, we had known each other from working together or a lot of us had built solidarity running a few other campaigns. One of them was the campaign at SXSW trying to get them to remove that nasty immigration clause they had they that they could deport you if you played a show at a non-officially sanctioned SXSW event. So there was public pressure, through that campaign from musicians around the world, put on SXSW to make changes to that clause. We’ve run a campaign the ‘No Music for ICE’ campaign trying to draw attention to Amazon web services that provide much of the surveillance arm and hosting for a lot of policing, including ICE.

So after seeing what’s possible to get musicians and other music workers taking collective action and being inspired. We said, instead of trying to build from the ground up each time there is a campaign or something needs to be done, why not just have a union that is active in many areas of the industry taking on multiple things at once.

There are other music unions that we’re in solidarity with, but there were issues we thought weren’t being addressed, and wanted to provide a space for musicians and other music workers to address them.

BH: Who qualifies for this union?

JD: It’s the union of musicians and allied Workers. So are you an allied worker? Are you a musician?

BH: More directly, if I am music press, am I considered an allied worker?

JD: Yeah I would think so. We have people that work on labels in the union and other sorts of people in the industry. I would say the bulk of our membership is musicians, but it is also important to be building solidarity with other workers.

BH: Tell us about UMAW’s recent action at Spotify offices across the world? Why call for justice now?

JD: In the Fall we had launched our Justice at Spotify Campaign with a list of demands that nearly 30,000 musicians and allies have signed onto. One of the major demands is an increased payment. Other streaming services offer average payments of nearly a cent per stream. So the first demand was market parity from Spotify in their royalty payouts.

The other demands have to do with transparency. They have a lot of closed-door deals that happen between labels, putting getting special playlist placement, a lot of things that are payola, which is illegal in terrestrial radio, though Spotify is not classified as such in the US. Nonetheless, a call for the end of payola at Spotify & practices similiar to payola.

After we launched this campaign they announced a new system they have where artists can opt to take a lower royalty rate in exchange for playlist placement which amounts to payola.

Music workers also want credits and liner notes on Spotify which are not there or uniform. Spotify has also been engaged in legal battles in circuit courts in DC where they are fighting scheduled increase royalty payments. We are also calling for the end of these legal battles.

BH: Should we cancel our Spotify memberships?

JD: That hasn’t been the ask of this campaign yet. I think a big part of this campaign so far has been building awareness. In a lot of ways with this action, we were trying to build solidarity and get a seat at the table. Since the outset of the streaming industry, we have just been handed the terms of service and terms of use by tech corporations. We just click ‘accept and continue’ both as users and people that license our work to be used at Spotify. We don’t get a chance to negotiate our rates unless we can put pressure and act collectively and globally as a united body.

BH: You need a seat at the table.

JD: Right now, there really isn’t a labor force that is keeping these tech corporations in check in a lot of ways. We are certainly inspired by gig workers organizing around the county, so we see this sort of organization as necessary, and the bigger the union is the more powerful we can be in bargaining and putting pressure on these tech corporations.

BH: What is next from UMAW? When do you think we will be hearing from you all again? Do you have any actions planned?

JD: Yes, I have been mostly working on this justice at Spotify campaign. There has been many other aspects of the union that other union members can speak better to than myself. We have committees addressing issues with labels, issues with venues, immigration. They are trying to compile for immigrants working in music in the US specifically. There is also a police abolition committee and other campaigns. Justice at Spotify is one of the Union’s more public facing campaigns that we have done. We’re less than a year from starting this organization so we’re still working building that power.

Regards to the Spotify campaign specifically, we have been waiting to see if Spotify addresses any of those demands. I think today without explicitly mentioning our union, Daniel Ek did unveil an attempt at some transparency. It is not really answering or addressing our demands as we stated them.

BH: Did you go to the Boston Protest?

JD: Yeah I attempted to deliver the letter to the offices there.

BH: How many demonstrators came to the Boston demonstration?

JD: There were only about six folks there. I was coordinating the demonstrations around the world, so the past couple weeks I have been on the phone with people in Madrid, Berlin, Stockholm, and Melbourne. This was exciting because it was the first time we have seen music workers collectively organizing in their own economic interests, globally taking on a tech corporation like this.

BH: It’s exciting to see. This campaign has gotten a decent amount of press. Most people hate Spotify because they don’t pay and they are just this faceless tech corporation that doesn’t contribute any creative value, they just siphon off of the people creating the product.

JD: I think part of that public perception helps Spotify be a good rallying point. We see a problem, it is just exploitative for artists. There are better ways to do a service like this. Why are we accepting and continuing with Spotify’s model? I think it gives people pause in the moment to ask that questions for themselves. I think collectively, working in this union, we can help direct some of that conversation and figure out ways to build more worker power in this industry.

BH: Is there anything you want me to plug in this piece?

JD: Yeah, if people are interested in forming a local in Boston, get in touch with us. I think that would have helped some of our organizing efforts.

If you liked this interview consider supporting Boston Hassle on Patreon.