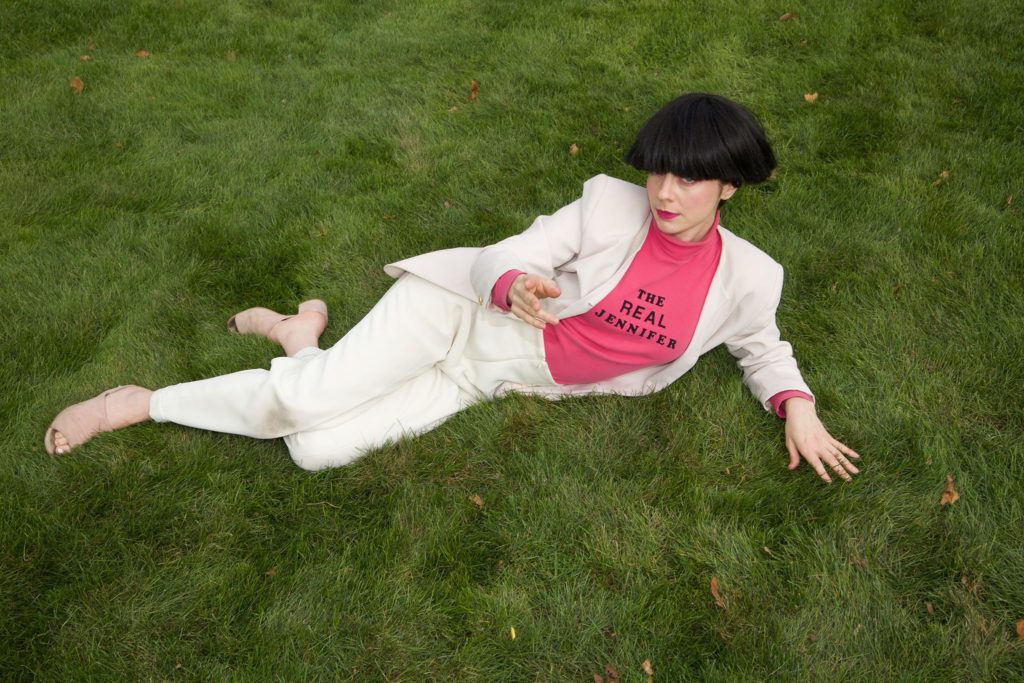 Something strange and wonderful is happening in Ridgewood, Queens. A sort of femme-android turned fitness cult leader, Jennifer Vanilla has been steadily crafting a space both online and in real-life that explores the intersection of music, experimental theater, improv comedy, and television production.

A few weeks ago in Cambridge, I witnessed Jennifer with an odd black mushroom cut and a patchwork clown suit burst forth into electronic dance music and monologue. Something was happening. There was confusion…what is she doing with her hand in that red stiletto? There was comedy…she’s really been staring at herself for quite awhile… There was danger…what will she do next? In her syrupy, too-polished world, she seemed to explore so many of the themes of our own world: personal relationships, community, self-help and self-recovery, narcissism, our bodies, the role of a performer and the spectacle…to name a few.

Jennifer Vanilla’s absurdist leanings and prolific creative output place her in a strange new territory, somewhere between musical artist and iconic late-night comedian. On her Youtube channel, there’s an entire trove of videos, music, dances, experimental broadcasts, book readings, and other glimpses into Jennifer’s life. Of these, the ongoing program “The Jennifer Vanilla Hour” is perhaps her most cohesive and delightful. An hour-long showcase mostly shot at The Windjammer in Queens, it features Jennifer Vanilla as well as an entire rotating cast of characters and Jennifer duplicates doing amazing improv comedy, wonky sketches, dramatic music, engaging dance routines and more in front of a live audience. At its best, it’s a transcendent hour of no control, a room full of people not feeling afraid to just try things out.

To me, Jennifer’s broadcast is incredibly pure and honest. She wants us to be the best version of ourselves, to shed our old ways and transcend personal trappings. She seeks to entertain as well as fulfill her great mission…she wants you to be as great as Jennifer is, too. Through a process of music, dance and monologue we witness her and in turn witness the absurd spectacle of life.

Catch “The Jennifer Vanilla Hour” live, first Tuesday of every month @ The Windjammer in Ridgewood, Queens.

Liked it? Take a second to support Charles Perrone on Patreon!