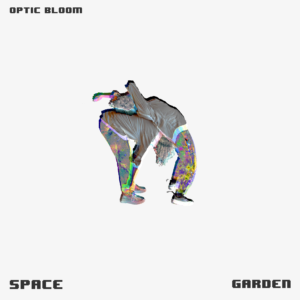 The long-awaited debut album by wünderkind duo Optic Bloom is here, and the world is better for it.

When we last heard from Optic Bloom, they had just announced being among the artists headlining BAMS Fest 2019. In the full year since then, creative partners FlowerThief (they/them) and Dephrase (he/him) have been cooking up Space Garden, a short but massively exploratory debut album. Creatively drawing from soul, R&B, and trip hop, the album explores themes of mental health and interdependency framed through the lens of QTPOC livelihoods. If you like Portishead, FKA Twigs, Jill Scott, even The Avalanches or Glass Animals, Space Garden has something to offer you.

Starting from intro track “Part Time Friend”, we hear FlowerThief’s syrupy vocals, reminiscent of British trip-hop crooners the likes of Martina Topley-Bird and Elisabeth Fraser. Sometimes Dephrase’s beats fully cascade around FlowerThief’s vocal runs; elsewhere, FlowerThief commands the track to steamroll forward, as in “Movement” featuring Latrell James. Evoking a “millennial uprising”, “Movement” is itself a standout track, second only to the unexpected, minimalistic diaspora pop track “Root Down”. The album is rather short at 32 minutes, but is completely seamless throughout, nimbly bridging the gap between soul, spoken word, and stream of consciousness.

The meaning of these songs, perhaps written before the COVID-19 pandemic, are not lost on our current times at all. “Tropical Depression”, a self-proclaimed ode to being sad when it’s hot out, takes on a new meaning in this our antisocial COVID summer. “Vow to Be Free” returns to this theme of mental health with the help of Boston heavy hitter Oompa. Elsewhere, “Other Girls” is an expression of an ambition towards #CarefreeBlackGirlhood, made complicated by FlowerThief’s trans identity and longing for what is still rooted in gender norms. By the time we get to final track “Side Effects”, the feeling is triumphant, but still yearning for more and in greater volume.

If you didn’t catch Optic Bloom streaming live on Thursday, July 16 as part of their collaboration with The Jungle and ONCE Somerville, click the link to view the performance.

Space Garden is out now for streaming on Spotify.